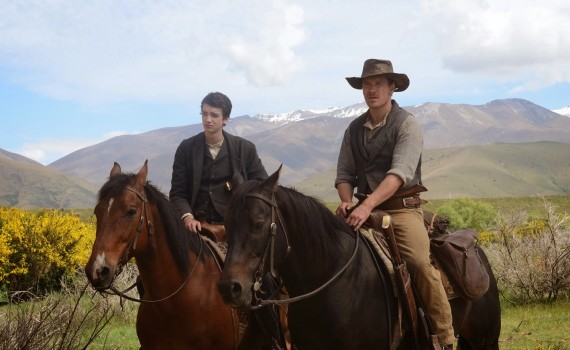 Traveling slowly west across the American plains is a young man named Jay, a Scottish aristocrat who finds himself very far from home.  After a tragic accident, his love, a poor girl named Rose, was forced to flee with her father across the Atlantic, finding a new home away from the punishment for a crime she didn’t commit.  Jay is determined to find her, no matter what the cost, and no matter how little he knows about survival.  Luckily, in some ways, he meets up with a rogue gunman named Silas, a trail-wise cowboy who wants to help keep Jay alive, for his own probably ignominious reasons.  But Jay doesn’t understand the game, nor has he witnessed the cruelty of this land, something that is bound to catch up with him sooner or later.  And in the form of an outlaw leader named Payne, Jay is about to be taught the hardest lesson; that love doesn’t always conquer all.

Payne is the leader of a group of deadly bounty hunters, a gang that Silas was once a part of.  They are a vanishing breed, but as the ex-killer so eloquently puts it, the best are the last to die.  Payne & Silas are members of an evil brotherhood of men that Jay can’t possibly understand, not only because of his youth and his foreign blood, but because of the way he sees the world.  To him, the stars are constant friends, the wooded paths have endless possibilities, men are noble, and each fantasy has a happy ending.  In Scotland, Rose would often call him a silly boy, and Jay will soon find out just of boyish he is, especially compared to the harsh men of the Wild West, a place were kill or be killed is not only a necessary part of life, but a feature of every single day.  Learning this will be the beginning of Jay’s education, and if he doesn’t learn quickly, the end of it as well. For a first-time writer/director, Maclean does a lot of things right in Slow West.  First, he leaves the story classic.  Young love, a journey, a seasoned veteran who has a bigger heart than he lets on, an evil gang of wrong-doers; it’s a typical formula, one that couldn’t go too wrong if you just let it play itself out.  So Maclean trusts the recipe, throwing in his own flavor slowly, letting us relax & accept the plot as it comes.  Genius really, using a light touch to succeed where so many others would have failed.  A little humor here & there, a little more character revelation, knowing when to let the scenery speak for itself and when to tell the audience the story; well done all around.  And then there’s the acting, which could not possibly have been better.  Smit-McPhee, Fassbender, and Mendelsohn were all excellent, sliding into their roles seamlessly and trusting the director to guide them down the right path.

The film ended up less bloody & less over-the-top than I had thought it would be, while still reminding me of a dark, Western version of O Brother Where Art Thou.  And hey, if Maclean leaned heavily on classic Westerns and mixed the old formula with some Coen Brothers, more credit to him, that’s just smart.  That describes the film as a whole; a smart delivery that’s sometimes comic, sometimes heavy, and always entertaining, with a deep core that holds it all in place.  It was like a fairy tale set in the American wilderness, a plot that could end with happiness for all or with Shakespearean tragedy, pivoting both ways throughout the progression of the story.  There were times the film was tongue-in-cheek, times when it was perfectly classic, times when the audience was allowed to step away for a break, and times where it was either laugh or cry.  Slow West is a film that correctly captures a wonderful, undefinable vibe that makes watching a pleasure. Video – With an aspect ratio of 1.66:1 16×9 Widescreen 1080p HD, the video quality of this Blu-ray is about as good as you can get.  The film was shot using an Arri Alexa camera with Panavision Primo vintage and Zeiss Ultra Speed Z lenses.  Also, Frazier lenses were used for one scene.  The picture quality of this movie is spotless.  The clarity of the Blu-ray is perfect, with a crispness that you can only get from this medium.  And the visuals that greet your eye throughout are some of the most beautiful you’ll see on screen, with sharp colors and a great eye for detail.  It’s stunning really, not to use an overused word, but that’s the only way to describe such amazing video.

Audio – The Blu-ray is presented in English 5.1 DTS-HD Master Audio, with subtitles available in English, Spanish, or English SDH.  The audio quality is excellent, without the unbalanced sound that you hear too often of Blu-ray films.  The sound was presented in solid fashion, with great effects and even better music.  The background music is phenomenal, setting the mood and carrying the pace of the movie.  There are even a few performed songs along the way, adding to the O Brother feel.  The audio is just as good as the visual, which is saying something.

Extras – There are many extras available on the disc.  On Strange Land: Making Slow West is a 7-minute featurette and behind-the-scenes segment that quickly gives audiences a peek into the process.  Two Deleted Scenes can be viewed: Hunters Cabin, 4 minutes that feature Jay in a dangerous situation, and Am Bata Uaine performed by Ali “Beag” Macleod, a 4-minute Scottish song.  There are four trailers available to watch: Ex Machina, Cut Bank, Beyond the Reach, The Homesman.  Lastly, the menu has a Bookmarking feature for your convenience. Highly Recommended.  There are an incredible number of reasons you should check out Slow West.  The first is the Western vibe done right, something that isn’t accomplished often enough.  Maclean’s direction, though amateur, comes across as very professional, especially in the way he relies on those that have come before without ripping them off.  The acting in the film is some of the best you’ll see this year: Smit-McPhee continuing his grown as a young up-and-comer, Fassbender showing why he’s the hottest name in Hollywood that’s not ‘Tom Hardy’, and Mendelsohn portraying the evil Payne with frightening relish.  The film is visually excellent, with a video quality that’s near perfection, boasts an awesome soundtrack, with audio immaculately delivered, and a disc that’s full of special features.  The only negative that I can think to say is that I didn’t fall in love, didn’t rush to rank it with my favorite films.  I’m not even sure why; I can’t point to any piece of the project and claim that it failed.  Slow West is a great, great quirky Western adventure with a ton of heart and talent to spare.  If it doesn’t end up as one of the best films of the year, it’s only because it lacks that undefinable x-factor/it-quality that no one understands anyway.  That can’t be a criticism, and the film doesn’t deserve much, as it succeeds on all levels and left me extremely satisfied.