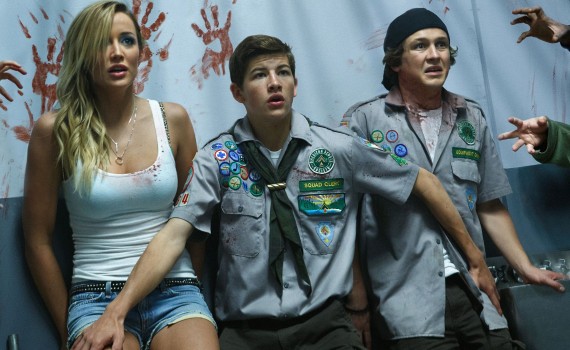 Zombie movies are here to stay, whatever the reason.  Even the best are incredibly unbelievable, go against every scientific principle, put there characters in unrealistic situations.  And yet, this odd combination of horror and sci-fi has become a mainstay of American cinema, setting the scene for countless dramas, fantasies, and comedies.  Scouts Guide to the Zombie Apocalypse pays homage to the genre, especially the comedic side, while adding in the high school coming-of-age element that we have also shown that we love.  It’s 28 Days Later meets Idle Hands; an unusual pairing, but a concept that could have worked, given our preexisting penchants.  But, and unfortunately, it’s the cheap parts with the film that ultimately make this vehicle stop running, not the story, proving that talent is needed to sell even the most attractive product. Being a Boy Scout isn’t cool, let’s just put that out there, and for Ben, that realization is about to change his life.  He & his friend Carter are preparing to tell the third of their trio, Augie, that their Scouting days are over.  They’re tired of being made fun of at school, not getting the party invite, not getting the girl, and sleeping in the woods on the weekend disrespected & unsatisfied.  But Ben & Carter agree to one final Scout outing, where Augie will receive his final badge, even if they’re planning to sneak out to attend a senior party at some secret locale.  Sounds like fun, but a major problem across town that the boys are completely unaware of is about to rock their collective world.

A virus of some sort has escaped a research lab, turning its hosts into neck-biting zombies, and then, of course, turning those people into zombies who also want to bite necks, and so on & so on; you know the drill.  Only, the three Scouts are in the woods, and when they come to town late at night to find the party, they find man-eating zombies instead.  Teaming up with a stripper named Denise, they’ll try their best to survive the night.  But first, they have to find that party, no longer to get laid, but to save their crushes Kendall & Chloe.  These Scouts are prepared for action and they’ll stick together no matter what; killer cats, undead Scout Leaders, army bombings, and naked zombettes be damned. I was prepared to love this movie, and perhaps I would have had I still been sixteen.  It has all the elements of a cult classic that teenage me would have loved to hold onto forever; comedic action, kooky characters, hot girls, awesome weapons, real camaraderie, and a story that’s just unique enough while still staying true to all those that have come before.  And with an hilarious intro that kicked things off just right, Scouts Guide was on its way to cult status.  But there were just too many glaring errors keeping it from greatness.  Not the story, that was smartly set up.  Not the groove, that was classic in every way.  And not the special effects, those were done well enough to be fun while remaining silly enough to be watched without cringing.

No, the problems came mainly from the poor actors & stereotypical characters.  David Koechner as the Scout Leader was too goofy & expected.  Joey Morgan as Augie was insultingly the chubby guy who has smelly poops.  Logan Miller was the slacker friend and Ethan Embry wannabe.  Halston Sage was the hot sister with zero personality.  Sarah Dumont was the Boobs Who Can’t Act.  And even Tye Sheridan, who I have loved in many films and have been excited to watch grow as a professional, was completely one-dimensional and completely boring.  I know this a zombie movie, I know it’s meant to be a little ridiculous, and I know you have to forgive its imperfections in order to enjoy it.  But while I did find it entertaining, I expected a lot more originality & humor and to love more than the one scene where the boys deck themselves out with homemade weaponry on their way to save the day.  That was by far the best part, with the rest feeling extremely amateurish, laden with forced curse words, tired dialogue, and bad acting. Video – With an aspect ratio of 2.35:1 1080p HD, the Blu-ray disc delivers the video quality you’ve come to expect.  The film was shot using an Arri Alexa Plus 4:3 camera with Panavision C-Series and Cooke Xtal Express Lenses.  The picture quality is very nice, with a great clarity and use of color when needed.  The second disc in the set contains the DVD feature film, done in 16:9 Widescreen.

Audio – The Blu-ray was done in English 5.1 DTS-HD Master Audio, with many language options: French/Spanish/Portuguese 5.1 Dolby Digital or English Audio Description.  Also, subtitles are available in English, English SDH, French, Spanish, and Portuguese.  The audio was well-balanced, without the special effects blow out of some Blu-ray action films, and aided by a nice soundtrack.  The second disc DVD features the same audio options. Rent It.  Scouts Guide to the Zombie Apocalypse isn’t quite strong enough to get credit for being an audacious zombie movie that we’ll be enjoying for years to come.  It does borrow from comedies of the past, does stick to the common undead formula, and does provide some fun for 90 minutes for audiences not expecting a whole lot.  But it never provides that original element that would have made it something special.  Even the acting was below par; surprising from a kid I had pegged as an up-and-comer.  The video is strong, the audio good, the extras plentiful, so for a super fan this could be a Blu-ray for the collection.  But it just isn’t that magical stand-alone comedy that I had hoped for, with too many major issues to ignore.  Likeable but not great, this film will be no more than a rental for most.