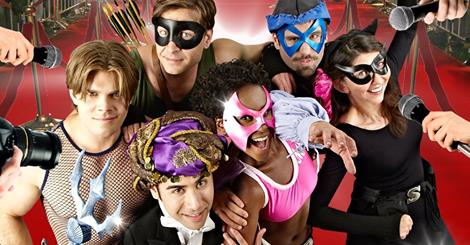 I think I hit upon The Real World at the perfect time.  I starting watching it, Road Rules, and all the Challenge shows right around 2000, expand out a few years on either side.  This was after the show had been on for a while, after it tried its best to be a socially responsible program, one that showed real people in real situations trying to deal with real problems.  AIDS, racism, sexism; important issues but a little bit boring.  Later, when I gave up watching the show, it had become a mess of drunken college kids and their random hookups; entertaining, but stupid.  Right in the middle of those eras was a time of drama, years of love, angst, and beautiful scenery that I just ate up.  Hawaii, New Orleans, Las Vegas, Paris; sure these seasons had their share of social discussion and drunken hooliganism, but they were the golden age of the show.  If Real Heroes did nothing else, it reminded me of The Real World and the enjoyment I got out of that program.  I didn’t even mind seeing it mocked or turned on its head by a bumbling group of wannabe superheroes trying to save the world. Calling all super boys and girls!  A casting has just started for a new reality TV show in LA, one featuring superheroes of all talents & ages.  Do you have a super power or super talent?  Do you want to live in a house with others of your kind, fight evil villains, and play beer pong?  Well have we got a show for you!  This new idea will be a big hit with guaranteed exposure, and superheroes have begun lining up at the door.  Big Shot, hunter & archer extraordinaire, a lone wolf who eats bad guys for breakfast.  Sable, the elder stateswoman, a true fighter of crime accompanied by her daughter/sidekick Vixen.  Malibu Action Girl, whose daddy buys her all the latest weaponry.  Water Warrior, with the power to talk to fish!  And Psychic Sam, a man who knows the clues before the crooks have even left them behind.  This team of super sleuths will join up for the ultimate reality TV challenge.

Problem is, this group of heroes isn’t very heroic.  Big Shot is ultra-paranoid of any movement in his periphery, Sable can’t get along with her teenage daughter, Malibu just wants to get her nails done, Water Warrior has a brain about the size of his fish pals’, and Psychic Sam solves all his crime via phone.  So the producers step in to make the show a tad more exciting.  Super villains are at large, plots are merging with plots, the world might be destroyed, but hey, it’s all in a day’s work for a hero.  That is, if they can learn to work together, stop drinking, accept their differences, and fight crime as a team.  So hang on to your butts, this is gonna be a wild ride, one full of adventure and intrigue, a fight that might come down to the final punch. As a fan of The Real World, or at least a past fan, the best part of Real Heroes is the obvious love for bad reality TV.  There are a ton of moments that feel like they were pulled straight from the shows I used to love; roommate spats, strangers in the house, drinking, hitting the clubs, confessionals, immovable morals, and ultimately friendship.  This film is a well-made spoof of the television genre that was crafted by someone who, like me, must have loved those old shows despite how terrible they were for your brain.  There were even a few hookups, though like the show, all gory details must have been left for the bloopers show.  It’s a silly 90 minutes spent watching mostly-dumb super heroes try to do their job while also trying to get along; something that’s perhaps easier said than done.

But how many people can you hook with this premise, how many people love the content that’s being mocked?  What’s more, once you get past the funny premise you’re not left with much else.  It’s one of those movies that you can tell was a ton of fun to make, probably more fun that it was to watch.  I would have loved to be part of the cast, pretending to be a hero, pretending to be Colin from Hawaii, but it just wasn’t as fun to watch from the outside.  It was cheaply made and thought up on the fly, with a jumpy feel that was entertaining at first but quickly got boring.  That’s basically the whole thing in a nutshell; there was a concept here that worked a little, but quickly lost any magic that it used to reel me in. Video – With an aspect ratio of 16×9 Widescreen, the video is nothing to write home about.  The film is shot like a documentary, or a reality show, or whatever, without much effort given to the actual visuals.  Special effects that might have been used were glossed or skipped over, and no shot was visually appealing.  The picture quality was low; low to very low.

Audio – The DVD was done in both English 5.1 Surround and English 2.0 Stereo.  There is an option for English, French, German, or no subtitles.  The audio quality is as poor as the video, with any technical aspects simply pushed aside and written off as part of the “reality”.  The sound quality was fine, with a bit of music and with a few cool comic book graphics to offset the action.

Extras – There are a bunch of extras on the disc.  The Sidekick Mystique, eleven minutes of five total “episodes” featuring the sidekicks of the movie.  The Water Warrior Workout, seven comedic minutes of wisdom from the Warrior.  Desperately Seeking Sidekick, eleven minutes of six total “episodes” of one-on-one conversation with Big Shot.  Meet the Heroes!, fifteen minutes of twelve behind the scenes interviews & footage of the cast and crew.  Things We Did For Money, four ways in which the film attempted to finance. Lastly, a theatrical trailer and an artwork slideshow. Rent It.  The film piqued my interest based on my past love of reality TV, but lost me when it came to the actual film.  You could tell that the crew had a great time piecing together this project, but sadly we were left out of the joke.  It’s a fun time quickly passed, but not worth much more than that.  The video was poor, so was the audio, but the disc did have a lot of extras.  Watch for some cheap entertainment, but don’t expect much.