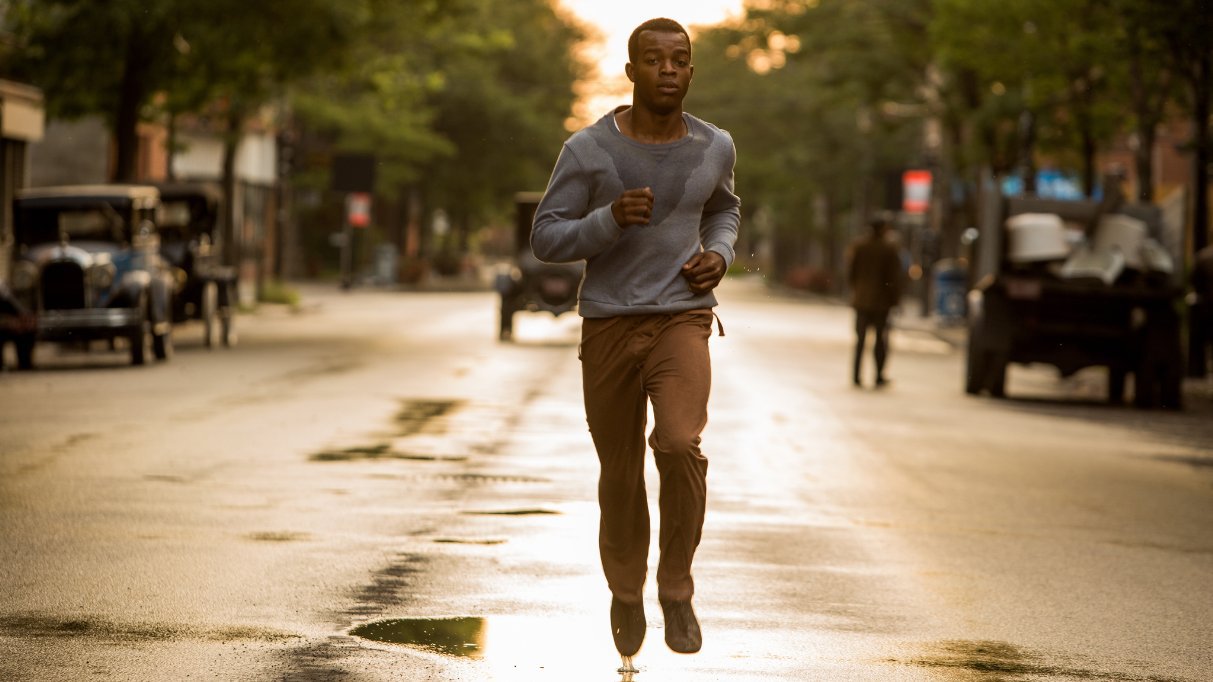 Living in Columbus, Ohio, I know the importance of Jesse Owens to The Ohio State University and the pride they take in his accomplishments.  I also know, as progressive as this city likes to imagine itself to be, it wasn’t always that way, and it is still far from perfect.  This story, an emotional biopic of Owens and his attempt at Olympic gold, brings to the forefront many important issues and concerns, the most basic being how we view race and how our differences have always been barriers.  The film tackles tough subjects and successfully weaves together a biography with history, that concept readily apparent in its weighted title.  But as a movie, Race falls just short of the classic sports films we earnestly love, relying perhaps too heavily on the gravity of the time period and forgetting that we also need to be entertained by both the actors & the characters, something that was sorely missed here.

During a time of great poverty and prejudice, Jesse Owens runs toward an almost unattainable goal; college, marriage, a good life for his daughter, a brighter future than has ever been reached by a member of his family.  In Cleveland, Ohio, Jesse is poor, an unmarried father, a kid with a dream and worn out running shoes.  But his big chance comes after impressive showings at track competitions across the country, landing him an opportunity to attend OSU in Columbus, a big step in the right direction toward success.  Jesse joins the track team in their bid to become relevant in the Big 10, giving coach Larry Snyder hope that his squad will rise from the ashes of the program, that they fly fast once again.

Combining Snyder’s experience with Owen’s natural talent, OSU becomes a track & field force once more, with Jesse dominating sprints & jumps.  Though constantly battling racism, segregation, poverty, and family commitments, Owens quickly improves as a runner, even training toward a spot on the American Olympic team.  But this year’s games are to be held in Germany, the recent breeding ground of the Nazi party, headed by Chancellor Adolf Hitler.  The ill-treatment there of gypsies, Jews, and anyone of color has some demanding that the US boycott the Olympics as a whole, sending a message to socialist Germany that human rights violations will not be tolerated, putting Owen’s gold medal dreams in serious jeopardy. The true story aspect of the film speaks for itself.  What a fascinating moment in history, with the Nazis gaining power, a war in Europe brewing, America attempting to decide how it will stand, and sports playing a large part in the propaganda of all sides.  We are already fairly obsessed with WWII as it is, battle scenes or no, so to see its genesis through the eyes of athletes is a very captivating thing.  This really happened, Owens really had to decide whether or not to attend the games, his races really were slaps in the face of Nazi Germany, and to see such key events depicted on screen is a real treat.  That he represented my city is cool as well, as are his records, awards, accomplishments, and the realization that he faced it all during a trying time that we can only imagine.

But that doesn’t mean the movie succeeded as well as its premise, or that it was as compelling as its true story aspect.  Putting aside that I enjoyed seeing impactful history played out before my eyes, the film wasn’t a very strong representation of the talent involved or of the emotional sports genre in general.  I understand that it must be terribly difficult to balance cheesy moments, believable heart, and solid acting, but Race missed the bullseye by just a hair.  Both Stephan James and Jason Sudeikis were pretty bad, playing their characters much too one-note, giving in to the stereotypes of the moment & the genre instead of infusing them with original depth.  The side characters were also more melodramatic than realistic, giving the entire film a fake quality that wasn’t helped by bad CGI and unbelievable backgrounds.  A film like Rudy works because it’s simple; Race failed to reach that benchmark because it quickly became overly complicated, visually overstimulating, and a bit of an emotional mess. Video – With an aspect ratio of 2.35:1 (1080p HD Widescreen), the video of the Blu-ray disc is top of the class.  The film was shot using an Arri Alexa XT Plus camera with Hawk V-Lite, V-Plus and V-Series lenses.  Its picture quality is very high, with a bright use of color and crisp images throughout.  The CGI of the film is too obvious, giving many scenes a unfortunate green-screen look, the cinematography as a whole failing to impress.  But the movie’s clarity & crispness is off the charts.

Audio – The Blu-ray audio was done in English DTS HD Master Audio, with subtitle options of English SDH, Español, or Français.  Menu button & ticker sounds can be turned off in this section as well.  The sound quality of the film was quite nice, with a good balance between dialogue & music that is often missing from more action-packed Blu-ray discs.

Extras – There are a variety of special features available on the Blu-ray.  The Making of Race is a 4-minute behind-the-scenes segment.  Becoming Jess Owens is a 4-minute character study with insight into the casting of the character.  The Owens Sisters is a 3-minute interview featurette with Owens’ daughters.  And lastly, there are six previews with an option to play all: Hyde Park on Hudson, Kill the Messenger, Moonrise Kingdom, Dallas Buyers Club, Promised Land, Closed Circuit.

Recommended.  Race is good but not great, an underwhelming attempt to tell a wonderful story that fell just short of reaching the feel-good/look-good status of our sports genre favorites.  So many have tried & failed to pull off what is becoming increasingly more improbable, and with much less solid back stories than this one.  The pieces just never came together; acting that was a little too weak, visuals that were a little too fake, moments that came off as a little too dramatic, and a general feeling that the film was playing up certain aspects of Owens’ persona while downplaying others.  The authenticity of the movie just wasn’t there, and so it never lived up to the potential of its compelling true story.  The video was great other than the CGI, the audio was strong, and there are extras available for anyone thirsty for more.  But the film as whole left me feeling lukewarm, earning it a grudging recommendation.