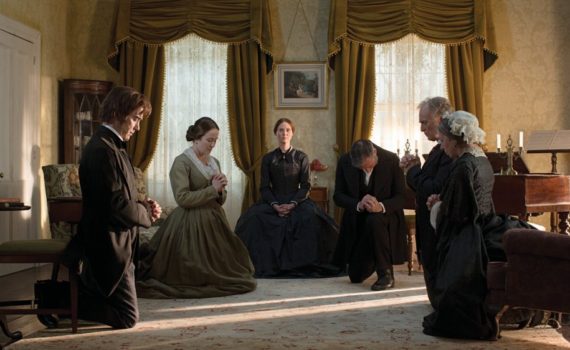 There will be Academy Award talk this year surrounding A Quiet Passion, a film in which Cynthia Nixon commands the screen and for which she very well may receive an Oscar nomination.  For an unobtrusive biographical movie about Emily Dickinson, any awards buzz will be big news, since the relative scope of the picture itself is one of much smaller scale.  This isn’t a blazing period piece full of romance and war, an epic that attracts the biggest stars and salivating audiences.  But it is a stoic, often silent, time capsule of an underappreciated life, of a woman who longed to make an impact but never saw that dream realized.  Nixon deserves the spotlight here, will receive her due attention, and may even win over enough voters to make a stab at the grand prize. Emily Dickinson, one of America’s most famous poets, but a woman who died having had no taste of fame.  Born and raised in Amherst, Massachusetts, Emily attended seminary school, but found that she had no tolerance for those who would assume that they knew the purpose and path of her soul.  During her era, Emily was somewhat of a rebel, an oddity, a young woman who would not attend church and insisted that she herself could govern her own relationship with God.  Emily’s family was very close; her mother, her father, her brother Austin, and her sister Lavinia.  They all lived together for many years, were highly educated, and often scoffed at the unthinking practices of others, those who walked through life so bereft of humor and of vision.

Emily wrote poetry and long correspondence from an early age, even writing through the darkest hours of the morning during a time she thought quiet, peaceful, and free of distraction.  But Emily’s works were never appreciated by those few who read them, as the limited number that were deemed good enough to print were heavily edited to fit the times and to represent the typical place of an unmarried woman.  Emily never encountered romance, instead persisting that her family was all that she needed.  But when her mother and then her father died, she became even more reclusive, even more atypical; wearing only white, refusing to speak face to face with visitors, rarely leaving her room, and sinking into a deep depression that would become the normal state of her life. The first, short part of the film focuses on teaching us about the dynamic of the Dickinson family; their religion, their education, their household, their bond, their comedic look at those who suffer from stuffy, backward ways.  We quickly transition to latter years, something that I was very disappointed about.  I know I said that Nixon was grand as Emily, and so she was, but I also enjoyed the younger version and wished we could have seen more of that cast perform that story.  The way in which time was sped up to bring the plot forward was very original, no issue there, I just wish we had got a bit more before we moved on.  I loved the way the family, and Emily specifically, looked at their culture, an orderly procession that they were both a part of and somehow above.  I didn’t want that phase of the film to end, and it did too quickly.

It was still bridged nicely into Nixon’s role, still held the same charm and youth, for a little while anyway, before things turned dreadfully dark.  The director can’t be blamed, Dickinson’s life became fairly bleak, but that’s the point at which I lost some interest in the movie.  You could have watched the latter half of the film at triple speed and not missed a thing, other than a few of Emily’s verses read in the background to set the current mood.  Simply, things got a little boring when the irreverence and wit were left behind to focus on Dickinson’s collapse into poor health and depression.  True story it may be, but it made for poor viewing and held no entertainment value.  I don’t mean to belittle the importance of the simple story here, or to say that all films need to have action in order for us to like them.  I just wanted a bit more of the first half of the film, a bit less of the second, and an overall more even experience.

Video – With an aspect ratio of 2.35:1 Widescreen, the video quality of this Blu-ray is neither the best nor the worst that you will stumble across.  The clarity in each scene is appreciated, and there are a few beautiful still frames to make the visuals stand out.  But there just isn’t enough movement and activity to allow the Blu-ray format to shine.

Audio – The disc is done in English 5.1 DTS-HD Master Audio, with a choice of 2.0 instead.  Subtitles are available in English and in French.  There is hardly any music during the film, apart from a little piano played as part of the story.  The silence is filled by Dickinson’s own poetry, but the quiet of the film often turns dull.  As far as the sound quality goes, for a Blu-ray disc there isn’t much to remark upon.

Extras – There are quite a few extras on the Blu-ray, specifically interesting to those who want to learn more about the artist’s actual life.  Behind the Scenes of A Quiet Passion is a 14 minute bonus coverage featurette.  Q&A with Terence Davies and Cynthia Nixon is a 23 minute sit down, on stage interview segment.  Interview with Cynthia Nixon is just that, and is 16 minutes long.  Emily Dickinson Poems, Recited is a 6 minute reading of some of her works.  And there is also a theatrical trailer for the film. Recommended.  Nixon has perhaps never been better than she is in this film, and she fits the role of Emily Dickinson to a tee.  The movie boasts excellent acting, and a stellar beginning that sets the stage for quality cinema quite nicely.  That it then begins to grow a little tiresome is to the film’s discredit, but its subtle humor at the beginning will catch your attention and may even make you into a fan for the rest of the story.  Perhaps the ebb and flow matched that of Dickinson’s real, but it made for an uneven film, one that I wanted to love throughout but just couldn’t find a way.  There is a pleasant Johdi May sighting, who I will always love for Last of the Mohicans, but Keith Carradine I could do without, thank you very much.  The video is solid, the audio fine, there are a few special features, so the technical aspects live up to their end of the bargain, even if they don’t dazzle.  Watch for some living history, watch for Dickinson’s words, watch for Nixon’s excellent performance, but don’t expect to be moved to fervent applause.