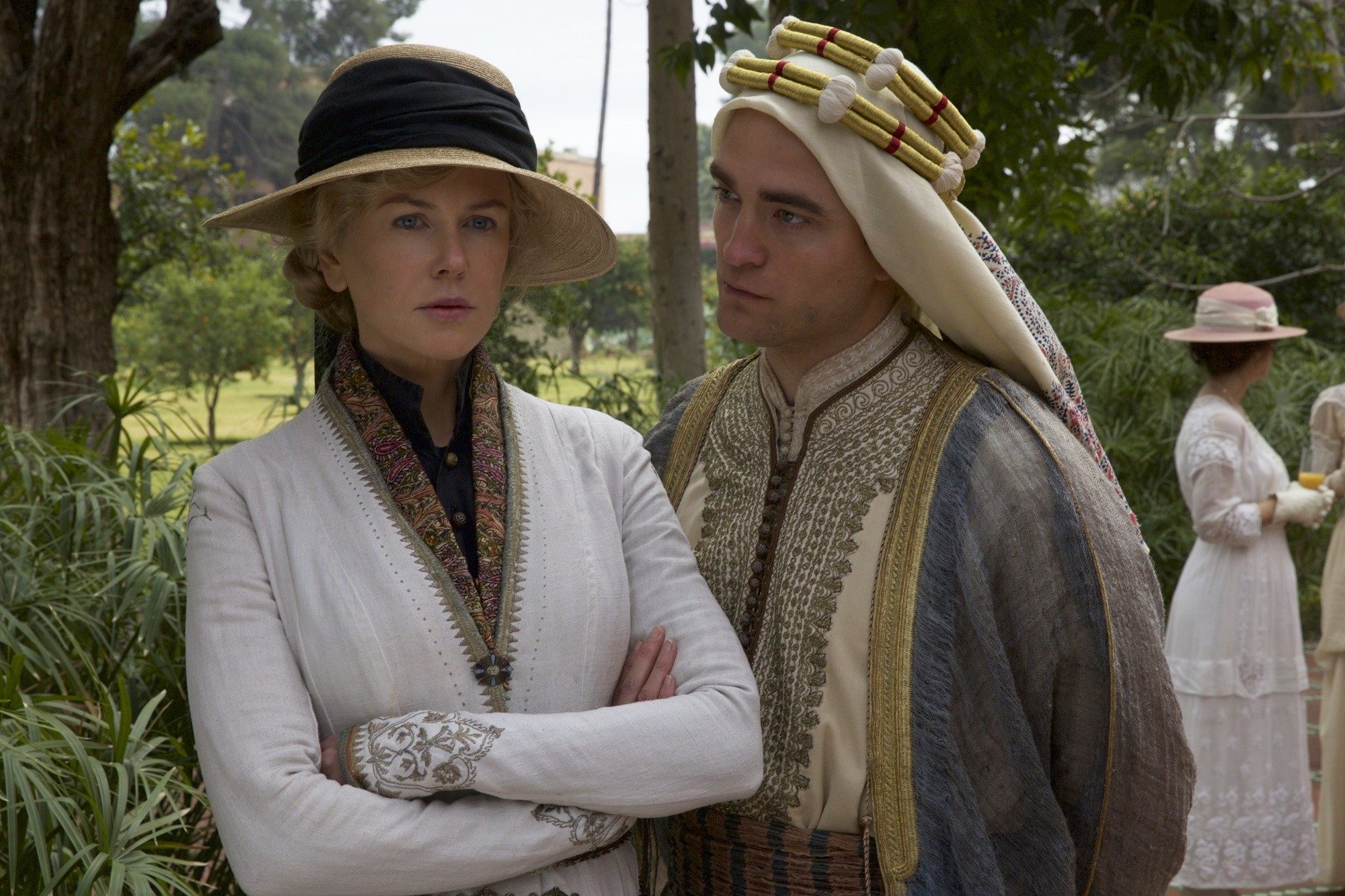 Nicole Kidman paired with Colin Farrell is a winning combination, Nicole Kidman paired with James Franco is not.  I don’t see how this wasn’t obvious before it was screen-tested and then released to a cinema near you, but someone forgot that two mature actors brought together is often a good idea, while an aging Aussie asked to fall in love with a much younger comedian, who, in a recent movie, noted that his post-sexual encounter penis smelled like guacamole, isn’t.  And I like James Franco, I think he’s funny, I enjoy his stuff with Seth Rogen, but the guy is one note, and that note needs to stay far away from Nicole Kidman’s talent and from her genre.  This movie, sappy as it is, could have worked had different choices been made.  They weren’t, it didn’t, moving on.

This is the true story of Gertrude Bell, the Queen of the Desert, the woman who would not stay behind but rather put herself in unimaginable danger time after time for the sake of science, adventure, and an unquenchable thirst for all the experiences life outside of safe existence has to offer.  Gertrude was a young, English noblewoman who studied at Oxford, who was far too intelligent to settle down to a conventional life as someone’s wife.  And so, after trying and failing to force her to become something normal, something she most definitely wasn’t, her parents allowed her to travel to Arabia to seek her purpose.  The life she would find there would define her, would captivate her, and would become the passion that consumed her very soul.

Gertrude fell in love with the beauty and the danger of the desert, with the warring Bedouin tribes who were so fierce about their territory, and with one man in particular who made her stay in a foreign land so magical.  His name was Henry Cadogan, he was also in love with Arabia, and was more than willing to show Gertrude all the sites.  Their shared obsession with regional poetry and the pure quality the very land possessed brought them together, forged their relationship, and kept Gertrude far from home for life.  Even after they were parted, she felt married to the desert, and made it her purpose to visit every forbidden locale, to speak to every sheik, to go where no man, let alone a woman, had ever gone before. First, I quickly looked up some information on Gertrude Bell, and I couldn’t find any information on Henry Cadogan, so that part may just be fictional.  She did have a love affair with an administrator in her 30s, and then a pen-pal relationship with a married men in her 40s, but that’s all that I could find on brief research.  That doesn’t matter exactly, the movie can do what it wishes with her story, but it did feel odd for a variety of reasons.  One is that Kidman isn’t a young woman any more, she’s 50, while Franco is 39, and so she was playing twenty years younger, while he was presumably playing his own age, and the whole thing was strange.  Franco almost seemed creepy, with his devotion to poetry and romantic trinkets, like he was trying to trick her, but I think we can blame that on his acting, which of course wasn’t good in such a role, a character that could not possibly have been written with him in mind.

Kidman, on the other hand, is strong enough to pull off a challenge like this, but wasn’t given the best periphery to work with.  She was asked to play young, and then to play her age, to fall in love with Franco, and then with Lewis, to travel around the desert like an explorer, to wash in an outback bath to show off her nipples apparently; her jobs were many and all over the place.  Herzog isn’t a wonderful film director, he doesn’t have the knack, and it showed here.  His star was misused, or at least unsupported, and the result was a film that felt frantic when something was happening and oppressively dull at all other times.  Robert Pattinson made a brief appearance as T.E. Lawrence, and he’s a talent that shouldn’t be overlooked, but he was the bright spot of an otherwise bland background.  Watch Kidman in her more recent films like Strangerland, Secret in Their Eyes, or better yet in her most recent alongside Farrell, The Beguiled and The Killing of a Sacred Deer.  She shines in both of her latest movies, in a way that I’ve never seen from her before, but this is a project that was better left unclaimed.

Video – With an aspect ratio of 2.40:1 and using Red Epic, Red Epic Dragon, and Red Scarlet cameras, the video quality of the Blu-ray disc is wonderful, as far as depicting the beauty of the desert and some famous landmarks.  That’s what the video was asked to do, bring this land to life in a wondrous way, and it succeeded.  The picture quality is high, crisp and clear, although the cinematography itself is forgettable. Rent It.  Nicole Kidman, who has always played cold so well, is warming up as she ages, and that’s to our benefit.  She’s a talented actress, a beautiful woman, and can very easily be an outstanding lead in a film, as she’s proving more now than she ever has before.  But Queen of the Desert was not a vehicle built to carry one great actress all alone on a bumpy ride.  There were far too many problems to overcome, and even Kidman was not up to the task of saving the movie on her own.  The pacing was poor, the story was boring, the acting around her wasn’t great, the direction was lackluster; basically the film failed to capture the magic it was attempting to harness, the result being a disappointing experience.  The video is pleasing to the eye, the audio is solid, there aren’t many extras, so the technical aspects are perhaps a mixed bag.  The film is more definitive, as I can’t imagine many audiences gushing, I predict that most will find it as much an unpolished and unnecessary product as I did.