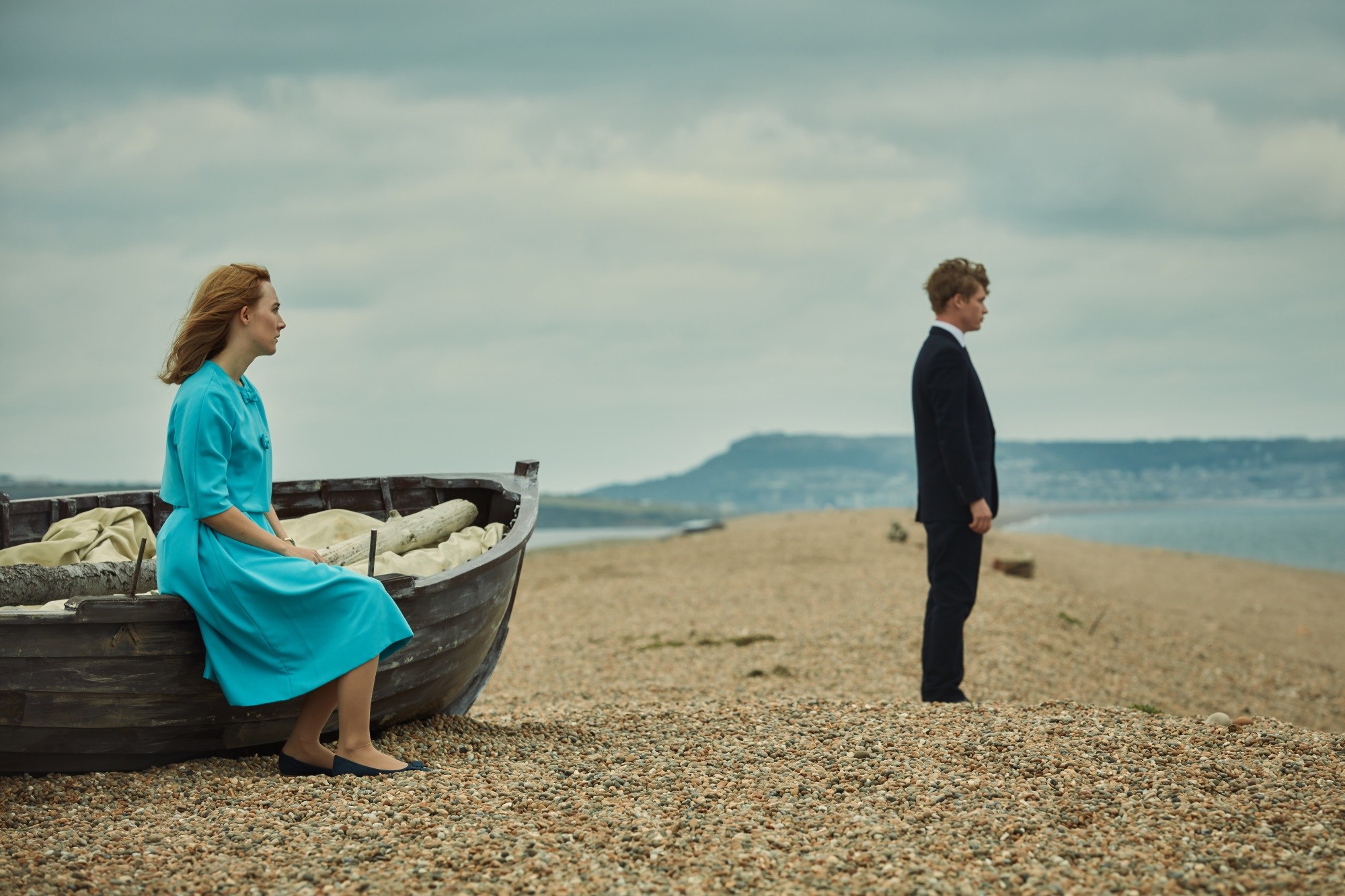 I feel like we’ve watched Saoirse (like inertia) grow up, watched her change and mature and become something truly remarkable.  She’s made herself in an elite actress, this Irish girl with the heavy accent who can quite literally do anything.  From Atonement to Lady Bird, she’s proven that no film is too challenging, and from this point on audiences need to constantly be on the lookout for movies starring this brilliant young star.  On Chesil Beach caught my attention doubly, first for starring Ronan, and second for being based on an Ian McEwan novel by the same name.  McEwan is, of course, the author of Atonement, so there’s another connection, and another reason to watch. The year is 1962, the place is England, and the occasion is a honeymoon.  Newlyweds Edward and Florence have just come to the sea, to Chesil Beach, for their wedding night, which promises to be quite the experience.  Neither young lover has ever been with another before, has ever gone further than kissing with each other, for that matter.  This is still a conservative time, when couples attend teas to meet parents, join family businesses, and wait till they are married to do anything risque.  Edward and Florence are scared out of their minds at the thought of performing sexually when they finally find themselves alone at the end of the evening, a time they both might secretly hope never comes.

They met at a rally at university when Edward randomly walked in off the street; he so tousled and unsophisticated, she so driven and confident.  Edward was in school to study history, having always loved learning and reading and time to himself, often surrounded by nature, naming birds and plants with stunning accuracy.  His father was a principle, his mother an artist, and Edward never imagined he’d win a girl like Florence to his side.  She was of a higher class, going to school for music, and was of remarkable intelligence.  Her quartet was extremely talented, and she always dreamed up becoming a world-renown group someday.  Florence never dreamed of marrying such a unpolished boy, but true love strikes hard.  Now, as they come together to fulfill their marriage vows by worshiping each other with their bodies, old memories float to the surface, accompanied by brutal and relentless fears. I am reminded of Room, both the novel and the film, for a very specific reason; otherwise this story and that don’t really have that much in common.  The similarity is the length of the book and how it is adapted into a movie.  Room should have been a short story or a novella, the content simply didn’t fill enough space to warrant a full novel.  It could have been half as long and gotten the point across better, there was simply too much that we didn’t need and so much fluff that should have been cut out.  The same applies here; On Chesil Beach the book is ridiculously formatted with giant margins so it can fill its pages, without the meat to make those pages worth their weight.  It could have and should have been shorter, much shorter, which would have made it much better.  And also, in both cases, the movie version is improved by being held to time restraints, by being edited down to what matters.

Still, the film adaptation is far from perfect.  The end insists on showing us old versions of Edward and Florence, terrible makeup and all, which is completely pointless and mood-ruining.  I didn’t mind the flashbacks to when the characters were younger, but I hated the gray hair and the wrinkles that can’t help but look fake, and were absolutely unneeded.  Also, Saoirse was not on her game, which was shocking.  Her accent was weak, her role was limited, and when not in those flashbacks she just wasn’t strong.  Billy Howle was though, he was tremendous, no matter the time period.  For someone I’m not overly familiar with, he’s now forced himself onto my radar, because there is no doubt that his talent shone.  The film has moments, there are times that work, but overall there are more negatives than positives.  Ronan just doesn’t wow, and the source material isn’t great; stick with Atonement for better of both.

Video – With an aspect ratio of 2.40:1 (1080p HD Widescreen) and shot using Arricam LT and ST cameras with Cooke S4 and Angenieux Optimo lenses, the video quality of the Blu-ray is excellent, with vivid color and crisp visuals, a delight to watch.  A lot of yellows and browns, greens and blues were used in creating this movie, which really brightened up what could have been a very heavy story.  The picture clarity is great, and the cinematography is as well, with a good eye toward English living in this period.

Audio – The disc was done in English DTS HD Master Audio 5.1, with available Descriptive Video Service.  Subtitles are available in English SDH, Spanish, and French.  Button Sounds can be turned on or off in this menu.  The audio of the film was quite excellent, with a great, classical soundtrack and a nice underlying score.  The sound was balanced nicely as well, with no problems at all, and a very consistent flow of music throughout.

Extras – There are only two special features on the Blu-ray: Deleted Scenes (7 total) and The Story Behind On Chesil Beach (9-minutes of behind the scenes footage). Recommended. This film could have been better, but perhaps the ceiling given it by the novel wouldn’t have ever allowed for much anyway.  The source material is almost incomplete, being both too short and too long at the same time, a very weak story that didn’t work as well as I’m sure it did in the mind of the author.  So the film already had something to fight against, but the time constraint may actually have been a positive, in that situation.  Unfortunately, Ronan did not deliver her best performance, and the movie will be forgotten sooner than its creators would have hoped.  Contrarily, the video and the audio were both excellent, while the special features were less exciting.  There is a real romance here, there are some beautiful moments; the final product just isn’t the spectacular drama we were hoping for.