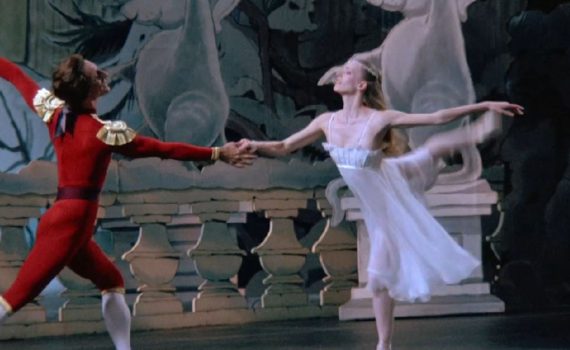 As the holiday season winds up, I wanted to visit one of my favorite traditions, The Nutcracker, a marvelous ballet whose music always gets me in the Christmas spirit.  I’ve seen it done on stage, I’ve danced around my living room to cassette tape, and I’m ready to watch the twisted Disney version when it comes out, but I’ve never experienced the classic on screen, nor have I ever seen it done quite this way before.  This 80s take is as strange as it is beautiful, an artistic interpretation that won’t fail to surprise, while also bringing to life the expected wonder of the story, a tale that never ages out of enjoyment. The plot is well known, but you’ve never seen The Nutcracker quite like this.  Clara, as narrator, welcomes us to her dreams, a world crafted in her youth by her enigmatic godfather Herr Drosselmeier, the famed toy and clock maker.  He always frightened Clara, but mystified her as well, as his manner was strange but his magic was marvelous, and the gifts he brought to the annual Christmas dance were unparalleled in their beauty.  This year was no different, as he delivers troubling dreams to Clara’s sleep but an exquisite doll house to her ballroom, shocking and awing in turn.

Clara also finds a handsome nutcracker in the Christmas tree, a gift that her godfather seems instantly jealous of.  But when her naughty brother Fritz breaks in, Drosselmeier is the first to attend to the toy, setting it aside where it might mend.  Later than evening, after the party has ended, Clara sneaks down to peek at her nutcracker, unknowingly entering a dream-like world in which she is the same size as her doll and as the mice that scamper about the floor.  After a classic battle, Clara finds herself traveling to a magic land, where she will meet a prince, fall in love, and dance the night away. What a lovely ballet, and if you’ve never seen it before please find a way to see it next Christmas; you won’t be disappointed.  It’s such a simple story usually, the climax coming near the beginning, the rest dedicated to the beauty of dance, as various flora, fauna, natural elements, and exotic peoples perform for Clara as she dreams of a life so fantastic it could never actually exist.  And the music is exquisite, of course, Tchaikovsky weaving a masterpiece that has endured the years and continues to delight audiences worldwide.  You could close your eyes and listen or close your ears and just watch; either would be a wonderful way to experience The Nutcracker.

Now, to this version, which partly sticks to the original ballet, therefore giving us exactly what we expect, and also dares to use other style elements, therefore keeping us on our toes.  It’s a trippy, wacky, slightly dark style, almost like Terry Gilliam was in charge.  There are some changes to the classic lineup, and Drosselmeier is almost scary; Maurice Sendak of Where the Wild Things Are fame was the mind behind the vision, and it’s an original one, there’s no doubt about that.  But I enjoyed the slight change of scenery, and at the same time the traditional delivery, so hats off to all involved. Video – With an aspect ratio of 1.85:1, the video quality of this film is pretty bad, but not unexpected.  It’s almost like a recording of a stage play, with some shots of people against green screens thrown in for good measure, all done in the grainy 80s.  So don’t expect too much, but also try not to be too harsh.

Audio – The disc was done in Stereo, with optional English subtitles.  The only talking is done in a small amount of narration, so really the music is the only sound.  And the music is great, is comes across the disc really well, so audiences won’t be disappointed. Recommended.  For an 80s film version of a stage ballet, this unique interpretation hits all the points in surprising fashion, and still has a few tricks up its sleeve to keep audiences interested.  It isn’t the greatest movie; in some ways it isn’t a movie at all.  But what it does right is deliver the classic music and feel in a slightly off-beat manner, sharing with us a masterpiece that we’ve seen before in a way we’ve never seen before.  The video is predictably sketchy, the audio is surprisingly nice, and there aren’t any extras, so temper your technical expectations.  All in all, this is an interesting way to view the artwork, though probably not the one I would point you toward first.