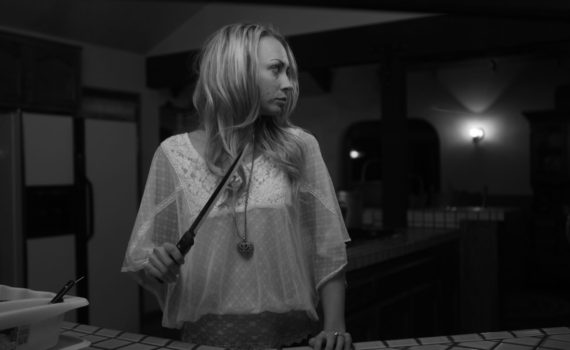 Never Open the Door plays like an hour-long Twilight Zone episode, and to anyone who has enjoyed that classic show or the variety of more-modern remakes, you know that to be a fine compliment to this film.  For only lasting 60 minutes, for being shot completely in black & white, for including only minimal characters, and for obviously being quite low budget, this movie displays a surprising amount of homage to the old style, all without completely ripping it off either.  My favorite Twilight Zone episodes were the original and the redo of the man on the airplane who could see a monster attacking the wing, though no one would believe him, starring William Shatner and John Lithgow, respectively.  Never Open the Door isn’t exactly done in that same style, it’s more vampirish than impish, but it comes with the same mood and it leaves the same impact of entertainment. Three couples come together in a cabin for the weekend, a reunion of sorts and a celebration of their friendship.  Luke and Maria are married, he a businessman/budding politician, she is lovely wife.  Isaac and Angel are engaged, but just haven’t exactly decided on the date quite yet.  Terrance and Tess aren’t really a couple, though Terrance would like them to be, and will be contended with teasing her about her job as a veterinarian and trying to make her guilty for not wanting to hook up.  At a lovely holiday dinner party, the six friends from college will share their news, present each other with quaint announcements, harass one another the way only long-time friends can, and will generally have a festive evening.

But, of course, that can’t last long, not in a movie like this, and everything will be ruined in the blink of an eye and a spray of fresh blood.  A violent knock at the door prompts some apprehension, and opening it reveals an injured stranger.  He vomits blood on Tess, collapses in the foyer, and then dies, right after uttering a warning not to open the door.  Well, more knocks are then heard outside, with voices varying from that of a little girl to that of the devil himself.  Needless to say, while Tess is upstairs cleaning up, the remaining friends keep the door closed and fret about what to do next.  They will soon find out that indoors isn’t that much safer, as Tess is undergoing some sort of demonic change, and will soon be seeking a few victims. There’s something about Never Open the Door that should please aficionados of this genre, or rather multiple somethings, starting with the general mood and moving on to the correct injection of smart details.  First of all, shooting the film in black & white was genius, and lent the entire project a classic feel.  That might sound too simple, just eliminating color, hoping that would be enough to transport us back into the past.  But never underestimate our sensory memory, just seeing a film made in this way can be enough to shift us back a few decades.  It was a nice choice, a smart way in which to work, and I applaud the director for making what seems in hindsight to be a no-brainer of a decision.

More worked as well, it wasn’t just the gray gimmick that made the film.  At only an hour, there was never time for the action to turn stale, for the audience to lose interest.  A bit of blood, a flash of boobs; enough of the genre standards were tossed in to make us feel at home.  And the actors were all invested, none of them coming across as pretty faces in a horror flick.  Rather, they seemed like a troupe that had worked together before, knew their own strengths and weaknesses, meshed as a unit.  Some of the jokes, especially early on, were a touch silly, I didn’t really become invested until about halfway through, and no one will be calling this movie the original work of the century.  But there’s enough here to latch onto, to enjoy, especially if you take it with a grain of salt. Video – With an aspect ratio of 1.78:1 and shot all in black & white, the video quality of Never Open the Door is about as high as a creepy classic transferred to a DVD, which isn’t really a problem, instead just adding to the nostalgia of the style.  For a low-budget horror flick, I’ve seen worse picture quality.

Audio – There are no audio options, choices, or details available on the disc.  The sound quality is unremarkable, but does rely on some tense, dated music to set the tone of the evening, something that can be noted in the film’s favor.

Extras – The special features are where any technical aspects of the movie will be noticed.  The first extra is a trailer for the film.  Also, there are three interview segments: a conversation with actress Jessica Sonneborn, a conversation with director Vito Trabucco, and a conversation with producer Christopher Maltauro.  Lastly, there is a photo gallery accompaniment and a 6-mintute tribute featurette dedicated to Maggie, a makeup artist who died shortly after the film was completed. Recommended.  This is definitely a film for those who already love the genre, the style, the originals, the late-night horror flicks that scared you as a child when you were up watching something you shouldn’t have been.  But there is quality here that’s actually a little surprising, a strong enough nod but with a touch of clever film-making that saves it from becoming something completely recycled.  I actually really enjoyed actor Mike Wood as Luke; he reminded me of a young, funny, awkward, semi-evil version of Wallace Shawn, with a thick-lipped grin that was at once lovable and loathsome.  Anyway, the movie is an hour long, people die in ways that make only a little sense, but everything is in the name of fun, so it’s easy to forgive and hard to fault.  The video is OK, the audio is fine, there are a few extras, but don’t look to this film for any mind-blowing technical details.  Come for a good throwback and stay for a few gross outs, just don’t expect much else.