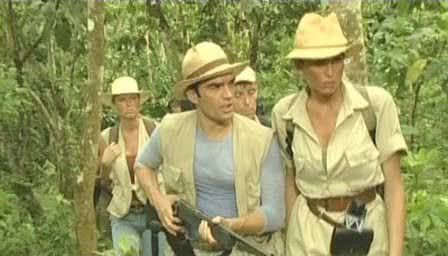 Some movies are so awful that they cease to be movies.  They become something much different and much worse, something less than film and more than Charades.  Mondo Cannibal or Cannibal World or Mondo Cannibale, whatever you want to call it, is such a movie.  It floats around in a gray area between cinema and home video that houses some of the worst ideas of the last hundred years.  Bruno Mattei, AKA Vincent Dawn, is a master of this type of failure, specializing in late-night smut that only very rarely comes across as mildly funny and not totally worthless.  His filmography is a laundry list of Italian crappola, story after story of zombies, cannibals, and monster sharks that tear humans limb from limb in a shower of red paint.  Mondo Cannibal is no different, a movie that’s not a movie, a pointless waste of time that fails to excite, illicit, or impress in any way. In the world of American TV news, ratings are king.  The monthly points reports decide which shows stay and which go, whose careers are advanced and whose are destroyed.  There’s no gray area; money talks and the only way to make money is to keep audiences and sponsors happy.  For once-popular news anchor Grace Forsyte, this is bad news.  Her program is losing popularity, after once being the paradigm of journalism.  She & her team could keep audiences glued for hours with their sensationalist reports, stories of horror & danger that you couldn’t pull yourself away from.  But that was before, this is now, and Grace has fallen from, well, grace.  She needs a boost, a new project, a return to the old style, something to spark her career and get the viewers that once loved her back in their easy chairs.

So, who does she turn to but her old pal Bob Manson.  Bob was once part of the team, a valuable asset in the world of smutty journalism.  He would stop at nothing for a story, break any rule, ignore any moral, do whatever it took.  But the guy has turned soft, wanting to save the Amazon rainforest or some such nonsense, no longer caring about the highest rating & the most money.  This change in attitude won’t stop Grace, as she is determined to get the old team back together, hike into the jungles, and find something that supposedly doesn’t exist; a native cannibal tribe.  If she could get some blood & gore back on TV, her job would be secure, sponsors would line up at the door, and her career would be back on track.  All she has to do is convince Bob, gather the troops, set off on a dangerous mission, disrupt the native culture, and kill some cannibals.  All in a day’s work, right? I’ve seen some bad late-night comedies and b-movies, stories that barely make sense and are basically a vehicle for cheap humor, unrealistic violence, and a couple boobs.  I respect the genre for what it is; a complete break from normal cinema, a ridiculous & absurd spoof on the seriousness of Hollywood.  I can enjoy those movies for what they are and watch them knowing that they need to be judged a little different than regular movies.  But I’ll say it again; Mondo Cannibal isn’t really a movie.  It’s a sad attempt at …something …by a group of …someones…that never feels like a coherent collection of ideas brought together for one purpose.  It’s more an outdoor drama performed by idiots than an actual film, as it has no elements of story, depth, or purpose, and never feels like anything other than crap.

I’ll try to clarify, because I don’t want you to watch this movie in an attempt to understand why this movie isn’t a movie after all.  Hopefully I can save you the misery and the wasted time, though it’s hard to describe the complete failure that is this project.  There’s zero humor; not a hint of pun or satire or gag, nothing at all.  There’s no sex appeal; a couple of women are seen topless, but not in a way that I would imagine anyone found arousing.  There’s no point; the story exists only to showcase people eating people for the sake of some twisted gross-out factor.  And even that is done poorly, with fake blood & over-the-top gore that’s about as believable as it is enjoyable to watch.  The acting is bad, the editing is bad, the direction is bad, the plot is dumb, and oh yeah, it’s dubbed from Italian to English, which may actually be the funniest part of the whole film. Video – With an aspect ratio of 1.33:1/4:3 Full Frame, the video is just about as bad as you’d imagine it to be.  Released straight to video in 2004, there’s not much of a budget or an attempt to make this a visually appealing film.  It’s not horribly grainy, but there’s nothing impressive about the picture quality, as it looks much older than it actually is.

Audio – The DVD was done in Dolby Digital Stereo.  There are no audio options or language selections.  The sound quality was poor, with no effort made to make it stand out, and a general lack of good balance or clarity.

Extras – The only extra on the disc is a trailer for the film. Skip It.  Mondo Cannibal was based on Cannibal Holocaust, another Italian cannibal spoof made in 1980.  Perhaps the original is much better, or perhaps it at least feels relevant to its time period & genre.  And perhaps this one was trying to copy that one, have the same feel, I don’t know.  It doesn’t really matter; this was a horrible, horrible movie that shouldn’t be watched by anyone that I can think of.  The video was poor, the audio was bad, there’s only one extra, and I see no reason that this film was ever made.