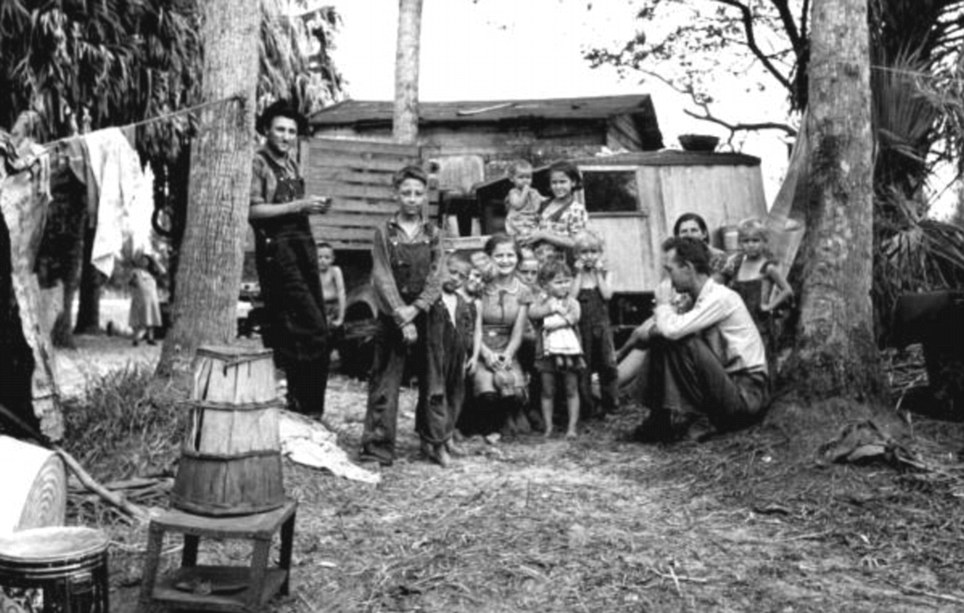 The Migrants is a film that has almost completed its slide away from our memories, becoming something of the past that very few remember and even the internet can’t firmly hold captive in time.  Made for television in 1974, this movie is an adaptation of a Tennessee Williams story, living in that on-stage feeling that Williams perfected, but also bringing a Steinbeck air to the screen with its focus on the traveling worker and his family’s plight.  Not much remains of The Migrants except a barely-seen IMDb page, perhaps one or two images on an internet search, and apparently a DVD release more than 40 years after its production.  Still, it’s nice to stumble across both a random 70s flick that almost no one has seen and also a tale of the working family living through unthinkable conditions as they try to hold on to their personal sliver of the American Dream. The life of a migrant farm worker is one of toil and precious little else.  Following a caravan of cars across the country as the seasons change, they move from field to field, picking whatever is in bloom, handed pennies for their labor, and watching their children grow up to join the bow-backed throng.  A manager takes the fee from the farmer, dolling out each family’s share based on what they picked that day, buying them supplies from in town and keeping a book on what is owed.  More indentured servitude than manual labor, the family has few options, no permanent address, no money for healthcare, and doesn’t dare strike out on their own.  They know how others view them, as destitute gypsies traversing a dusty landscape with only the clothes on their backs to call their own.

The Barlow family leads a life of misery and travel that is hard to watch.  Mr. Barlow works the rows and tries his best to take care of his family, even while bringing each member into the field with him as soon as they are old enough to pick.  Mrs. Barlow has birthed many children, just to watch each one resign themselves to a life on the road.  Wanda and the little girls work right alongside the men, Wanda taking only a few days off to have a child of her own.  But Lyle, the son on the verge of becoming a man, wants more for himself, demands to be treated as a dedicated worker, and can’t wait for his chance to escape the bleak existence of the migrant worker, one whose only promise is to be short. It’s rough knowing while watching this film that this life is not just a thing of the past to be pitied, but also one of modern times as well, a practice that has adapted to the future but hasn’t disappeared or become a lighter burden.  These families with their entire households packed onto a truck, moving from shack to shack, working with blistered hands each day, never resting until the day they die; it’s quite the tale to be reminded of and to face, even in a fictional nature such as this.  Give Williams and Gries credit for presenting us with a look at something we’d rather ignore when we buy our strawberries from the grocery store, at a piece of American history that hasn’t quite dissipated.

As far as the movie is concerned, there’s a reason it was made-for-TV and has since been almost completely forgotten, though that’s not to say there aren’t a few positives to latch on to.  It’s definitely quite theatrical, with an on-stage feel that would probably be more appreciated in that venue than in this media.  The dialogue is pretty stilted and silly, but again, it comes across as a play rather than a film, which allows you to forgive a little.  The acting didn’t need forgiving, it was rather solid, Howard, Leachman, and Spacek delivering quality 70s performances.  Still, this isn’t something you need to go out of your way to watch, it’s just a reminder of dated experimental cinema and of a darker part of Americana that we ought not forget. Video – With an aspect ratio of 1.33:1, you know what to expect from a DVD version of a 70s television special, so you won’t be surprised that the visuals are not amazing.  There was at least some care given to how the film was presented, some effort put into staging and delivery, just don’t count on high quality video.

Audio – The disc was done in Dolby Audio, but no other sound/language/subtitle/production information is available.

Extras – The only special features are three trailers: Inherit the Wind, Lilies in the Field, I Want to Live. Recommended.  I would be curious to know how many Baby Boomers out there remember and watched this film, because looking at it right now there doesn’t seem to be much memory of it left all these years later.  I would also wonder how it was received back then, was in an indie/art house picture, did it strike a cord with audiences who felt sorry for those destined for this life.  Whether during the Great Depression, the 70s, or right now, the story of the migrant worker is an important one, and I’m glad a film like this still exists to tell it.  It isn’t an amazing movie on its own, but it can still be appreciated for its message.  The video is poor, as is the audio, and there aren’t extras to speak of, so look elsewhere for technical marvels.  But enjoy this slice of history on its own merit and its flaws should be forgivable.