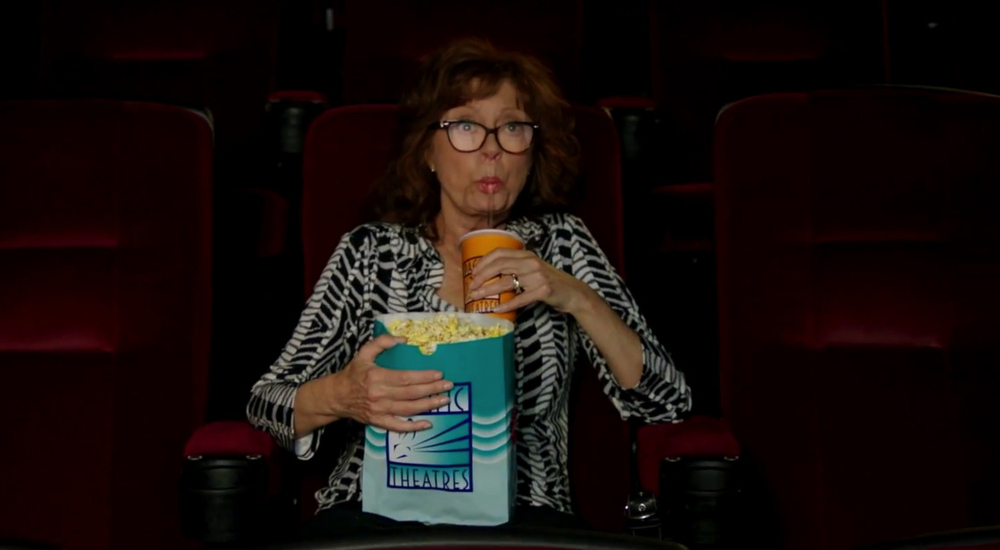 In the vein of I’ll See You in My Dreams and Hello, My Name is Doris, The Meddler is another take on what it might be like to be a lonely female baby boomer searching for a new live after the death of a loved one, trying to maneuver a new era, connecting with younger people in awkward ways, trying pot because, why not.  There’s definitely a strange genre starting here, or perhaps there always has been, I was just too young to notice it.  But as this generation of actresses age, they easily slide into this type of film, and can also fairly easily convince us that what they’re portraying is something that is powerfully real.  Blythe Danner and Sally Field pulled the character off quite well, added a dash of humor, brought us into the hearts of these aging ladies.  Susan Sarandon does nearly as good a job, though she wasn’t really aided by those around her, resulting in a solid attempt at this category but perhaps not its shining moment. Native New Yorker Marnie has moved out west to Los Angeles, a place very unlike her old home.  Her daughter, Lori, headed to Hollywood to become a screenwriter for television pilots, and Marnie followed her there.  Having recently lost her husband, she feels out of place in a world that was defined by her relationship to that wonderful, Italian, New Jersey, hard-working, father/husband who loved his family so much.  He also set them up for financial freedom, allowing Marnie to live where she wants, buy what she wants, and give what she wants.  The only problem is, she’s not really sure what it is she ought to be doing with her time, so she mostly she just visits Lori, transitioning to calls and texts after she discovers the glory of iPhones.

A meddling mother isn’t exactly what Lori needs right now though, not while grieving over the loss of her father and attempting to move on past a messy breakup from an actor named Jacob.  What she needs is space, which is the complete opposite of what Marnie wants to give.  So, Marnie switches her affectionate and high-energy attention to anyone in L.A. who will appreciate it; the guy at the Apple genius bar, the friend of her daughter’s who needs a babysitter, old ladies at the hospital who seem lonely.  Marnie has a lot to give, but channeling that into product ways is not always easy.  And meeting a hunky ex-cop called Zipper will only complicate matters further, proving that it’s not easy to be a red-head on the go in the big city, even if 60 isn’t exactly the new 30. There must be some substantial market for these films, probably including my mom, your mom, all the aging moms, women who want to be able to fantasize that they might start again, become hip, learn lessons, meet silver foxes, reconnect with their daughters, make friends where they never thought they could, enjoy big city life, all the stuff they never did before but don’t want to imagine that they will never get the chance to.  It’s genius really, as long as that subgroup of audience members buy tickets and DVDs anyway.  And it’s not all fluff, there is substance here, especially in some of the others of this genre that I mentioned before.  There is a place for this kind of film, and The Meddler is another strong shot at relaying this kind of story.

Susan Sarandon does a commendable job as Marnie, a woman who means so very well but sometimes comes across so very wacky.  Her accent was adorable, as were her phone conversations and long messages, her new-found love of technology reminding us all of our parents and their inability at times to figure out which button to press.  Perhaps the plot could be seen as ageist, but I think the filmmakers’ hearts were in the right place.  That’s the strongest compliment I can give this film, I think; it was trying to say something important in an honest and emotional way.  If it didn’t always succeed, some of that failure can be laid at the feet of the supporting cast.  Byrne was weird as Lori, and Simmons as Zipper was unusually one-note.  Too many of the others were straight from SNL or were at least of that quality: Cecily Strong, Jerrod Carmichael, Jason Ritter, Sarah Baker, Casey Wilson, Randall Park.  There was a goofiness here that I didn’t see in the others, films that did a better job, so be prepared for that, but also don’t shy away from this style in general; there are more positives than negatives. Video -With an aspect ratio of 2.39:1 Anamorphic Widescreen, the video quality of The Meddler is quite good, without becoming a stellar technical feature that you’ll be raving about the next day.  The use of color in the film is especially well thought out; a vibrant palette on display throughout the film, really highlighting Marnie’s bright personality.

Audio – There are many sound options on this DVD.  Audio can be played in English, English Audio Descriptive Service, French, Portuguese, or Thai.  Subtitles can be selected in English, English SDH, Chinese Traditional, French, Korean, Portuguese, Spanish, or Thai.  The sound quality is fine, with a fun mix of Beyonce songs as part of the plot, just to spice things up a bit.

Extras – There are quite a few special features on the disc.  Commentary with Susan Sarandon and Lorene Scafaria can be accessed from this menu.  A 4-minute Gag Reel is available for your entertainment.  The Real Marnie is a 12-minute sit-down interview with the director and her mother.  The Making of The Meddler is a 16-minute behind-the-scenes segment.  And there are four previews on the DVD: The Bronze, Guernica, Hello My Name is Doris, Equity. Recommended.  I don’t know if it counts as a new genre, and I’m sure other mature actresses have done films like this from time to time, but it sure feels like there’s a movement toward this type of movie in the last few years, with mixed results.  The Meddler is a good example or that, of what can go right and wrong when you try to produce a dramody about a older lady and her coming-of-age, so to speak.  There is real heart here, mixed with some smart humor, as all the moments that touch on the filmmaker’s real life work very well.  But it’s the periphery that lets this film down and keeps it from being something special.  The video is fine, the audio OK as well, the extras there if you want them, but the technical aspects of this film aren’t going to jump off the screen at you.  In the end, it’s a nice movie, something you can watch with your mom, and something that deserves a quick nod, if not a standing ovation.