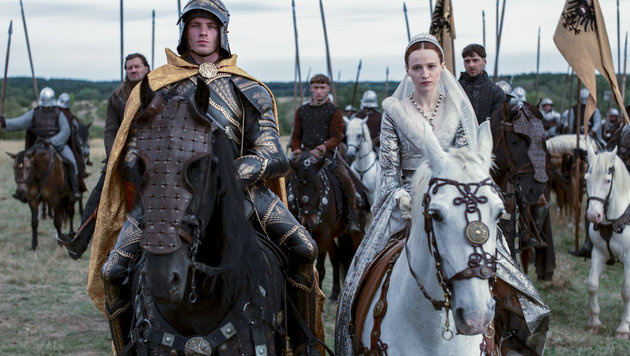 Like Rome or The Tudors before it, Maximilian attempts to bring history in bite-sized chunks to audiences who have become used to series television, especially the more racy kind that can be found on HBO and Showtime. This is what we want now; short-run shows that push the boundaries, tell us sordid tales, and leave us wanting more. Sometimes it turns into Emmy-caliber entertainment, sometimes we’re happy just watching a handful of episodes and then forgetting all about it, but American audiences in particular have shown a specific interest in binge watching; if we can swallow down a bit of education in the mix, all the better.  Anyway, this Austrian series, which ran in 3 long episodes and is brought to us in 6 smaller segments, is exactly what we’re looking for; blood, sex, a dash of true story, and a whole lot of entertainment value that we don’t have to work hard to consume. The Duke is dead; long live the Duchess. In 1477, at the end of the Middle Ages, the wealthiest nation in Europe is Burgundy, technically a duchy of France but fiercely led by Charles the Bold, a man who bows to no one. When Charles dies in battle, the throne is up for grabs, since he left no male heir. His daughter, Mary of Burgundy, claims the title herself, but without a man to stand beside her that claim holds no power. The King of France, Louis XI, proclaims that his underaged son must marry Mary, therefore bringing the duchy back under his control. The new Duchess wants nothing that France has to offer, but money can only buy so many mercenaries, she needs a warrior to lead her armies into battle, and that’s where Maximilian comes in.

In Austria, the impoverished Holy Roman Empire has lost its former glory over the centuries since Rome’s collapse, but Emperor Frederick still reigns, if mostly only in name. His son, Maximilian, is a brilliant solider and handsome lad; he would make the perfect suitor for Mary of Burgundy. With Mary’s money and Maximilian’s claim to the god-given title of Holy Roman Emperor, a true dynasty could be established, one to bring the entire continent out of the brutality of the old ways and into the light of modernity. But first Maximilian will have to survive marauding Hungarians, the plague, and the assassins of the French King, if he is to reach Mary’s side and take her for his wife, turning the page of history with one dramatic sweep. This series, which watches as a five-hour movie, is exactly the style that American audiences are enjoying right now; I’m surprised that it isn’t more widely known. Perhaps it simply wasn’t released here; it’s entirely European and makes no attempt to be “Hollywood”. You can tell because it doesn’t have a random, American explorer or some other ridiculous write in to appease us, which I’m very happy to report. No, this is Austrian television, coming at you in German, French, Dutch; whatever language the historical figures would have spoken when they were alive. In that way, I think this series does a tremendous job, but also might lose a few viewers who don’t want to spend the entire time watching subtitles from multiple languages, until their heads are spinning with accents, dialects, official names, and ancient map references. But that all sounds good to be, as a history and a movie buff, so judge for yourself.

I was concerned at the beginning, because the first few episodes are full of court appearances and blustery discourses. I didn’t know how many more times I could watch Maximilian be summoned to his father’s throne room to get a lecture, and then switch to a different country to see the same thing from a different royal family. But thankfully that only lasted long enough to set events in motion; then the more dramatic elements began to pick up steam. This is a love story at its core; Mary and Maximilian were said to have a true romance, and their relationship set the stage for the Renaissance in later years. We see that love, some appropriate nudity, a side story or two, a touch of combat and battle; all the makings of an epic, European, Medieval melodrama, and almost always in the best ways. What more could you ask for from a limited series; I really think that if more people got their hands on this tale it could break out in a big way. Video – With an aspect ratio of 1.78:1 (1920x1080p), the video quality of the Blu-ray disc is excellent, everything you could hope for from a period piece of this nature delivered in a format that raises the ceiling. The cinematography was lovely, as were the sets and the costumes, a real transformative piece of cinema. The color tended toward dark, but that shouldn’t be surprising, given the era, and otherwise the picture was very nice.

Audio – The disc was done in German and French DTS HD Master Audio 5.1 or 2.0. Subtitles are available in English. The audio quality is great as well, with a stirring soundtrack that helps move events along and will be stuck with you long after you stop watching. The balance and sound mixing were done very nicely, no problems from the audio in any way, and the score only added to my enjoyment.

Extras – There is only one bonus feature available; a trailer for the film. Highly Recommended. I can recommend this feature because I enjoyed it so much, but I have to acknowledge that others might not feel as strongly about it as I do. I love history, especially European and Medieval, so this story was right up my alley. Also, incidentally, I love accents, attempting to place them, and following along with foreign languages as I try to pick out words I understand, especially with the help of subtitles. And I’m a film critic, so really this movie just fell into my lap. I would hope that others would be entertained by it too, because it’s in the current style and format, I only question audiences’ ability to stick with it when it takes a little work to follow through the course of history. But the acting is great, the action is intense, it always feels real, and I could have watched more; it only got better and better after a bit of a slow start. The video is very attractive, the audio is strong, there aren’t many extras, so the technical aspects are mostly positive, and definitely won’t distract. Given a solid chance, this series could impress you; it did me.