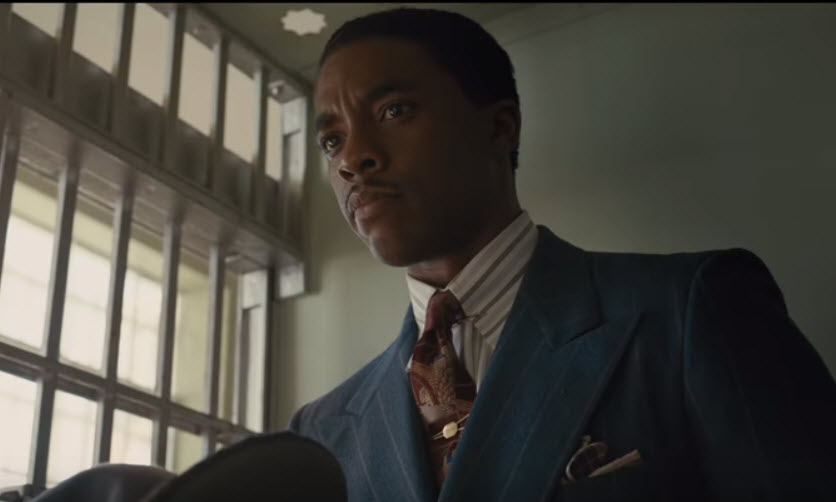 Director Reginald Hudlin hasn’t attempted a feature film since a string of odd choices in the 90s and early 2000s.  House Party, Boomerang, The Great White Hype, The Ladies Man, Serving Sarah; that’s an odd group, to say the least, and the array of television episodes that he’s directed since then are even odder, and would take much longer to type out.  My point is, he’s been out of the game for a while, and even when he was in the game he wasn’t exactly winning.  And so his most recent movie, Marshall, feels more like a TV special than it does an awards-caliber film.  But that isn’t a completely terrible thing, if you’re prepared for what you’re about to watch; a true story that would probably fit better on the History Channel than in a theatre near you. Thurgood Marshall, a lawyer working for the NAACP, was known as a man who stood tall and stayed clearheaded in the most trying of situations.  His job was to travel the country to important spots where the battle for equal rights was being fought the hardest, to be the voice for those were being shouted down.  When an innocent black man was accused of a terrible crime because the system had been rigged against him for centuries, Marshall would arrive to give legal counsel, to defend the case, to coach other lawyers, to show the nation that men are created equal, and that their legal rights should be treated the exact same way.

In one of his most famous cases, Marshall came to Connecticut to defend a black driver who was accused of raping his white employer.  Joseph Spell worked for the Strubings, and was always kind to the Mrs., especially when her husband was away on business.  But one night, Eleanor Strubing went to the police claiming that she was raped and thrown over a bridge to be drowned, and that Spell was the culprit.  The story was fishy and Spell refused to plead guilty to a crime he said he did not commit, so Marshall arrived to find the truth and to get this man a fair trial.  Because he was from out of state, he was not allowed to speak in the courtroom, relying instead on local attorney Sam Friedman, and insurance lawyer who was about to get the education of a lifetime. For a film titled after the famous true character, Marshall had very little to do with Thurgood and more to do with Friedman, a turn I did not expect.  They tried to throw in a little backstory, Thurgood’s wife and their struggle to have children, but the focus remained on Friedman throughout, especially in the courtroom, where he was the one who was historically allowed to speak, so that makes absolute sense; I was simply surprised that the film tilted his way so much.  We even got a lot of Dan Stevens, which I was fine with; he’s one hell of an actor, and you hardly miss his dashing British accent.  Regardless of the characters, the case ended up taking center stage, and that’s as it should be, with the verdict an important step toward equal treatment under the law.

Dan Stevens was strong, Sterling K. Brown is a revelation, James Cromwell was the perfect judge, but it’s hard to take Kate Hudson seriously; she just isn’t talented enough to hold her own opposite these other players.  Chadwick Boseman is though, and his rise to stardom is an important one.  He does a lot of biopics, he’s also Black Panther, he seems to have a solid path carved out already; I’m ready to watch him become something special.  Now, Josh Gad is a bit of a mixed bag, a funny man who is trying to play serious, a little bumbler who wants to put up a fight.  I don’t think he quite has the chops, but he does fine when he’s in the spotlight, just not impressing as much as the opportunity allowed.  The film is intriguing, it does show more like television and less like a film, it won’t win any awards, but the story is important enough to pass along, the delivery good enough to warrant a light recommendation. Video – With an aspect ratio of 2.00:1 (1080p HD Widescreen) and shot using an ARRI ALEXA 65 camera with Prime 65 and Vintage 765 lenses, the video quality of this Blu-ray disc is excellent, perhaps even unnecessarily so.  The clarity is great, the color is vibrant; it’s almost lost on this movie, which required nothing more than that we heard the tale and understood the meaning.

Audio – The disc was done in English DTS-HD Master Audio 5.1, with an option of Descriptive Video Service in Dolby Digital 2.0.  Subtitles are also available, in English SDH and Spanish.  In the sounds menu, button sounds can be turned off or on.  The audio quality of the Blu-ray disc is great, a solid compliment to the action of the story and the setting in which it takes place.

Extras – The only extras are 8 trailers for contemporary films.

Recommended.  Thurgood Marshall would of course go on to be the first African-American Supreme Court Justice, but I didn’t know much about his road there, and I feel thankful now that I have had the opportunity to learn.  Most of us have the means to jump on a computer, our phones, or Wikipedia to find out any information we want, to educate ourselves about any historical figure we could imagine.  But sometimes it takes a film or a book or a play to nudge us in the right direction, to get us motivated to open up our ears and our minds.  The video of the movie is top-notch, the audio is strong, the extras are few; technically there won’t be any distractions.  So while Marshall may not be the courtroom drama of the century, it has a lot to offer, if we are simply willing to hold out our hands.