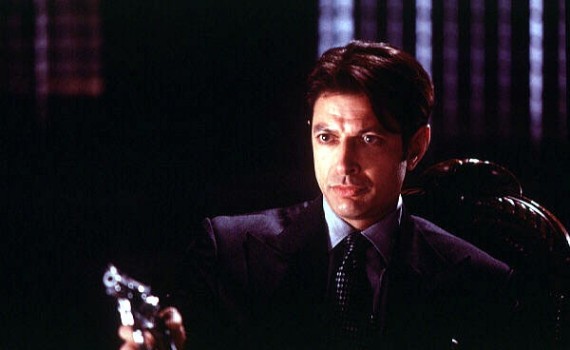 Some films can only be appreciated many years after their time.  For The Singing Detective, a low-rated musical/crime/dramedy starring Robert Downey Jr. and a whole slew of stars, that time came 12 years after release.  For being so disliked, it’s a film that I would challenge critics to watch now, try to understand having taken a step back, see it for the purposeful insanity it is.  And for Mad Dog Time, that moment of glory has come 19 years down the road.  I dare audiences to watch this oddball film with its farcical nature and team of talent without coming away impressed.  It bombed in its day, sure, was too strange to be taken seriously, didn’t live up to the cast it advertised.  But seen decades later when these stars have faded, when some of them have died, when we’ve had a chance to prepare ourselves for how completely unusual this film will be, it has the potential to became a delayed cult classic and a movie you won’t quickly forget. This is Vic’s town, Vic’s show, and Vic’s game to play.  This venerated crime boss is the undisputed leader of the underworld and the nightlife, the heartbeat of the city, and the coolest cat in the spots where it all goes down.  Vic is in love with Grace, it’s his one weakness, and he’d do anything for her.  His right hand man, Mick, is seeing Grace’s sister Rita, the pair lighting up the room with their love.  But idyllic situations have a habit of turning sour, and this one is no exception.  Vic becomes a little unbalanced, even having to be committed to an institution for a time.  While he’s gone, Grace has her own meltdown, turning to Mick for comfort & companionship.  So now Mick is in trouble.  Vic wants him dead for sleeping with his girl, Rita is angrier than a hornet, and, uh oh, Grace is pregnant.

With everything that’s going on, a new group of thugs move in on the territory, led by the crafty Jake Parker.  They think they can pit all the emotional players against themselves and claim the turf that’s left free after everyone kills everyone else, but that’s not exactly how it’s going to go down.  Yes Vic wants Mick dead for touching Grace, but Vic needs Mick to deal with Jake, all to the chagrin of Ben, who wants to the #2 himself.  Still, Vic hires Nick to kill Mick once Mick has killed Jake, with Ben in the wings getting antsy.  Oh yeah, and then there’s Rita with her own plans, Grace with her unborn child, and Vic returning to town after his stay in the loony bin.  He thought the insanity in their was bad, wait till he sees what his new life outside is like. Vic, Mick, Nick; it’s absurd of course, but the film makes fun of itself in a way that says it’s in on the joke instead of the butt.  It’s an over-the-top film noir that pays homage to dark gangster flicks without becoming too dated or boring.  It’s really an undefined time & place, without cops & civilians to muddle things up, leaving the film free to go wild, kill a hundred punks, and keep on rolling.  It’s an insane show of gunfire, sit-down duels, crooner standards, half-dressed dames, nicknamed numskulls, and anti-heroes galore.  But what saves it from obscurity is its perfect balance of humor and death.  There’s comedy, and it’s farcical, but the movie holds itself back from becoming a silly mockery, standing proud as a misunderstood nod to the genre that takes every standard aspect one step further, all in the name of our amusement.

I can’t believe Mad Dog Time isn’t a cult classic.  It must have seemed so terrible when it first came out, but now that we’re removed from the moment, it could begin to shine as one of the strangest oddball comedies of the past twenty years.  Just look at this cast, a group of actors & celebrities than have no business sharing the stage.  Jeff Goldblum as a sex symbol, Richard Dreyfuss as Dr. Leo Marvin the mob boss, Gabriel Bryne with one of most memorable death scenes you will ever see, Ellen Barkin back in the day, Diane Lane in an early role, Burt Reynolds for some reason, Larry Bishop the director being a hit man, Joey Bishop the director’s dad, Kyle MacLachlan, Angie Everhart, Gregory Hines, Billy Idol, Paul Anka, Richard Pryor, Rob Reiner; with every new face that pops up you ask yourself, “is this for real?!”  And the answer is yes, it’s for real.  It’s really weird, really obscure, never really caught on, but man what a cult hit it could be if enough people ever saw it. Video – With an aspect ratio of 1.85:1 and shot using Panavision cameras and lenses, the video quality of this Blu-ray disc is nothing to applaud.  It’s a transfer from 90s quality picture, with the grainy cloudiness that we who remember VHS tapes have come to recognize.  On a widescreen TV, on a Blu-ray disc, the picture is enhanced a small amount, but won’t impress with its clarity or brilliant color.

Audio – There are no audio options on the disc, no subtitles and no language choices.  The DTS audio is fine, but offers nothing in the realm of sound achievement.  The music selection is nice, and I didn’t notice any warbled audio, so that’s to the film’s credit.

Extras – There is only one extra on the Blu-ray; a trailer for the feature. Recommended.  Mad Dog Time was also titled Trigger Happy, an appropriate name for a movie that shoots first and asks questions later.  Don’t watch expecting L.A. Confidential, but rather the antithesis of that film.  What we have here is failure to appreciate; audiences weren’t interested in the 90s, no one picked this up as a movie that got better with age, and Mad Dog Time itself refuses to acknowledge that it’s lost its mind and made a sham of the genre.  It’s time to remedy our lack of interest in this film.  Is it great?  Don’t be silly.  But it is fun, and that’s something.  The video is only OK, the audio fine, there is only one extra, and an ancient VHS copy would serve you just as well as this Blu-ray does, at least as long as the tape holds out.  This kooky cast alone is a reason to check out this movie, ignoring the positives (inherent entertainment) and the negatives (90 minutes of matchless mayhem) of a film that can’t be duplicated.