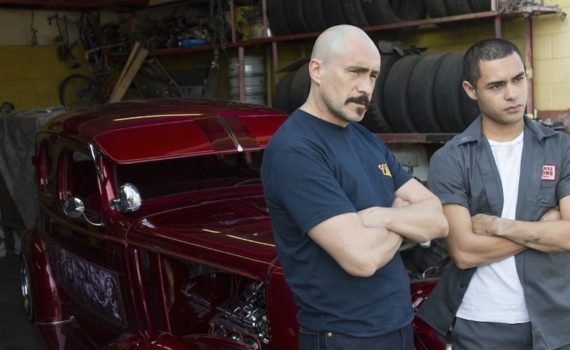 A Peruvian director, Montreuil attempts to capture Mexican-American tradition with his drama Lowriders, a film about art, family, and the bonds that never break.  Montreuil is a relative amateur, with two features and two shorts under his belt, but no major projects for approaching ten years.  He steps in and attempts to wrestle a heavy theme, a vibrant culture, and a few name actors, hoping that the final product will be a movie that will surprise audiences with its depth.  But Lowriders isn’t fresh at all, isn’t well-acted in any scene, and won’t catch the attention of those looking for a diamond in the rough.

Danny Alvarez grew up in the urban jungle of L.A., not a child of the streets, but a kid who felt that the city was his for the taking, that the walls were canvases, not barriers.  Danny is an artist, his medium is graffiti, and not everyone appreciates his love for painting where you are decidedly not supposed to paint.  His father wants him to follow in the family footsteps, to work alongside him in the garage fixing cars, sure, but to also create art of a different kind.  His father is a builder of lowriders, a Mexican-American tradition since their heritage was threatened in this new place that their grandparents called home.

So Danny paints in the night while his father prepares the family’s classic car for a lowrider competition.  But there’s an extra piece to the puzzle that’s about to make its volatile presence known.  Francisco Alvarez, known to all as ‘Ghost’, just got out of prison and is coming home to see his family.  Danny’s brother has been away for years, his father disowned him, and the icing on the cake will be when Ghost joins a rival car club that means to win the competition trophy for itself.  The drama will come to a head, this family will need to heal, and Danny has to decide what kind of man he wants to become.

Montreuil tries to do some damage with a heavy punch of emotion in this film, but all he actually manages is a scrape on the face of a theme that has seen better directors, better actors, and better versions.  His attempt to capture family drama feels forced, and we’ve seen this plot a thousand times, each one cheesier than the next.  The boy, his passion, his father, his passion, the two butting heads, add in a wild card that disturbs the tenuous balance; it’s been done.  Setting the story here, in L.A., in a Mexican neighborhood, with these cool cars; that was perhaps the only thing he got right.

The cast didn’t help move the quality up the scale, so the director can’t be solely blamed.  Chavarria was college-level, I hate to say, not strong enough for a spotlight like this.  Bichir, who played his father and who you might recognize as Mexican Bob, was better, but was thrust into a role that basically had no depth.  They tried to make up a past drinking problem, but that didn’t work at all.  Rossi, who didn’t seem related to the other characters, was misused entirely.  And the supporting cast was just odd; Tony Revolori, Melissa Benoist, Eva Longoria.  None of it really worked, and the result was general disappointment.

Video – With an aspect ratio of 2.40:1 (1080p HD Widescreen), the video quality of the Blu-ray disc is better than most DVDs, not quite as good as most Blu-rays.  The cars, the graffiti, the streets; there was an eye for visuals here, but not enough to escape the lack of content within the story itself.

Audio – The Blu-ray disc was done in English 5.1 DTS HD Master Audio, with a choice of Descriptive Video Service.  Subtitles are available in English SDH, Spanish, and French.  Also, button sounds can be turned on/off in this menu.  The audio was fine, with some cool backing tracks, but not much else.

Extras – There are a number of special features on the Blu-ray disc, but they are surprisingly short.  Lowriders: Art, Love, and Family is a 1-minute summary of the film.  Ghost’s Arrival is a 1-minute character study.  The Culture of Lowriders is a 1-minute glance at the tradition.  And there are four trailers: Sleight, The Resurrection of Gavin Stone, The Darkness, Incarnate. Rent It.  Lowriders doesn’t succeed in becoming more than a made-for-TV movie about family crisis, even with its alluring backdrop and honest heart.  The storytellers just weren’t good enough to raise it above its default level, and audiences will find themselves let down by the quality.  The video, the audio, the extras; they’re all OK, but nothing stands out as a reason that you should run out to watch/purchase this film.  Better luck next time for all involved, as they’ll need to take this opportunity as a stepping stone toward better and more interesting levels.