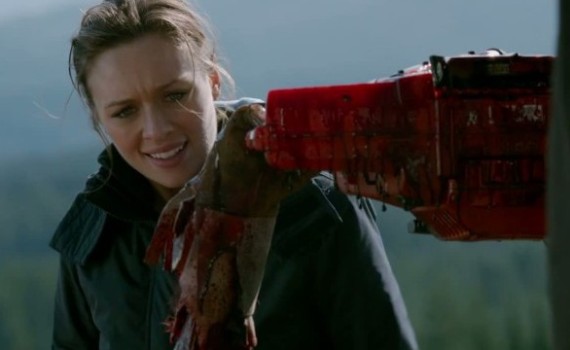 Into the Grizzly Maze could have been subtitled ‘drop an attractive foursome into the woods and see what happens’.  And whatever first guesses come to your mind will probably be exactly accurate.  Fall in love?  Sure.  Fall down and injure your leg?  Of course.  Jump off a cliff into a mountain stream?  Why not.  Run around in nonsensical fashion and reveal plot details with painful slowness?  Definitely.  And if this sounds like the set up for a dozen movies, all done much better than this one, that’s because there are and they are.  Take The Edge for example, a wonderful & underrated survival film that pits deep characters against each other & mother nature, revealing humanity at its purest while avoiding the pitfalls of animal action movies.  This isn’t that, although it attempts to be, becoming more a rip off than an idea, but failing to copy any of the positive aspects of a film that’s approximately four times better. Estranged brothers Rowan & Beckett couldn’t be more dissimilar.  Rowan is an ex-con, a man who uses his fists before his wits, a pariah around his home town, and an all-around loser.  Beckett is a local sheriff’s deputy, an ex-hunter turned conservationist, a married man who takes his responsibilities seriously.  When Rowan returns to town to check up on a missing friend, someone who went to bat for him years ago, the brothers reunite, though not in the way either might have liked.  Beckett takes Rowan into custody after the latter gets into a fist-fight, starting the old routine all over again, causing problems in a town that doesn’t like trouble.  But Rowan will soon be gone, off into the woods where his father used to take him before his parents both died, on a mission to find his friend and perhaps redeem himself, if that’s even possible.

So Rowan enters the Grizzly Maze, a death valley of bears & traps & blind alleys, searching for something that he most likely won’t find.  And at the same time, Beckett’s new wife Michelle traipses the forest taking pictures and protecting wildlife.  Neither know that terrible murders are being committed all around them, loggers & cops & hunters dying by the dozen, all killed by what couldn’t possibly be a bear, let alone the same bear, could it?  Beckett & a friend named Kaley head into the hills to find Rowan & Michelle, only to find themselves smack dab in the middle of a kill or be killed situation.  The bears have gone wild, the police don’t know what to do, hunters want to go after the protected wildlife, and all action leads to the Grizzly Maze, a place that is sure to catch you, keep you, and not let you go alive. I reference The Edge because of the similar set up; a killer bear, the middle of the woods, a desperate attempt to escape, two men with animosity toward each other forced to work together, a love story undercurrent, survival against all odds.  But that’s pretty much where the similarities end.  Where The Edge is part psychological thriller, part man vs wild, Into the Grizzly Maze quickly becomes something new & strange; high-brow horror.  It’s as if some slasher buff watched a thousand campy creature features and SyFy original Bigfoot movies and decided that a combination of the two styles could be brought together, given a legitimate cast, and succeed as a stand-alone drama.  Well, breaking news, it can’t.  This film starts beautifully & intriguingly, but quickly becomes no more than a gore-fest with a raging bear turning everything into a bloody pulp.  Story details are tossed in like garbage, the plot becomes ridiculous, and the point becomes to show off CGI bear effects and horror makeup until our eyes & tastes force us to turn our heads.

What a disappointing film.  Not that I had extremely high expectations, but what I wanted was a cool survival movie, not a b-movie bloodbath that both grosses out and makes no sense.  Imagine a killer who chases bumbling fools and seems to be in a million places at once.  That’s how this bear is portrayed, up until he confronts the heroes, when suddenly he’s stupid again and can’t seem to kill anyone properly.  I wish this superbear would have won, getting rid of all the terrible characters that littered this film and made it even sillier than it was already.  Marsden the brother with baggage, Jane the brother with resentment; a pair of mediocre actors making bad decisions in the woods.  Perabo playing a deaf girl terribly, Thornton playing a psycho hunter even worse; too bad one of them survives.  The cast was terrible as a whole, the film was convoluted with too many dumb plot lines, and it was ultimately no different & no better than a cheap horror film with shaky cam.  That was the most surprising aspect, how amateur & typical & poor the movie became by the end, failing to become anything more than just another made-for-TV spoof; too bad it wasn’t actually made-for-TV nor meant to be a spoof.

Video – With an aspect ratio of 1.85:1 Anamorphic Widescreen, the video quality of the film is both excellent and unmentionable, rising and falling with every scene change.  The film was shot using an Arri Alexa camera, and at times looks beautiful, especially during the pans scattered throughout.  Shot in Vancouver, the landscape is stunning, and given to us with crisp clarity, except for what seemed to be a bug on the lens during a few shots.  But other than the transitional high pans, the picture quality was low and/or normal, nothing to get excited about at the very least.

Audio – The audio was done in Dolby Digital 5.1, with a choice between English and French (dubbed).  Also, subtitles are available in English, English SDH, and French.  The sound quality of the film is fine, with intense background music and a good dialogue balance.  The movie soundtrack won’t wow you, and the quality won’t blow you away, but the audio is passable. Skip It.  Into the Grizzly Maze is startlingly bad.  What begins as a cool survival flick quickly turns into a terrible creature feature, something you’d see late night, not prime time.  And with a cast like this, you expect much better, making their failure to deliver that much more disappointing.  The whole project missed the mark, missing an opportunity to commit to a genre and becoming a muddle in the process.  Bad acting, bad writing, bad action, bad effects, bad blood; there’s almost nothing here to hold on to, other than the attractive people who aren’t even that by the end of the feature.  The video is very nice at times, mediocre at others, the audio is fine but not great, and the extras are few.  Watch The Edge or watch Abominable, but don’t watch a movie that tries to be both.