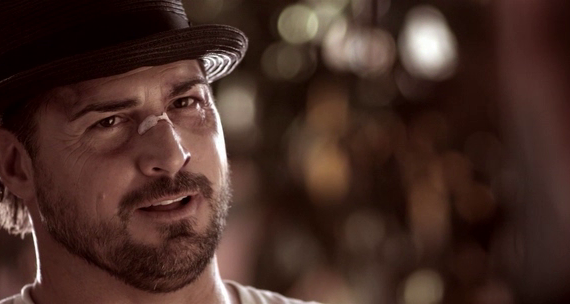 I’ve seen some extremely bad movies in just this style.  I’m not sure what it is about this genre; perhaps I’m not the target audience, perhaps it’s near impossible to make a good shoot-em-up movie, or perhaps they’re just money-makers that don’t really try that hard.  Whatever it is, the crime/action/thriller is not my cup of tea.  Two films came to mind when I sat down to watch Gutshot Straight, partially because of the genre and partially because of the actors involved.  The first was A Good Man, a Steven Seagal guns-blazer that is among the worst movies you’ll ever see.  The second was Throwdown, an only slightly better but still horrible mob/law/human-trafficking mess of a movie co-starring Vinnie Jones.  Now, both Seagal & Jones have small parts in this film, and that worried me, forcing me to assume I was about to watch something as terrible as I’d ever seen.  But thankfully, a surprise was in store in the form of George Eads who, strange as it is to say, saved the day.

For low-life gambler Jack, every day is a struggle.  A struggle to make money, a struggle to pay debts, a struggle to come to grips with the fact that he’s an absolute failure as a father, a completely absent figure who can’t even get his own shit straight, much less improve the life of his daughter.  Jack plays cards for a living, reading people and taking their money, trying to keep his head above water, often without success.  After getting beaten up & threatened by two very powerful men to whom he owes a lot of money, Jack is desperate to score some dough.  So he calls up a man he just met, a wealthy gambler named Duffy, a man who just might have a way for Jack to make some money.  The new “partners” spend the evening at a strip club, get drunk, make bets, all is going well, until they go to Duffy’s house and meet May.

She is a beauty that Jack immediately desires.  She’s a natural seductress, a pawn in some sort of game, and seems to want Jack right back.  But here’s where things get interesting.  What May is to Duffy isn’t exactly clear, and when he offers Jack thousands of dollars to sleep with her, it seems to good to be true.  When Duffy offers even more money if he can watch, that’s when Jack begins to get a little uncomfortable.  The events that unfold that night at that beautiful house will put Jack in a pot that’s about to boil, a complicated situation that he’s just not that clever enough to figure out.  After all, he’s just a two-bit gambler, not a criminal mastermind, and definitely not a killer.  To get himself out of this sticky situation, Jack turns to the two men who own his life, a move that may be necessary, but can’t be very smart. Gutshot Straight has a lot of the same elements you’ll find in countless other cheap, exciting crime movies.  It’s got guns, boobs, booze, cards, cars, the mob, sleazy hotels, whatever you could ask for.  There are fights, betrayals, twists, handguns, drinks, strippers, passion, redemption; about everything you’d expect from a genre that boasts quick action and even quicker resolutions.  And it even has the same faces; Steven Seagal as the cool crime boss that holds a hundred fates within his hands, Vinnie Jones as the muscle behind the throne who’ll break your nose if you look at him funny.  Throw in Stephen Lang the consummate bad guy and Ted Levine who’s always creeped me out and you’ve got a cast & a plot that sticks to its guns & conforms to what the people want.  So if you’re a fan of this type of film, you won’t be disappointed.

But as someone who things this genre is crap, I liked this movie for a completely different reason, and that reason was George Eads.  I’d never seen the guy before, though I know he has a following from 14 straight years on CSI: Crime Scene Investigation.  Coming in, I wasn’t expecting him to be the savior of the film, but he definitely was.  He took Jack and made him likeable, relatable, everyman.  Eads made the character funny & pathetic, but in a way that made him an easy hero to root for despite his many flaws.  I wanted Jack to survive & to win, and I haven’t been able to say that about many other characters in this genre.  Alongside Eads, AnnaLynne McCord was a solid secondary character, sexy & mysterious in a way that at least made your curious if not in love with her.  Eads carried the film, bringing humor and believability to a movie that should have been utterly ridiculous.

Video – With an aspect ratio of 2.40:1 (16×9 Widescreen), the video quality of the film was perhaps the highlight of the entire project.  Scenes were sharply shot, with an eye for color that set the mood.  Much of the film was dark, with a sinister & secretive feel that was juxtaposed by the bright desert sun.  The picture quality was high, with clear images and a casino vibe that added to the enjoyment of the movie.

Audio – Done in Dolby Digital, the DVD has only a setting for English 5.1.  There is also an option of English or Spanish subtitles.  The audio quality was fine, with a good use of sound & sound effects, but without any impressive elements.  There was a ton of dialogue with only a sparse use of music, but the sound in general was solid.

Extras – There are a good many extras on the disc.  First is a chance to watch the film with commentary from director Justin Steele and composer Keith Waggoner.  There is a 21-minute section of behind-the-scenes & interviews with the cast & crew, mainly displaying clips of the film with discussion by the director and George Eads.  There are two very short deleted scenes with Jack that were cut from the film.  Also, there are four trailers: Gutshot Straight, The Prince, Throwdown, and A Good Man. Rent It.  I was surprised that this film was a step above others of its kind.  It stayed true to the genre, but smartly relied on one great actor to lift the plot over the normal trash.  George Eads brought a lot to the character of Jack, taking the movie on his competent shoulders and forcing it to be better than what it might have been.  The video was strong, the audio solid, and the extras many.  Watch Gutshot Straight expecting a dirty crime caper and be pleasantly shocked when you also get good acting and a story.