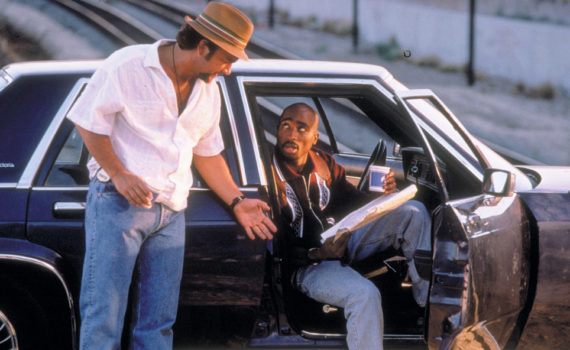 The distinguished directorial career of Jim Kouf began and ended in 1997 (for all intents & purposes) with the release of Gang Related.  Well, what else can you expect from a movie starring Jim Belushi & Tupac Shakur?  If that doesn’t sound like a career-killer I don’t know what does.  The few other name actors Kouf worked with prior to his “big break” in 1997 weren’t that much more impressive: Teri Garr, Christopher Lloyd, Corbin Bernsen, Lou Diamond Phillips, Ed O’Neill.  Actually, Kouf had & is having much more success as a writer: Stakeout, Rush Hour, National Treasure, Money Monster, and the Grimm television series.  Let’s assume screenplays & TV scripts are more his forté and give the guy a break, since, really, Gang Related is much better than it ought to be, much better than you might expect, and is at least one of the more entertaining games of Movie Who’s Who that you’re likely to play. Detectives Divinci & Rodriguez aren’t exactly what you would call clean-cut cops.  In fact, they’re about as crooked as you could imagine, creating an illegal ring of drug trafficking & drug money theft that would curl the whiskers of any local judge.  These partners excel at taking evidence from the station, luring drug lords into phony deals with the product, taking the cash, killing the witnesses, putting the drugs back under lock & key, but pocketing the loot.  Sounds devilishly ingenious, and for ten attempts in a row it works.  But the eleventh time it won’t just be a dirty dope-pusher that they kill, and the process of hiding the evidence won’t go quite as smoothly as it usually does.

Their latest kill, the one that was supposed to be their last, was accidentally an undercover DEA agent.  Whoops.  Hey, how were they to know he was just posing as a cocaine kingpin and not one for real?  But, no matter, they’ve pinned murders on innocent folks before, what’s one more random guy in prison, more or less?  Not so fast cats, this time will be different, and much more dangerous.  In the process of covering their tracks, the duo get in way over their heads, with evil bookies, crusading cops, crafty strippers, high-priced lawyers, other criminal cases, and a homeless man who might not be exactly who he appears.  ‘From bad to worse’ is an expression these two will get to know all too well over the course of the next few months. The best part about this movie is the cast and the fun you can have talking about their lives outside of this film.  Jim Belushi is the star here, which is fairly humorous, as we know his career wouldn’t go much further than b-movies, voice-overs, and cameo appearances.  Not so funny is the fact that this would be Tupac’s last film, his first being the cult classic (and my personal favorite) Nothing But Trouble, where he appeared in Dan Aykroyd’s impound lot as a member of Digital Underground alongside Humpty Hump.  Lela Rochon had her moment in the sun in the 90s, but that was about it, Wendy Crewson we recently saw as the pushy reporter in Room.  A couple other actors you’ll recognize: David Paymer, Gary Cole, James Earl Jones, and Dennis Quaid.  Not too shabby, at least for the purpose of this theoretical game.

But now back to the movie.  It wasn’t half bad, if that can be seen as a compliment, and it probably should be.  A new Tom Hanks movie, you say it’s “not bad”, that’s a nice way of saying it is actually kind of bad.  But a Tupac-led film, one where an angry K-9 cop is his partner, you call that “not bad”, that’s on your way to a backhanded compliment.  For a late-90s crime caper starring a second-hand Blues Brother and a rapper, Gang Related is a bit better than you might expect, though in no way an eye-catching piece.  There’s a little dark humor, some enjoyable scramblings, the side actors are strong, and the plot doesn’t lose its way until the very end, propping up a papier-mâché movie that you forget is completely hollow. Video – With an aspect ratio of 2.35:1 and shot using Panavision cameras & lenses, the video quality of the film is much better than you might expect from a 1997 VHS reel transferred to a Blu-ray disc.  The clarity of the picture quality is surprisingly nice, with a crisp image and nice 90s color.

Audio – Done in 5.1 Surround with an option of English subtitles, the audio features a strong soundtrack, a fine balance given the media, and not much else to write home about.

Extras – There are two special features on the Blu-ray: a trailer for the film and a 10-minute featurette covering behind-the-scenes sequences and interviews. Recommended.  You can do worse than watching Gang Related, which is my way of endorsing the movie without tricking anyone into thinking it’s Turner & Hooch, let alone The Departed.  A weird mix of both, set in the 90s, given into the hands of unworthy lead actors?  Perhaps, though even that would be a stretch.  But this film is enjoyable on its own accord, an odd time capsule for sure, and something that is entertaining at its core.  The video quality is quite nice, the audio mostly forgettable, and the Blu-ray not full of extras.  So if you’re looking for an unusual film, something you don’t stumble across every day, something you can watch for the celebrities that pop up at the oddest times, you might be in luck.