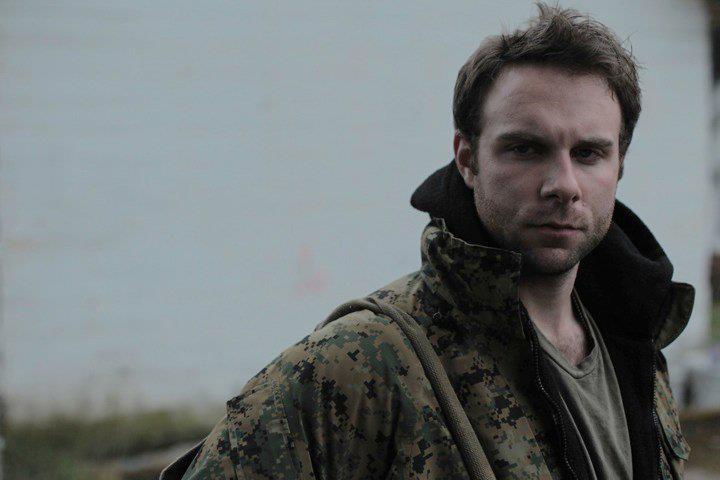 One of the ways Americans use the cinema is for escape.  We watch comedies, thrillers, even dramas, as a form of entertainment, an enjoyable time to sit down and view something fun, separated from the world in which we live.  Of course, we also use the cinema as a collection of current ideas, a portrayal of real life, and a way to exhibit modern problems.  Fray is the latter, a film made to humanize an actual issue.  With the complicated wars that the United States is involved in, and with the difficulties that returning soldiers seem to be facing at a higher (or at least more discussed) level, the acronym PTSD has become a common one.  PostTraumatic Stress Disorder is the development of life-altering symptoms related to a traumatic event, be it assault, injury, death, or the witnessing of these acts.  It’s a term that is now, unfortunately, a part of our every day lives, as our military members attempt to combat not only the enemy in front of them, but the struggle within. Justin is an average guy put through abnormal events, resulting in a man who doesn’t quite know where he fits.  As an American Marine serving multiple tours in both Iraq and Afghanistan, Justin was part of a team.  He had soldiers, friends really, relying on him to keep them safe, trusting him to have their backs, and working with him toward a common goal.  After a debilitating injury to his leg, Justin returns stateside, looking to slide back into the fabric of existence there, but finding that almost impossible.  After a year, his disability still hasn’t gone through, leaving him to look for jobs in an economy that doesn’t seem to need him.  And with his injury, there is only so much he can do, so often he can work, and only a few employers who care to deal with the problems that come with a gimpy vet who can’t quite put the war behind him.

And for Justin, those problems are many.  In an attempt to juggle working as many hours as his leg will allow and taking classes toward his degree, he finds that he can’t make ends meet, that he can’t even pay for his crappy apartment, and that often he has to go without food.  Nightmares of the war he left behind haunt him both while he sleeps and while he tries to make it through the day, something that’s becoming increasingly difficult.  His anger outbursts keep him from developing meaningful relationships, his leg keeps him from getting ahead, and there seems to be nowhere to go but down.  Help comes unasked for in the form of a beautiful professor, a woman who sees past Justin’s trauma and into the good man beneath.  And an employer, who is also a vet, wants to lend a hand in whatever we he can.  But it’s up to Justin to figure out his next move, to accept help for a rising problem, and to make it past what it quickly turning out to be the hardest transition of his life.

Recent Hollywood films have broached this topic, turning our attention toward PTSD and the soldiers that need more than just our thanks for their service.  American Sniper and Fort Bliss are two different looks at life after the corps, both helping audiences to understand the problems facing veterans when they return home.  But Fray came first, tackled that subject before these other films, and remains a very gritty portrayal of a solider in need.  It’s a low-budget Indie version of stories that have made a lot more money, but this problem doesn’t need name actors or exotic sets, it’s an issue that speaks for itself.  To say that this film is realistic is an understatement; it’s an uncomfortable look into a life that has suddenly become lonely and expendable.  Justin could be any number of soldiers who come home to no work, no money, and no future, an outlook compounded by a disorder that is becoming far too common.

I’d like to stop there and leave the film aspect out of the equation since the subject matter is so relevant and important.  But, alas, I’ve got to talk about the production of the movie, and, specifically, how it wasn’t very good.  Bryan Kaplan as Justin was the best actor of the bunch; a good thing since he was the uncontested lead.  But his performance was nothing close to Oscar-worthy, a one-note portrayal of a troubled man, leading to scenes that felt too scripted and not natural enough.  At least he was heads & tails better than everyone else, if that’s something to be proud of.  Marisa Costa as the love-struck professor might have had girl-next-door looks, but her acting ability wasn’t as attractive.  None of the side characters or extras were even passable, although they did feel like people you might meet in any dull town, something that could have been to the film’s credit but somehow wasn’t.  No, audiences will need to forgive a lot of bad acting and amateur directing if they’re to appreciate the message meant to be delivered here.  And that message is important, is powerful, and is real; I just wish a more talented bunch had gotten their hands on it. Video – With an aspect ratio of who-the-hell-knows, the video quality is both neglected and poor.  The main visual was one of rain, rot, darkness, and despair; a fitting backdrop for the mood of the film perhaps, but not a very pleasant viewing.  Color and clarity were given a backseat to the story, which is fine, but it puts the actors in more of a focus, which turned out not to be a great thing.

Audio – There are exactly zero audio details associated with this disc, as well as zero audio options on the DVD.  No language options, subtitles choices, or any details are available.  There is also, basically, no music in this film, as all the audio other than the occasional bar scene is developed through dialogue.  Scenes are meant to be oppressive, dark, and without much relief, and the audio helps that goal to succeed.

Extras – The only extra features on the disc are a trailer for the film and a still gallery comprised of ten pictures from the movie. Rent It.  Fray is definitely a movie that can only be appreciated by those looking for a believable understanding of PTSD, the fate of the American soldier, and the stories of those who return home to nothing.  It won’t win audiences over with the details; acting, set, music, great direction.  You must know what you want from this film, care deeply about the real life issue here, and expect little else.  The video quality of the film was underwhelming, the audio was nondescript, and the extras were few.  This is an organic documentary more than it is a drama, and could be enjoyed as such.