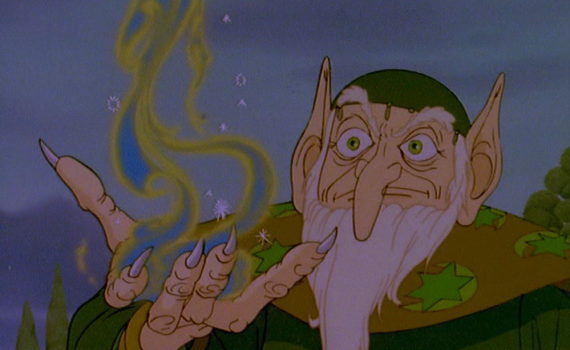 Many of us have heard of, watched, or grew up with the offbeat animation of the 70s and 80s, which includes The Hobbit, The Return of the King, and The Last Unicorn.  We’ve also seen the beloved Christmas classic canon, much of it stop-motion, that appears on local stations every holiday season, like Rudolph, Frosty the Snowman, and Santa Claus is Comin’ to Town.  All of these dated gems are a creation of Rankin/Bass Productions, a company that thrived on its variety of animation, and went out of business in 1987.  But one extra classic oddity escaped my notice over the years, The Flight of Dragons, a film done by this same group, in the same style, and with the same resulting magic. The magic of the Universe is slowly losing its power, as science grows in dominance and people lose faith in the wonder of the unknown.  In the land of dragons and fantasy, it is of utmost importance to hold on to the waning magic, before it is all lost and no other dimension can access this creative force.  Four wizards rule the land, and they must come together to create a haven for all things magical, one that can be tapped into but will always be protected.  Carolinus of the green magic brings his three brothers together to will this realm into existence, but the fourth, the dark red wizard of war, Ommadon, wants nothing of the plan.  He’ll bring men under his control, let them battle themselves until only he survives, until all the Universe is his to command.

In order to stop this wicked plan, Carolinus must send forth a quest to steal the crown of Ommadon, thus allowing the other three wizards to create the magical oasis.  A powerful dragon will go, so will a noble knight, but one more warrior is needed, and he must be the most unique of all.  He must come from another time, another place, another dimension, a land called Boston and an era called The 80s.  Peter Dickenson, a man of both science and of fantasy, a genius with his head in the clouds, but someone who knows nothing of fighting, must come join the merry band as they embark upon a doomed adventure.  They will encounter evil magic, nasty creatures, crafty elves, beautiful maidens, and ultimately their destinies. 1982 goodness at your fingertips in every cell, The Flight of Dragons is a slice of Americana that we didn’t know we had but now we desperately need to own.  When it came out it went straight to video, and it isn’t as well-known as its contemporaries, but it is easily as good.  If you’ve seen the trippy classics of this era you’ll known exactly what you’re getting into, and honestly this one isn’t even quite as weird.  I was surprised that they took the time in each scene to explain the story, to make sure we weren’t lost in the fantasy.  This resulted in less adventure time and some lack of character development, especially toward the end when we met characters that joined the quest but they basically got zero screen time, but it was worth it to have a plot that made sense.

The voices on display here are a welcome addition to the entertaining animation, and you’ll recognize some iconic ones right away.  John Ritter as the hero is cool, especially since he’s passed, this is now another way to revisit his talent and his humor.  Harry Morgan is the lead wizard, best known for his role on M*A*S*H.  And James Earl Jones lends his bass tones to the villain, which of course fits perfectly.  There are some dragons, some dragon lore, some wood elves, a few beautiful princesses, a giant, castles, evil spells; what more could you ask for from this genre?  My kids absolutely loved The Flight of Dragons, I was impressed as well, and if you missed this gem growing up, make sure to give it a shot now. Video – With an aspect ratio of 1.78:1 (1080p HD 16×9), the Blu-ray version of this old film isn’t half bad, but of course doesn’t hold a candle to modern Blu-ray discs.  The animation stands up on its own though, its quality cannot be denied, regardless of how far we’ve come since the 80s.  The colors are nice, the transfer was handled well, and you won’t be disappointed in the visuals.

Audio – The disc was done in DTS-HD Master Audio English 2.0 Mono, with an option of English SDH subtitles.  That’s it as far as the audio goes, except for an original song by Don McLean which, I mean, come on, you can’t beat that.  The sound has a certain amount of age to it, but that’s to be expected, and I don’t remember a ton of warble or problems, so that’s a positive.

Extras – The only special feature on the Blu-ray is the option to watch the Standard Definition Television Version. Highly Recommended.  I’m lucky to have found this film and to have watched it with my family.  It’s a movie that’s right down my aisle; fantasy, animated, the 80s.  But somehow I missed it, didn’t even know it existed, and I’m glad that’s remedied now.  If you enjoyed the similar hits from this era, you’ll enjoy this one too; it’s surprising that only a couple thousand people have rated it on IMDb, but the few who have gave it a 7.8/10 composite, which is nothing to sneeze at.  A folk music theme song, some celebrity voice-overs, the “science” of dragon flight; really, it’s a gift.  The video is rather well done, the audio is fine, there’s only the one extra, so the technical aspects are a mixed bag, but one one is coming in expecting much more than that.  Watch with confidence and for a special experience.