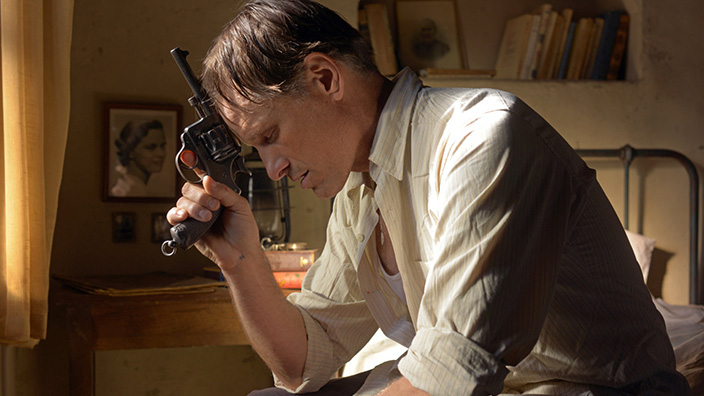 Far from Men will make it two unique, subtitled, Viggo Mortensen films that I’ve reviewed in the span of two days, the other being Jauja, both released in 2014.  In Jauja, Viggo speaks both Danish & Spanish, in Far from Men both French & Arabic.  And that’s mostly not dialects learned for the movies; Mortensen is fluent in English, Danish, and Spanish, while also speaking more than a bit of French, Italian, Norwegian, Swedish, and Catalan.  Pretty impressive stuff, especially for an actor by trade.  And what an actor; Viggo is compiling quite a fascinating resume.  Crimson Tide, G.I. Jane, A Perfect Murder, LOTR, A History of Violence, Eastern Promises, Appaloosa, The Road, A Dangerous Method, The Two Faces of January; there are some excellent selections in that filmography, and add this one to the list as another solid piece of cinema from a highly talented yet underrated actor. In Algeria in 1954, choosing sides was a part of life, and often a part of death.  Battles raged between the French government and the guerrilla freedom fighters, both struggling to hold onto a way of life, both refusing to accept the inclusion of the other.  For a school teacher named Daru, the war was long over, having fought for his homeland in years gone by, settling in the Algerian countryside to teach children to read, not to be a part of any political war, no matter who was fighting who.  But his past service is about to catch up to him, as his soldiering makes him the only option for a difficult task.  A local man who killed his cousin must be taken to town a day’s march away for justice, but getting there won’t be easy.

Mohamed is a willing prisoner, but Daru an unwilling jailor.  He doesn’t want to anger the people of the village by taking this man into custody, doesn’t want to run into any rebels on the road who might want to take the pair prisoner, doesn’t want to join the French forces in murdering the people he grew up with, and doesn’t want to put his life or important career in jeopardy over the wrong choice.  But duty is duty, and the two men begin their journey across a warzone to a place where one will die and the other will be forced into decisions that will change his life.  Bonding over their shared experience, Daru & Mohamed begin to see each other as men, not enemies, sharing more than stories on their way; sharing humanity. Far from Men took what could have been a tired, buddy premise and took it to a higher place than I had expected it could go.  The classic elements are here; a reluctant companionship, two very different backgrounds, a common goal, and a friendship that grows from seeing each other stand up no matter how hard life tries to knock you down.  Setting that story in the rebelling countryside of Algeria shouldn’t have worked, but it did, and credit to all involved for pulling it off.  The relationship between the two men never felt contrived or stupid, despite many of the common elements of similar movies we’ve seen before.  Using quiet moments and real emotion, the film was able to hold back from becoming something washed up, blossoming into something special instead.

Having two foreign languages that felt so smooth & natural when spoken by these actors went a long way toward keeping the film from feeling fake, creating a true story vibe instead, giving us depth of character and not Hollywood actors attempting crappy accents.  Viggo is on some sort of a roll, pulling off this character as if he’d been a persecuted Algerian schoolmaster all his life.  His ability with languages is incredible, and must have been an extremely exciting asset to the film.  Reda Kateb I know much less about, and he’s only been in the American cinematic scene for a few years.  I recently saw him in a small role in Lost River, but I expect to hear his name pop up much more frequently in the coming years.  As a pair, the leads worked seamlessly together, kept the pace up & the story pointed in the right direction, and delivered a great piece of work that should be talked about much more than it currently is.

Video – With an aspect ratio of 2.35:1 (16×9), the video quality of Far from Men is top-notch.  Filmed using Red Epic, Panavision Primo, G-Series and Angenieux HR Lenses, the stunning landscape is captured perfectly and each scene takes on its own beautiful personality.  The picture quality is very high, with a clarity & brilliance of color that are gifts from the cinematographer, making the visuals of the film another great piece to a wonderful puzzle.

Audio – The DVD was done in Dolby Digital 5.1 Surround, with an option of 2.0 Stereo.  There are three languages spoken in the film (French, Arabic, & Spanish), with English subtitles available.  The audio quality was almost as impressive as the video, with a nice balance between speech & effects, and also a good use of quiet moments to let the emotion shine through.  The sound was well-balanced and thoughtfully orchestrated. Highly Recommended.  Far from Men is a film full of positives, elegant moments everywhere you look.  The acting is great, each scene is beautiful, time was taken to set up the story, restraint was used to elevate the ending.  Every detail of the movie seemed thought through and intentional; something that you shouldn’t need to say about a film, since they should all be, but that’s the way it is.  And especially with this genre, this dramatic plot featuring two unlikely allies; so many have come before and failed miserably.  But not this one, it shines, and it delivers perfection around every corner.  Even the video & audio were strong (though the extras of the DVD are left lacking), promoting a film that not only has good substance but solid technical aspects as well.  Viggo wins a big one here, with a film that I won’t soon forget.