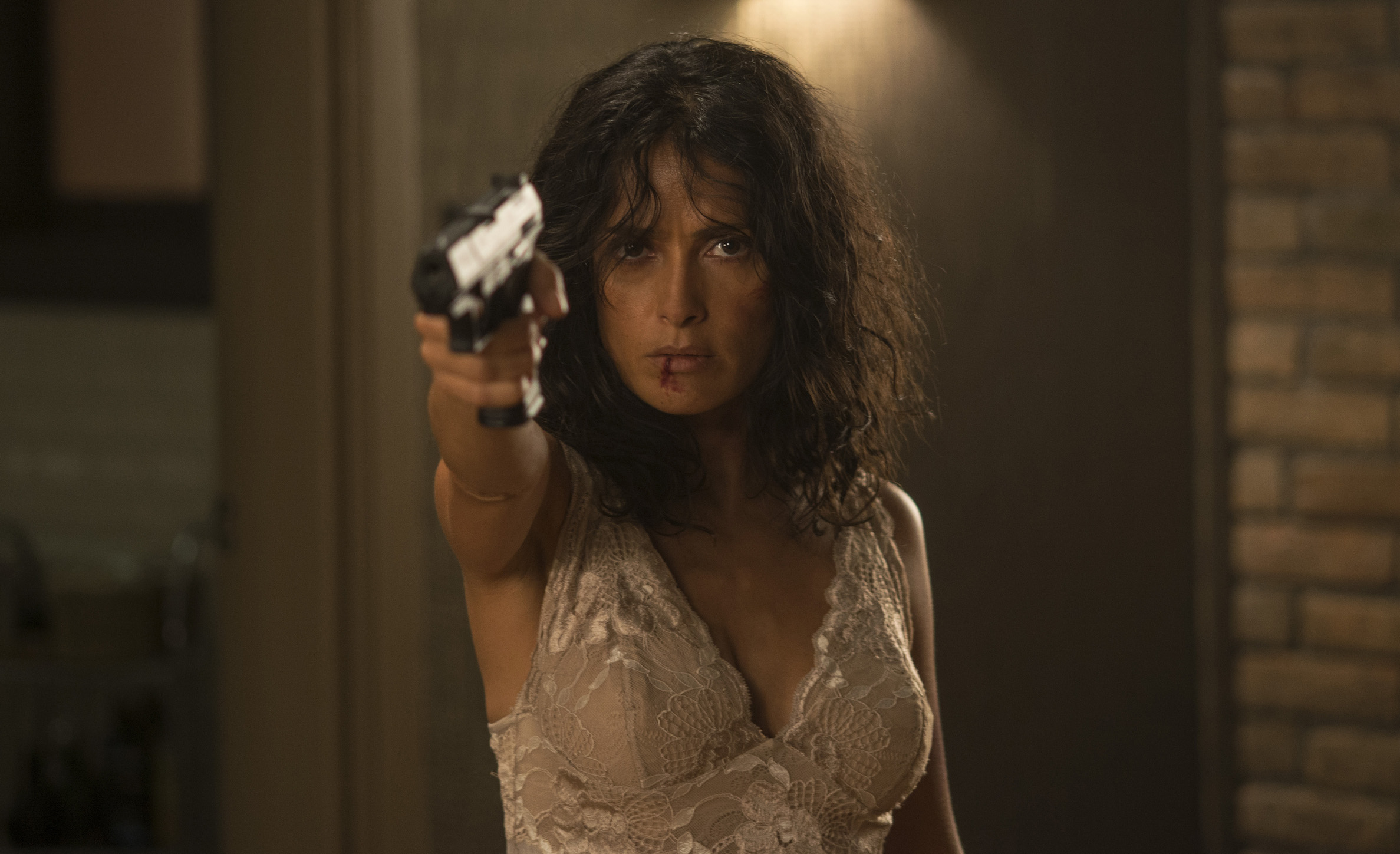 There’s a classic & somewhat epic scene in Kill Bill that Everly immediately brings to mind.  In it, Beatrix goes up against a gang of pop/ninja warriors called the Crazy 88.  The scene seemingly lasts forever, with Beatrix killing members one by one in a battle that has more blood spurts than a handheld horror film.  It’s an intense moment, and it shocks your system with death, bringing over-the-top action to a movie that is actually a very long dialogue laced with moments of pure chaos.  And it works because the gore overwhelms you, impressing you with the gravity of the situation, but fades away after a few breathless minutes.  Everly is like an hour & a half of that scene on loop, bludgeoning your brain with blood until you literally could not possibly take any more.  And then it gives you more, unasked for & unappreciated, more, more, more. Everly; title & title character, the heroine of our tale, the bad bitch from the brothel.  She is a sex slave, a woman captured four years ago and forced into prostitution.  She lives in a swanky apartment with a whole team of whores, all owned by a distant figure named Taiko who hand-picked all the ladies, creating an empire of flesh that he governs over with an iron fist.  Or should I say ‘samurai sword’, for the Japanese big shot sees himself as a man of honor, of status, and of a god-like ability to decide the fate of others.  So, Everly leads a terrible existence, used by men, treated like a treasured lap dog, devoid of love in any form, and always with the knowledge that her daughter, who she was forced to leave behind as an infant, is growing up without a mother.

Time to do something about it.  In connection with a detective who is giving her aid, Everly begins the process of exposing her owner, of breaking the cycle, and of finally gaining her freedom.  But Taiko is not a man to be trifled with and he sees all, understanding everything you intend to do before you even know you want to do it.  And so the torture begins, Everly’s punishment for becoming a “traitor” to her master, for speaking to the outside world when she should know so much better.  There’s one thing Taiko didn’t take into account though; Everly’s desire to live, to see her daughter, to protect her family, and to leave this hotel hell once and for all.  So a battle ensues, one woman against an army of men, with no quarter & no hope, a battle to the death. First, the blood.  My god was there a lot of blood.  And I’m not squeamish, I don’t mind people’s heads being blown off or their limbs being hacked away from their bodies.  I watch horror, slashers, creature features, and the aforementioned Kill Bill is a great example of a ton of gore as well.  But here’s the distinction: horror movies often go comically over the top, Kill Bill went fakey in an incredibly disgusting yet humorous way, and movies like The Departed are so realistic that you accept the gore as part of the truth of the story.  Everly took a different route and in so doing failed miserably to make all the bloody deaths a solid part of the fabric of the film.  The first dozen killings; fine.  The first handful of blood pools; OK.  But as time went on and it didn’t stop, didn’t become funny, didn’t vary, and didn’t leave me with any feeling other than nausea, I decided that perhaps someone had forgotten to hire an editor.

And jokes aside, the film desperately needed paring down.  Not in length, but in content.  It was a never-ending barrage of death, and I understand that the film’s story centered on a character killing her way out of a trap, but after so many fight scenes I started to lose interest in who killed who.  So many weapons, so many characters, so little substance, and no good acting to speak of; not a recipe for success.  And I’ve mentioned other movies in this review; that’s because Everly is a mash up of so many other films that it feels completely hijacked.  Kill Bill, Oldboy, Saw, Planet Terror; aspects from each of these films surface in turn, leaving the story of this movie swimming in others, never rising above the ones that inspired it, never becoming original.  There’s the crux of the issue really; Everly feels more like homage to better concepts than a unique idea on its own, leaving me wondering why I wasted my time. Video – With an aspect ratio of 2.39:1 Widescreen 1080p, the video quality of the Blue-ray was impeccable.  The film was shot using a Sony CineAlta PMW-F55 camera with Kowa Prominar Lenses, creating a product that is visually stunning.  The picture quality is all you could ask for, with a clarity of vision and resolution that should impress.  The blood could not have been more clear, the action intensely captured, or the apartment more detailed.  But the best video in the world won’t make you love what you’re watching more than your personal taste allows, so be careful investing in the high quality of the Blu-ray if the low quality of the film ruins the effect.

Audio – The audio of the film was delivered in 5.1 DTSHD-Master Audio.  Subtitle choices include English, English for the deaf and hearing impaired, & Spanish.  The sound quality was a bit of a puzzler for me, as I felt something that I’m not sure everyone will agree with.  The dialogue was often quiet, whispered at times, and I was forced to turn up the volume to hear it.  Then there wouldd be an explosion that rocked my whole house, a noise bomb that I did not enjoy.  For me, the balance between voice & effect was way off, but others may enjoy the intensity of the action compared to the relative calmness of the dialogue.

Extras –  There are a few extras on the disc, though nothing very exciting.  The film can be watched with Creative Commentary with director Joe Lynch, co-producer Brett Hedblom, and editor Evan Schiff.  It can also be watched with Technical Commentary with director Joe Lynch and cinematographer Steve Gainer.  And lastly, there is a “Silent Night” music video by Raya Yarbrough & Bear McCreary, directed by Joe Lunch. Skip It.  If I had more time, I’d go back and watch the movies that Everly steals from in order to get the taste of this film out of my mouth.  It borrowed far too much, lost all originality, overwhelmed with gore, and failed to deliver the substance that I would have liked.  It became a shell of a story that allowed for far too much blood, something that someone along the line somewhere would have need to recognize and take action on.  Sadly, the movie as a whole was an over-done bloodbath, coming across so heavily that by the end I was figuratively sick to my stomach.  The video was excellent, the audio was over-powering, and the extras weren’t incredible.  Watch Kill Bill and Oldboy instead, back to back if you have the time, and enjoy those phenomenal action films.  Everly just doesn’t fit that category.