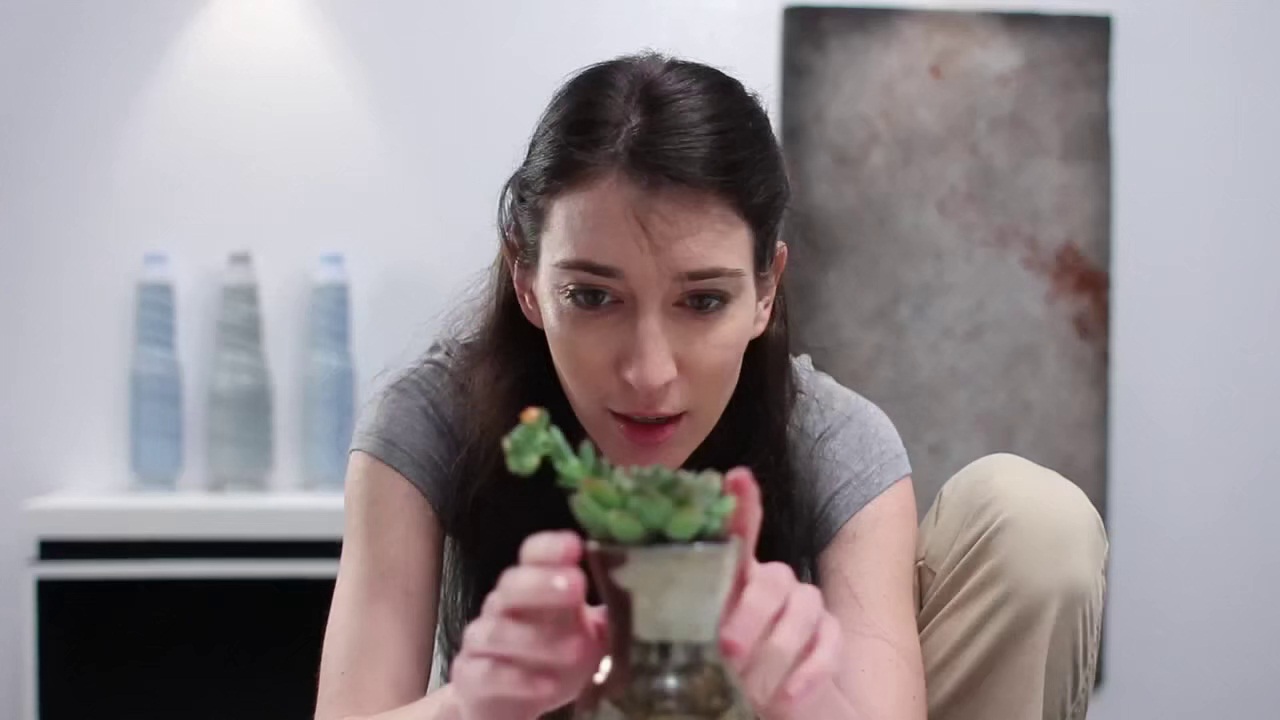 Sometimes indie films turn out to be just a couple friends from film class who stumbled upon some money and decided to make a movie.  Such seems to be the case with Earthrise.  It’s hard to judge it as an indie flick, or even low-budget sci-fi, although it falls into both of those categories.  It’s hard to judge it as a film at all actually, since it really is three characters attempting & failing to act within the confines of a plot that’s no more thought out than a scene from a hat thrown out as improve in the middle of class.  I’ve seen great sci-fi and I’ve seen awful e sci-fi, hilarious 80s sci-fi and sci-fi with all the technology in the world put to terrible use.  But rarely have I seen might-as-well-not-be sci-fi presented this poorly, and hopefully I won’t ever again. The future’s so bright we’ll need to wear shades, right?  Well, more like visors on our space helmets, but close enough.  In the years to come, Earth will become an inhospitable planet.  Mankind will look elsewhere for a place to live, and Mars will seem like the best possible option.  The vast majority of humanity will move to the red planet, leaving our home behind to fend for itself.  However, a small group will stay behind to help revitalize the surface, giving a future return a small chance.  This tiny minority will be our hope of green things to come, and each year a small group will be sent “back home” to help out, to aid in the process, to add new blood to the operation, and to continue the project that just might save a planet.

In order to be selected for the journey to Earth, candidates must be specifically skilled and pass an intense interview process.  This year, Mars’ lucky winners are Marshall, Vivian, & Dawn.  The trio will travel to Earth with supplies, receive more information on the way there, and arrive ready to help in the rebuilding of our home world.  But it’s not exactly as simple as that.  First, the Revive Project is a bit secretive, and these three don’t have any real knowledge of what is waiting for them down on the surface.  And secondly, something on board the ship is causing them to hallucinate, see people who aren’t actually there, and turn on each other just when they need one another the very most. That’s about as much information as you’ll get from this film, even after having watched it in its entirety.  You could ask me to spoil the movie for you by giving you more plot details and revealing the secrets of the project, but I couldn’t possibly do that.  Why?  Because I still don’t know.  To say that the story is vague would be an understatement.  It might be more accurate to say that no one really knows the answers to the questions audiences might think up because no one took the time to really think it through.  Instead, we’re given basic sketches of the situations and left to assume the rest.  Revive is not exactly magnanimous?  The hallucinations are purposeful?  I really have no idea, I’m just guessing, and not with any enjoyment either.

Maybe the actors themselves don’t even know what’s going on.  It really was like they were thrust into an improv scene, made up the lines, bounced around a room to imitate that the ship was rocking, and than started imagining things just to spice up the moment.  Each actor might have been playing out a different scenario for all we know, and there might not have even been a real end goal.  I guess we’ll never know, and honestly I couldn’t care less.  If I had wanted to see amateur thespians pretend to be Martians, pretend to see loved ones in their cabins, bumble around white rooms looking disoriented, I would have gone to a local comedy club, suggested that scene, and laughed at their attempts to make sense of it all.  At least then there would have a little humor to it. Video – No video specifications are available, and really, the poor picture quality is the least of this film’s problems.

Audio – No audio specifications are available either, and again, you will barely notice the bad sound while the film rolls.

Extras – There are two special features: the option to watch the movie with commentary and a trailer for the film. Skip It.  Let me reiterate; Earthrise is barely a movie.  It’s more a film school project given a bit more money than usual.  Oh and a giant fake spider.  And a giant fake crocodile.  I’m not kidding, those things are in this movie, and even though they shouldn’t be, they’re probably the best parts.  This film is completely ludicrous, not because it jumps the shark, but because it does almost nothing, playing with ideas but never executing them.  It’s a brainstorm of sci-fi thoughts that are never put into motion, but somehow are made into a feature length film.  I’m not sure why someone would get behind this film in order to see it made, but the 250 people in the world who have seen it do not thank you.  The video & audio are entirely forgettable, there are a couple extras on the disc, but taken as a whole this movie is unwatchable.