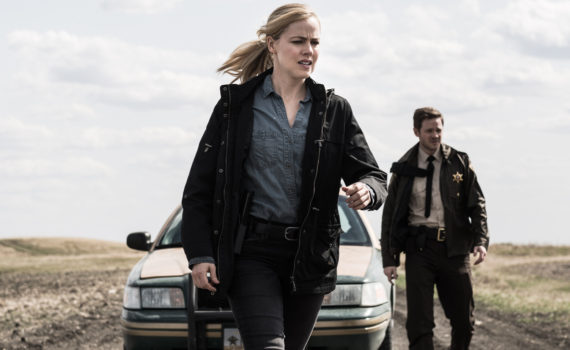 Clay Staub’s filmography won’t take you long to read, he’s only been involved in four films ever, but he has helped on three legitimate movies as an assistant/second unit director, which is to his credit: Dawn of the Dead (the good one), 300 (the original), and The Thing (the remake).  But Devil’s Gate marks his first attempt at writing and at helming a project, which we know is a completely different animal.  I’ve seen this SyFy-quality feature referred to as an episode of the X-Files with absolutely no mystery or talent, and that’s about right, although I see it more as an attempt to recapture Signs with absolutely no excitement or ability whatsoever.  Either way, this is a movie you don’t need to see, and since it’s so utterly terribly, you really shouldn’t want to. A disappearance in a small town has warranted the attention of the FBI after the local cops can’t handle the task, but I’ve got news for you; they aren’t going to understand what the hell is going on either.  Maria Pritchard and her son Jonah have gone missing en route to her sister’s house, a place they stay often given the unpredictable demeanor of their farm’s pater familias, Jackson Pritchard.  Maria and Jackson could not have been more in love, but his religious fervor and her multiple miscarriages have driven a wedge between them, a fresh gap in which Jonah finds himself stuck.  So off to Auntie’s, but unfortunately they never made it there, and their car has not been seen since.  Jackson seems the obvious suspect, he’s as mad as a hatter these days, but there’s more to this tale of woe than meets the eye.

Special Agent Francis is on the case, and it’s a personal one for her, after just failing to save a girl from danger on her last mission; this time she won’t accept failure.  She’s got to work alongside the local police, but Sheriff Gruenwall isn’t being very helpful, he doesn’t even want her heading out to the Pritchard’s spooky farm.  But that’s exactly where she goes, partnering up with young Deputy Salter, who went to school with Jackson and doesn’t want to see any harm come to his lovely family.  In the middle of nowhere, the pair of investigators will stumble upon something more sinister and confusing then they ever could have imagined.  Where exactly did Maria and Jonah go, what specifically is Jackson guilty of, who is hidden in the basement, why do strange storms hit only the nearby fields, and when is this all going to make any sort of sense?! I almost feel like spoiling the suspense for you now and revealing what all the secrets are so that you don’t feel in the least way curious about how the story comes together, because everyone should be spared this terrible movie, everyone should be warned away before it’s too late.  The twist isn’t even that great, I’ve probably already hinted at it too much, but I guess I won’t spoil it all the way, even though I can’t in good conscience recommend that you watch what honestly is one of the worst movies I’ve ever had the misfortune of watching.  Not that you can’t see it coming for yourself, it doesn’t take much to notice and assume that this film will be terrible; just the cover art of the DVD should tip you off enough to know that you don’t want any piece of this sci-fi mystery gone terribly wrong.

Where to start, where to start; I guess we’ll begin with the name that might catch your attention.  Milo Ventimiglia got a lot of buzz after This Is Us, the super dad who is also super hunky.  I watched some of that show, enough to know that it was way too sappy, and really the only good thing about it was/is Sterling K. Brown.  Whether Milo can actually act or not I can’t say, I’ve not seen him in enough, but this movie isn’t doing him any favors.  His accent, his demeanor, his god-awful lines; not what you want.  Luckily, I guess, everyone around him was equally bad, including Amanda Schull as the lead in a role that she wasn’t nearly talented enough to take on, and Jonathan Frakes with a cameo that was plain dumb.  The entire film is idiotic, with a plot that makes barely any sense, dread that’s just there for dread’s sake, and a crew behind the camera that must simply not have known how to make a good movie.  Don’t get curious and make me tell you what happens at the end, because I will, if only to save you from yourself.

Video – With an aspect ratio of 2.40:1 (1080p HD Widescreen), the video quality of the Blu-ray is the highlight of the film by default, but still isn’t anything to get excited about.  The picture quality is clear, that’s not the problem, it’s just that the cinematography is uninspired, the effects are bad, and the color is always a very dull gray/brown that is completely faded/dated.

Audio – The disc was done in 5.1 DTS-HD Master Audio Surround, with an option of 2.0 DTS-HD Master Audio Stereo.  Subtitles are available in English and in Spanish.  That’s it for the sound, it’s not very good either, with no score to speak of and no positive characteristics.

Skip It.  You’ll thank me later for watching this movie so you don’t have to, or actually you won’t, because you’ll never know what I saved you from.  There are b-movies that work, you can be taken off guard by those and you learn to appreciate them, but Devil’s Gate isn’t one.  It’s a bad movie that never even gets to the point of being so bad that we can laugh along with them.  No one was laughing here, this was serious, we were supposed to be on board for a story about weird happenings on a rural farm and the plucky detectives who crack open the conspiracy.  But that was never going to happen; every single piece was too awful to enjoy, even at the film’s expense.  The video was drab, the audio was boring, there aren’t extras; even the technical aspects will put you to sleep.  Look elsewhere for entertainment, far elsewhere, because you won’t find a sliver of it here.