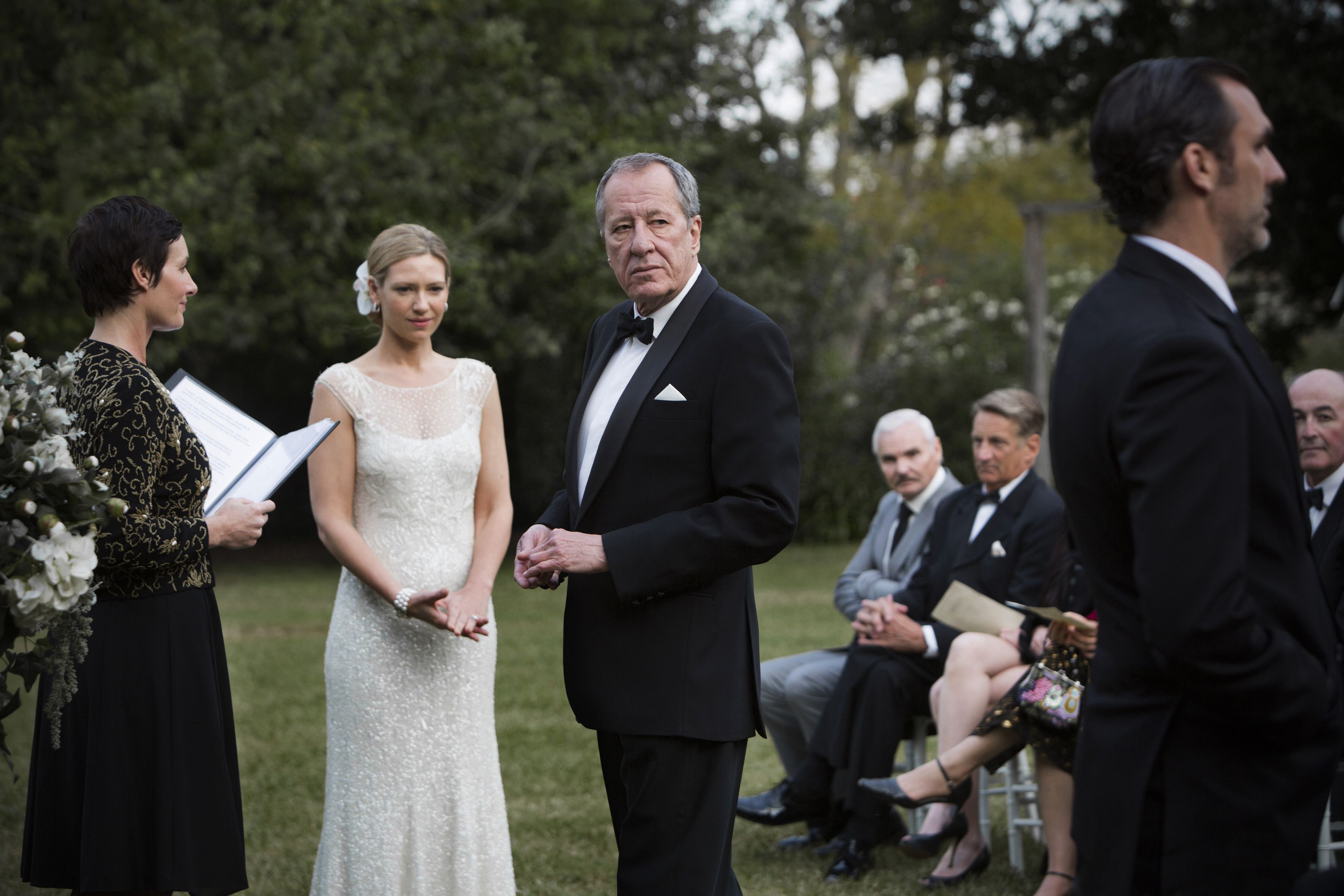 Simon Stone’s first attempt at either writing or directing a feature film was a complete success.  Well, in directing more than writing perhaps, but taken as whole, The Daughter is a movie that works, and the first wave of credit should go to its director.  Stone is an Aussie actor and stage director who tries his hand at cinema for the first time here, and someone we ought to be seeing more from in the near future.  He’s got the touch, and what’s even more important, he seems to know when to let his actors do the work for him, something that I’m sure is invaluable in the world of theatre.  What ultimately makes this film a success is that, when the director gave the reins to his cast, they handled them with admirable expertise, resulting in 90 minutes of high-quality dramatics.

In a small, backwoods town in Australia, life revolves around the timber mill run by Henry, the local land baron.  When the mill loses its last contract, Henry announces its closure, which means the end of employment (and probably life) in the area for a large portion of working-class men.  Henry might feel badly, the company has been in his family for decades, but there’s nothing much to do, and he’ll have to accept the ire of the local people.  His own plans march on though, as he has a wedding coming up, a marriage to his much-younger housekeeper Anna, a beautiful woman who wants a powerful man.  Flying in for the ceremony is Christian, Henry’s estranged son, and a catalyst for what will happen next.

Christian reunites with his high school and college buddy Oliver, a regular townie who will be looking for a new job as well, with the mill closing.  He lives with his wife Charlotte, his aging father Walter, and his brilliant daughter Hedvig, a simple yet happy family.  Christian can’t boast the same, with a difficult childhood and frequent moves defining his growing up, with a marriage on the rocks haunting his current life.  But for the moment, the two friends enjoy their reunion, and prepare for a few days spent together.  This peace will be broken by a long-held secret that can’t stay hidden any more, a skeleton in the closet that will effect the lives of every member of both families.

Stone’s direction is pretty impressive for an amateur, although his stage experience should be taken into account and absolutely aided him in making this film.  He was able to commit to a style in a very specific way and in a manner that was impressive for a beginner.  At first, I wondered at the gimmick, but when he refused to sway from it or apologize for using it throughout the film, I began to appreciate that he had chosen a way for which his characters to interact, a sort of delayed conversation and partial voice over that just felt smart.  It was almost as if he didn’t care whether you liked it or not, or perhaps more accurately, he felt confident that you eventually would.

Like I said, a director can only take a project so far, an intelligent director eventually hands the story off to his cast, and luckily for Simon, this cast was more than up to the task.  Schneider may have been the lead, and he’s a recognizable face for American audiences, but Leslie was just as important to the plot, and delivered just as strong a performance.  The vets of the movie, Rush and Neill, were perfection, playing their respective pater familias parts just the way you imagine they would.  The revelation here is the title actress, Odessa Young, who made her big screen debut with The Daughter, but who we’ll be seeing a whole lot more from very soon.  She’s special in that Joey King sort of way, something that can’t be ignored, and something that can literally make a movie.  She didn’t have to though, the cast and crew all held their own, joining together to make a surprisingly wonderful and pleasantly shocking film. Video – With an aspect ratio of 2.35:1 (1920x1080p), the video quality of the Blu-ray disc is very nice but rather unnecessary.  This is an emotional drama, and never needs the clarity of the Blu-ray medium or the ceiling to be stretched at all.  The visuals are strong, the cinematography excellent, but the potential of the picture is never realized since the director focused on content rather than technicalities.

Audio – With a choice between DTS-HD Master Audio 5.1 or 2.0, the audio quality is solid.  Without frills perhaps, like the video, but solid nonetheless.  Subtitles can be engaged in English SDH; no other language options are available.  The best part about the sound is the neverending supply of background music, an overarcing theme that helped sweep us into the story. Highly Recommended.  There are powerful emotions at play in this film, taking us to places that not every audience member will want to go.  But if you’re willing to travel there, the rewards might be worth it.  Stone weaves a complicated plot more deftly than I would have thought likely, and his cast takes up any slack, delivering a moving drama about family and pain that I won’t quickly forget.  The daughter at the center of the story is a shockingly pivotal figure, forcing us as parents to take a look at ourselves, whether what we see in the mirror pleases us or not.  And the acting throughout the film, minus a bit of overreaching at the end, forces the plot home.  As far as the disc goes, the video is adequate, the audio strong, but you won’t be impressed by the extras, so perhaps look elsewhere for stunning technical feats.  Watch this film for a refreshing look at a new director and new actress, as well as an excitingly intriguing story that won’t leave you alone.