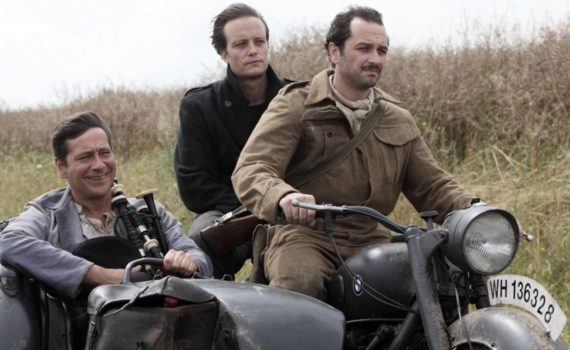 There was such a vast percentage of humanity affected by WWII that we’ll literally never run out of stories to glean from that time period, to turn into sagas and dramas that both teach a lesson and give us a taste of the history that we dare not forget.  Come What May comes at the era from a different direction, showing us a world gone mad through the eyes of those whose stories haven’t been loudly told.  In a way, these are tales from before the heart of the war was at hand, tales of the lives that were changed by the approach of battle, just as so many were destroyed by the actual chaos.  I appreciate the fresh viewpoint and the atypical delivery, but what’s even better is the quality put in to bringing this chapter to life, and the heart written into every scene. In the spring of 1940, Germany was already on their way to a sure victory over a cowering Europe.  Having already taken neighboring, Germanic territories, the Nazis were pushing on into France, crushing the token British and French forces, ending the war before it had scarcely begun.  The Brits were forced back to Dunkirk, the French never stood a chance, and Hitler’s forces began their takeover of the farmlands of central Europe, the fields that would feed a world army.  The French peasants were left with few options; stay in their villages and hope the German tanks would pass them by or flee south toward a possible safe haven, leaving everything they had ever known behind and in the hands of Nazi occupation.

This is the story of the struggle of the native people of this land, as they fought to hold on to any memory of their past peace, a dream that was slowly fading away.  Hans, a German rebel who worked for an underground radio station but was forced to leave his homeland, finds himself in a French jail, with no support from either side.  His son, Max, is living in a village that will soon be on the move, led by their mayor, a man who is used to having others follow his decisions but has never had to travel through a war zone before.  When Hans escapes jail, only to befriend a marooned Scottish officer, the two trek across the countryside in order to find Max, to find safety, to find some sort of sanity in the insanity that is the beginning of a world war. We know the history of the Holocaust very well, and there is no saturation point when it comes to the films that can tell us the stories from that horrible time, both from a dramatic standpoint and from a humanitarian one.  But there was much more to the war than battles and terror, there were smaller tales that may have slipped through the cracks of time, individual accounts that might be smaller on scale but still deliver a powerful impact.  Come What May is a very personal film that sheds light on a very unique group of people; the displaced French.  Their struggles may not have been as vicious as others, but the way in which their roots were uplifted is just another crime to throw at the feet of the Nazis, just another way they destroyed so much.

It’s clear from the beginning that this movie is slightly documentarian in style, partly war drama, and always full of real feeling from a director/writer who felt that he had something very important to share with us.  It won’t capture your attention, entertain you, if that word can be used about the abuse of a population, in the way that many American-made war films can, but it also won’t bore audiences with an overly-artistic depiction of the times either.  Instead, it falls somewhere in the middle; a little action, a bit of beauty, but mainly focusing on telling a generally true story as it might have happened, allowing us to be there and to understand the panic behind the flight of so many who would never see their homes again.  The acting is strong enough to share the message, the Spring scenery is beautiful, the German advancement is frighteningly steady, and the film as a whole is a well-made point piece with just enough Hollywood to hook those who don’t want to forget what happened all those years ago. Video – With an aspect ratio of 2.35:1, the video quality of the Blu-ray disc isn’t exactly stunning, but it won’t disappoint those looking for a crisp image from a high quality medium.  The picture is saturated with rich color and showcases the beauty of the countryside, as well as the dark gore of war.  It’s a strong visual, with realistic cinematography and a nice brightness.

Audio – Done in DTS-HD Master Audio, the audio quality of the disc is quite excellent.  There is also a choice of 5.1 Dolby Digital, as well as subtitles in English.  Throughout the film, French and German subtitles will automatically appear.  The sound quality of the Blu-ray is superb, with an incredible soundtrack as well, crafted by the renowned Ennio Morricone.

Extras – There are many extras on the Blu-ray disc, beginning with an option of audio commentary with director Christian Carion.  A theatrical trailer is available to view.  The Making of Come What May is a look into the creation of the film.  Behind the Scenes with composer Ennio Morricone is exactly that.  And an Interview with Christian Carion and Richard Peña can be selected for your enjoyment as well. Highly Recommended.  An unusual WWII film, at least in the direction from which it attacks the subject, Come What May is nevertheless an important piece to the greater puzzle of those impacting years and the people who survived to tell the tale.  We learn about the quick French collapse, but we don’t know much about the peasants who fled for their lives, and this is their story.  In that, it’s a film worth watching, with an added bonus of some solid acting and storytelling as well.  It won’t join a group of award-winners perhaps, but it at least deserves its time in the sun.  The video is pleasantly done, the audio is a highlight, and there are many extras to enjoy as well.  Taken as a whole package, there is much to appreciate here, especially for those wanting to dive into learning about WWII and the people who make it worth studying.