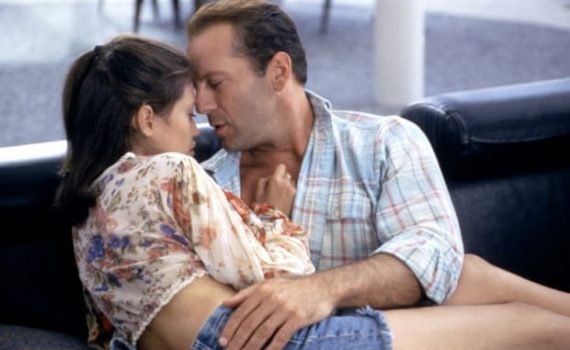 That this movie exists is the first surprise; what isn’t surprising is that it’s so awful.  I must have missed its release in 1994, and I would have been too young to see it anyway, although right on the cusp of wanting to.  I can remember a time that seeing skin on USA Network was a big deal, and this film has that sort of feel, a too-shabby-to-be-anywhere-else vibe that’s much more becoming of a TV movie than an actual feature film.  It comes across as a terrible idea gone even more terribly wrong, something you’d expect to see at 2am one summer night, not starring Bruce Willis and being advertised as a legitimate entity.  It’s not, it’s really not, even if you remember this movie fondly from when you were a teenager and simply wanted to see Jane March naked.  You still can, this Blu-ray is a thing you can watch, you may just want to avert your eyes for literally every other scene. Pyschoanalyst Bill Capa has a nice practice going in New York, has good mentors, feels confident in his inherent competition with other therapists, has a full client list, and a large office in a high rise that was built to impress.  But the death of a patient right before his eyes will derail his gilded path and send him down a spiraling tunnel toward rock bottom.  All of a sudden he can’t keep it together, can’t stop seeing that girl laying dead at his feet.  And oddly enough, he can no longer see the color red, the color of blood, it has turned to gray, and a part of his emotional side has gone as dead as his senses.  Because he needs a break from the stress, Bill heads to L.A. for a little vacation to see his college buddy Bob Moore, a fellow psychologist who has also done rather well for himself.

However, instead of helping Bill with his problems, Bob has a situation of his own that he needs help with.  He has a regular Monday night group therapy session, and he thinks that someone in the group has been threatening his life.  It’s up to Bill to find out who it is, all while attempting to recover from the death of his own patient.  And it gets worse.  Before Bill can crack the case, Bob is murdered, probably by someone in the group, each of whom has serious issues that make them untrustworthy at best.  Sondra is a sex addict, Clark is an obsessive compulsive, Buck can’t get over a personal tragedy, Casey has anger problems, and Richie can’t identify his gender.  Bill’s own life will soon be in danger, as a mysterious young woman enters his world and ignites his desires, only to lead him toward self destruction. This really is the perfect late night, channel-surfing, steamy thriller, except that it’s supposed to be an actual movie, and it wholeheartedly is not.  It’s a joke, a spoof, right?  Except that it isn’t, and that’s what makes it so horrible; thanks Buena Vista.  All the pieces are there for a Red Shoe Diaries or Silk Stockings episode (why are people obsessed with feet?), but Color of Night is supposed to be something more, while clinging to the exact same recipe.  Los Angeles, a wealthy professional, a host of odd characters, a sexy twig, car chases, a wise-cracking cop, sex in a pool; this really is the worst genre ever, when you start to dissect it into parts.  It’s like a hot tub; you can only enjoy it with your clothes off and if you don’t think too much about it.

A lot of people will remember Jane March for this film, because she’s all kinds of naked, which is really the only reason to watch, if you’re still hanging on to a crush you had for her when you were 14 in 1994.  Bruce Willis gets kind of nude too, which is more shocking, considering what a superstar he is these days, but I guess everyone’s gotta start somewhere.  What shocks me more than the skin is how anyone in their right mind could have cast Willis as a psychologist, how they could possibly have thought he would be believable as an intelligent person.  I like him just fine, but this role is ridiculous enough without casting him in it.  And then there’s the rest of the cast, which is just odd: Scott Bakula from Quantum Leap, Brad Dourif from Lord of the Rings, Lance Henriksen from Aliens, Kevin J. O’Connor from The Mummy, Eriq Le Salle and Kathleen Wilhoite from ER.  It’s a bizarre who’s who, which only makes the movie more out of place than it already is.  The tropes run rampant, the apartments are outrageous, the California nights drip with sweat, the detectives crack jokes, and we all get a little dumber watching what is basically an anti-filmmaking clinic with its very own theme song. Video – With an aspect ratio of 2.35:1 (1920x1080p) and shot using an Arriflex 535 camera, the video quality of this Blu-ray disc is as poor as you would imagine coming out of the 90s, especially when it really doesn’t seem like much effort was put in to making this film any sort of good.  There are a few moments when they highlight the color red, per Bill’s weird condition, and the death at the beginning looks cool, but other than that everything in this movie is a mess.  I actually wish it had been fuzzier, so I would have witnessed less.

Audio – The disc was done in English, with a choice between 5.1 Surround and 2.0 Stereo.  That’s it as far as the audio in concerned, and the only other thing that needs mentioning is the theme song.  Well, that and a continuing thread of music throughout that wasn’t too terrible.  The theme song, with words, plays at the end, and it’s comedic gold.  Also, it gives the film its title, which I don’t remember being referenced otherwise, so there you go. Skip It.  The story and screenplay for this film were written by Billy Ray, who would go on to become a well-known professional after this initial foray.  Again, it’s OK to start at the bottom and work your way up, no shame in that, it’s just weird to look back on the crap people once voluntarily connected themselves with; you wonder if they regret it now or if it was the start they needed.  Either way, this strange mix of smut and sensationalism exists, and I’ve now watched it, for which I am wholly disappointed with myself.  I didn’t need to see Bruce Willis roll a remote controlled tank up Jane March’s naked torso in the bath, nor hear him vocalize the utterly abysmal line “In the what-I-wait-for department, you’re it baby.”  I almost gave up right there, but I finished, which allows me to impart some wisdom to you; don’t watch this movie.  The video is bad, the audio is funny, the special features are few; basically there are no redeeming qualities.  You might have seen Color of Night when you were younger; you don’t want to go back and relive it, trust me.