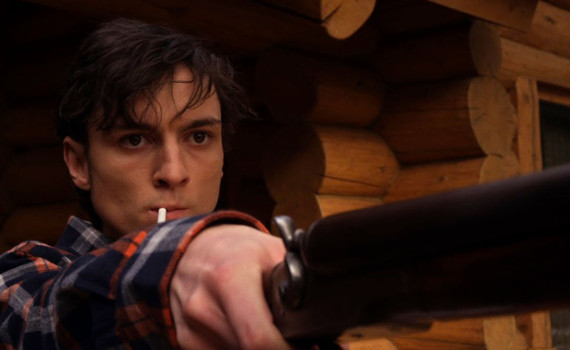 If any indie horror flick has ever succeeded against all odds, Blood Punch is it.  Consider the ingredients.  Director Madellaine Paxson has never attempted directing before, only writing & editing for children’s TV shows: Hercules, Tarzan, Mary-Kate and Ashley, Kim Possible, Lilo & Stitch, Go Diego Go, Johnny Test, Power Rangers.  And speaking of, Cawthorne, Tennet, & Boyland currently star in Power Rangers R.P.M., a reboot of the popular 90s television series.  Even writer Eddie Guzelian specializes in kid’s stuff: The Tigger Movie, The Little Mermaid 2, Jackie Chan Adventures, Cinderella III, and, of course, Power Rangers.  So, in essence, what we have here is the cast & crew of the new Power Rangers TV show deciding to make an independent horror movie in which they can do all the cussing, killing, and screwing that they’ve been bottling up for all these years.  What’s shocking, what’s inexplicable, is that the result is one of the best low budget gore-fests that I’ve ever seen. Milton is in some trouble, in way over his head, and in for the wildest two days of his life.  Busted for running a meth lab, Milton was once a promising college student, a chemistry genius destined for great things.  Now he’s in a rehab facility with no idea what’s to come next, and no good use for his one true talent; cooking drugs.  That is, until Skyler comes along.  She joins the recovering addicts, not as a user herself, but with a proposition.  She’ll make someone in the group extremely rich, if they’ll only join her in making an impossible amount of crystal meth.  Sure it’s illegal, yes it’s dangerous, and of course they’re locked up in a rehab ward, but since when have little difficulties stopped the enduring American spirit?

So Milton finds himself partnering with Skyler for a variety of reasons: 1) he wants out of jail, 2) he can’t stand to let his talent go to waste, and 3) he is instantly & insanely in love with this woman.  Of course, she sleeps with him to convince him to go along with her plan, and that helps, but Milton’s new-found love will keep him following Skyler’s lead, no matter how dicey the operation becomes.  And it’s about to become dicey alright, as soon as Russell joins the party.  Russell is Skyler’s boyfriend, seems to know that she & Milton had sex, enjoys guns, loves killing people, and is generally insane.  The trio head to a secluded cabin to cook the meth and sell it for a giant profit, but here’s where things get weird.  There’s something supernatural going on in the woods, something ancient that twists reality, something that begins when blood is spilled, and let me tell you, a lot of blood is about to be spilled.

Talk about letting loose.  From Power Rangers to Reservoir Dogs in an instant, this group of coworkers let all their pent up aggression & debauchery come spilling out over the course of 100 minutes, holding nothing back except nudity, which wasn’t even missed.  There was no time for that anyway, as too many people needed killing in such a short amount of time.  Imagine how much fun this crew must have had devising a thousand ways to kill each other; crossbows, scythes, guns galore.  It was as if they brainstormed all the rotten ideas they were keeping inside while making TV for kids, let it all tumble out, and then decided to find a way to implement every concept into a movie, instead of choosing one or two.  And the brilliant part is that it worked.  Without filtering language, without censoring topics, without muting the violence, Blood Punch was able to shock us and yet at the same time come across as a thought-out film.  I have no idea how they kept the whole thing from launching itself over the top, but they did, and bravo to the whole cast for pulling it off.

The trio of characters interacted perfectly, creating a balance that helped keep the insane plot in line when it could have gone off the rails.  Cawthorne as Milton, the nerdy puppy dog who quickly becomes a pit bull.  Tennet as Skyler, sexy & suspicious at the same time.  Boyland as Russell, the villain you could watch die a thousand times.  And you get to, that’s the genius behind this film.  Without giving too much of the story away, the drugs are only the beginning of the plot, the supernatural element takes off with a life of its own, and that’s where the movie really succeeds.  It’s like Memento meets Worm, the latter being a very similar indie horror film that’s at once extremely weird and surprisingly successful.  Blood Punch is a little more polished than Worm, a bit more professional, and works even better, giving audiences everything we want to see from gore horror, but adding in quality acting, an acceptable twist, and character development, raising it high above the normal goofy b-movie into a place that’s reserved for the best of the best. Video – With an aspect ratio of 16×9 Widescreen, the video quality is just a touch better than you’d imagine from a low-budget indie horror flick.  There is, thankfully, not a ton of shaky cam, not a wild amount of crappy effects, just blood, blood, and more blood, shot well enough to seem fun instead of crappy.  The picture quality is good enough not to disappoint, with fine color & clarity.

Audio – The disc was done in Dolby Digital, with your choice between Stereo or 5.1 Surround.  Also, there is an option for English subtitles.  The audio quality is OK, good enough, not amazing, but never seems important enough to care much about.  Effects noise was done well, the dialogue is perfectly audible, and oddly enough, the music in the film quickly becomes a highlight.  The soundtrack in creepy, but in a playful way, juxtaposing the situation with the songs, always crafting a slightly manic vibe.

Extras – There are a few extras on the DVD, including six deleted scenes: My Name is Skyler, The Best Part, We Aren’t Dead…Or Are We?, I Don’t Sing, Chainsaw to the Head, It’s the Bad Ones.  There are also six test footage segments: Test Titles, Dead Body Bathroom Scene, Good Morning Skyler, Skyler Group Rehab Scene, Outakes, Teaser.  And lastly, nine minutes of Production Outakes. Highly Recommended.  Blood Punch will shock you if you give it a chance.  It’s a bloodbath done by Power Rangers, it’s a cabin-in-the-woods movie with a twist, it’s a slasher film that only features three characters.  How could that possibly be any good?  You’re going to have to watch to find out, because it’s not easy to explain.  It’s clear, at least, that the cast & crew behind this movie were all in, that they enjoyed making every scene, and that they actually had the natural talent to pull off what so many others have tried & failed to do.  There’s some lighthearted fun here, some real feeling, some cool death scenes, enough substance to keep audiences invested, and a nod to the genre that so many enjoy.  The video, audio, and extras are all mediocre, but anyone who sits down to watch this disc should know what to expect from low-budget horror anyway.  Watch with confidence, and have a good time.