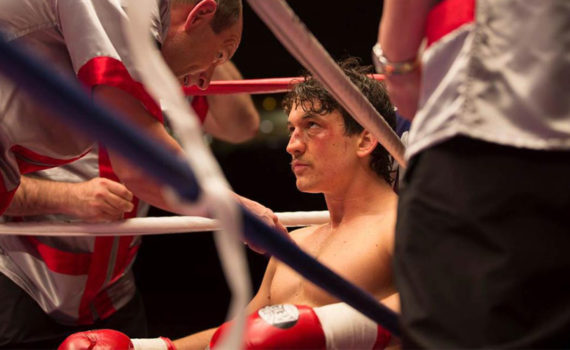 Ben Younger may have copied The Fighter when writing, producing, and directing Bleed for This, but a case can be made that every boxing movie is a recycling of Rocky, or that there’s basically only one way to tell the story we’ve heard a hundred times, with the only change being the name and nationality of the heroic lead pugilist.  This doesn’t dampen our love for the genre though, on the contrary, for some inexplicable reason we want the same exact film shown to us time and time again; it’s like a comfortable relationship with a close friend, if the friend enjoyed punching people in the face and we enjoyed watching it.  Americans are weird when it comes to boxing films, that’s all there is to it, and an explanation as to why may never be found.  I’m on the side that says there’s no reason to go searching, I’d much rather sit back, relax, and be entertained by another sports biopic that I may have seen before, but for some reason never tire of. The story of Vinny Pazienza is one of the greatest American comeback sagas in sports history, exemplifying the no-quit attitude of the athletes who put their very lives in danger every day in order to prove to the world that they are the best of the best.  Vinny, hailing from an Italian family in Rhode Island, was one of the greatest lightweight boxers in the world, taking the title in 1987, but failing to defend it in the late 80s and early 90s.  He had difficulty making weight for his fights, frequently coming in over, even dehydrating his body to the point of exhaustion and series fatigue.  After one crushing defeat, Vinny Paz would hire a new trainer, jump up a weight class, and return to the top of a sport that he loved.

But a freak accident would threaten his young career, a tragedy that would have derailed the forward motion of a lesser man, but only put Vinny out of commission for a relatively short time.  In the passenger seat during a car accident, Vinny’s neck was broken, narrowly missing an entire severing of the spine.  He was put into a Halo, a device that prohibited any movement of the head, and was told that any slight jar could cause him to be paralyzed for life.  Instead of giving up, Vinny began training in the basement of his home, mounting a comeback that would become the stuff of legends.  He would return to the ring to fight his opponents even harder than he fought his injury, a dedication that is truly incredible. If you can’t tell, I like boxing movies.  I won’t apologize for that; I’m absolutely not alone.  Americans are obsessed with the genre in general, and will give even the weakest of the bunch a more-than-fair shot.  You could study why, I’m sure it would be interesting, but the fact remains that the training, the emotion, the fighting, the abuse; it’s all so captivating, even if it’s sadistically so.  Rocky, The Fighter, Creed, Southpaw; we want to watch a man push his body pasts the limits, get into a ring, and win his immortality before thousands of screaming fans.  Even just watching brings forward the adrenaline, makes you want to hit a punching bag and run a mile to an inspirational song.  Don’t look to me for the answers to the whys, because I’m part of the blinded bunch who are ready to step behind these films no matter what.

That said, I think I can critique Bleed for This as a stand alone film as well, not just as another boxing movie, and it stands up fairly well under scrutiny.  Miles Teller may never be as good as he was in Whiplash, that was the role of a lifetime and J.K. basically made the movie, but the kid has talent.  He shows it here, goes all in, and you can tell he’s committed to the part.  It’s Aaron Eckhart who’s the show-stealer in a way, coming out bald and fat like it’s no big deal, which we know it is, even if it was makeup.  Ciaran Hinds as Vinny’s dad was solid, as was his entire family really, and you really get a sense of the passionate support behind him.  Again, a bit of a Fighter clone, a bit of a copycat movie, a bit of a genre flick that won’t transcend the style, but still a film that’s strong enough to enjoy if you’re a fan and good enough to recommend if you’re a critic.

Video – With an aspect ratio of 2.40:1 (1080p HD Widescreen), the video quality of the Bleed for This Blu-ray is top-notch.  The film won’t dazzle you with cinematography or beautiful imagery, the story is much more brutal than that, but what you can enjoy if you wish is the stark reality of the situation and the clarity in which it was shot.  In other words, this isn’t the most impressive Blu-ray, but the crisp picture you want from the media is still there.

Audio – The disc was done in English DTS-HD Master Audio 5.1, with an option of English Descriptive Video Service Dolby Digital Plus 2.0.  Also, subtitles are available in Spanish, as well as the ability to turn button sounds on or off.  The audio quality of the film is quite nice, with a bit of a soundtrack and a good balance between action and dialogue.  Again, this story doesn’t lend itself to everything that the Blu-ray is capable of, but it also doesn’t completely forget the technical.

Extras – There are quite a few special features, if after the movie you are thirsty for more.  There are seven deleted scenes, which you can choose one at a time or watch all in one queue.  Inspired by a Legend is a 2-minute interview featurette.  An Authentic World is a 3-minute segment about getting the boxing right.  And there are a ton of trailers as well: Snowden, Triple 9, Spotlight, Dope, Rosewater, Nightcrawler, Chef, End of Watch. Highly Recommended.  It wouldn’t hurt to be a boxing movie fan before sitting down to watch this one.  We understand that there is a genre, a recipe, and even real life seems to follow suit, so we’ve come to accept and even to love the style.  If you find yourself entertained by that standard, Bleed for This ought to land right inside your wheelhouse.  It’s also just good enough on its own to be enjoyed by those looking for a true life drama.  It’s real, it’s raw, it’s sports at their most passionate, so there must be a larger audience for this film than just us suckers who like Rocky.  The acting is commendable, the story flows nicely, and by the end, the Paz might just be your personal hero.  The video is nice, the audio solid as well, there are a few extras, so the Blu-ray supports the film as well, without becoming the most brilliant visual you will ever see.  Watch with confidence, especially if you’re already an aficionado.