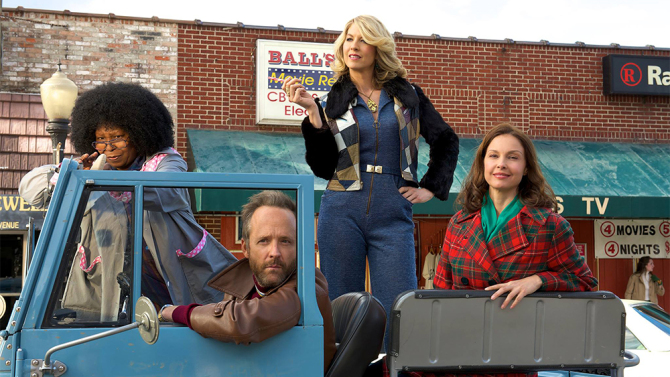 I actually know people from Big Stone Gap, Virginia; my wife’s college roommate and a few of her friends.  I’ve been there for a wedding; a beautiful, backwoods place to which driving is a pleasure.  It’s a sleepy town, secluded, reliant on coal, home of NFL running backs Thomas & Julius Jones, and the setting for this film, a story about big love in a small town.  My slight connection to the locale piqued my interest for the movie and got me on board as far as inserting the disc into my player.  But that’s where my interested ended.  Curiosity, they say, killed the cat, and while Big Stone Gap won’t harm you in any way, the content of what quickly becomes no more than a Hallmark original-caliber film will slowly drain you of the will to live. Life in Big Stone Gap, Virginia in the 70s was relatively quiet, with local drama & gossip being the only thing there really was to discuss and coal mining the only thing there really was to do.  But the yearly outdoor drama sure brought the town together, even if the story was the same every year.  Ave Maria Mulligan, who ran the pharmacy, acted as director.  Jack MacChesney, the strapping miner, played gee-tar.  Sweet Sue Tinsley did ballet, Iva Lou Wade ran the box office, old Flammetta Mulligan sewed the costumes, Theodore Tipton hammed it up in every scene, and everyone pitched in with whatever they did best.  After, a burger & a beer were the order of the night, and everyone went home happy.

For Ave Maria, this simple existence had always been, slowly culminating in 40 years spent in Big Stone Gap without a marriage or a real life.  But the death of her mother would change everything for Ave Maria, and really for the whole town.  Ave learns that the man she knew as her father never was at all, as secrets about her mother’s past come pouring out.  Now she’s questioning her own existence, her own decisions, and the truths she’s believed all her life.  Theodore might love her, but not exactly in the way she needs.  Jack might want her as a wife, but without an ounce of romance.  And Ave might want to see the world before she settles down, since Big Stone Gap doesn’t have much to offer beyond security. The Houston Chronicle called Big Stone Gap a “gussied-up Hallmark movie”, and I could not agree more.  Its stars might dazzle our eyes but they can’t hide the truth, which is that this film has nothing to offer beyond your typical, made-for-TV, cheesy family drama where everything works out in the end.  I don’t know what else they could have added other than John Denver to make this film more small-town-bands-together, they already have Christmas, a funeral, a wedding, a town play, a traveling politician, a mine collapse, and a foreign I-talian man coming to visit.  It’s like a George Gershwin review or an old Rodgers & Hammerstein play; all fluff and no real drama, only set in the Appalachian Mountains and brought forward slightly in time

Director Adriana Trigiani is actually from Big Stone Gap, wrote a book series about the people of the town, and insisted that this film adaptation be shot on location.  Well, the location might be the only thing she got right.  The story is so silly, so unbelievable, even adding in black ladies & gay guys, having the town rally around mixed race families, like doing that in the 70s in the South was the in-thing.  These types of morality plays are fine for Hallmark where only Christian moms are watching, but the big screen requires more, and it didn’t exist here to give.  And we haven’t even touched on the acting yet: Judd exactly as bad as she always is, Wilson as unlikable as he always is, and Goldberg, John Hickey, Jenna Elfman, Anthony LaPaglia, Mary Pat Gleason, & Jane Krakowski presenting caricatures rather than characters.  Prince Humperdinck appearing at the end was the last straw, though honestly, the movie had lost me long before.

Video – With an aspect ratio of 1.85:1 1080p HD Widescreen, the video quality of the Blu-ray disc might be the highlight of the entire film.  They captured the beauty of Virginia perfectly, the fall colors and the majestic mountains.  The color palette used by the director was bright, vibrant, and very 70s.  The picture quality was well-represented in high definition here, and visually you will not be disappointed.

Audio – The Blu-ray disc was done in English DTS-HD Master Audio 5.1, with subtitle choices of English SDH or Spanish.  Menu button sounds can also be left on or turned off.  The audio quality of the film was fine, with strong voiceovers and a constant stream of down-country music.  The soundtrack itself wasn’t amazing, nor was the sound mixing, but the audio was ultimately fine and not a strong factor either way. Rent It.  Calling an actual Hollywood film with actual Hollywood actors a Hallmark Movie is a fairly large insult, but that term fits perfectly here.  No one involved was able to elevate what must be a book written with loads of love into something audiences can share or that represents the intention as well as it deserves.  The set is lovely, there’s nostalgia & real feeling deep down behind the story, but it struggles to come across to us, mainly because of a lack of talent by cast & crew and a reliance on the cheesy themes we’ve seen from made-for-TV movies a thousand times before.  The video is quite nice, the audio is OK, and there are a handful of quick special features if you’re interested.  I imagine the ladies I know from Big Stone Gap enjoyed a love story set in their home town, but to us outsiders it just comes across as a cheap effort with good intentions, not a strong film on its own.