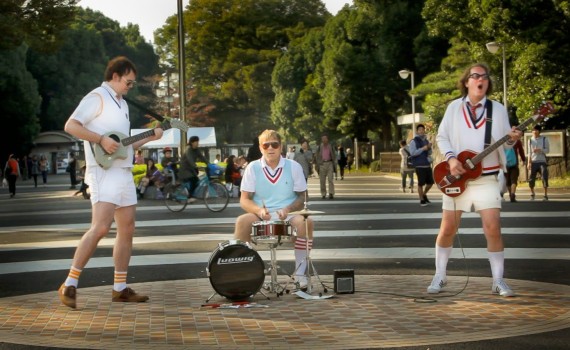 John Jeffcoat’s first (and only) feature-length film was 2006’s Outsourced, a comedy about a manager who moves to India to supervise a call center.  The movie was a success, and apparently warranted a spinoff TV series by the same name, although it would only last one season.  Afterwards, Jeffcoat went to work for MTV, shooting behind-the-scenes footage of Seattle bands.  While there, he met the band Tennis Pro, a trio of musicians who wanted a documentary team to accompany them overseas where they hoped to gain an audience for their music.  Too bad there was no money for the trip, no script for the movie, and no idea how to get things rolling.  But after a successful Kickstarter campaign, the band & crew headed to Tokyo, created a semi-fictional docu-drama, and lived their dream of becoming big in Japan. Phil is an unemployed family man who isn’t happy being a 9 to 5 guy.  David is a professional gambler who is down on his luck.  Sean is a hairstylist who is tired of his clients.  Together, they are Tennis Pro, a pop/rock band from Seattle that has been struggling to find an audience since its inception and that hasn’t created new music in years.  When they meet Alex, a crazy ex-rocker, he proposes a daring plan; take the act to Tokyo, play some shows, build a fan base, and come home to America as heroes.  Phil’s wife isn’t thrilled, David loses all the possible seed money, and Sean’s girlfriend threatens to cut off his buddies’ balls if he cheats on her with a Japanese girl.  But Tennis Pro, after many false starts, is finally on the road.

Or, more specifically, on the plane, and where they’re headed is a place they’ve never been, an experience they aren’t at all prepared for.  Alex, acting as their manager, doesn’t seem to know exactly what he’s doing, the venues that the band is playing in are tiny, the hotels that they’re staying in are even smaller, the food is weird, their luggage is lost, no one attends their shows, and this trip to Tokyo seems like a giant disaster.  But the guys believe in their music, and slowly the city begins to feel like a second home.  Phil makes friends with a free spirit named Mans, David begins what could be a promising relationship with a local girl, and Sean tries his best to curtail his despise for Alex.  The trio are so close to finding fans, and when an earthquake hits the city, they may be the only band who doesn’t cut & run, setting them up for the success they have always dreamed of. What an odd, odd story behind a movie, let alone the story of the movie, which is equally as strange.  I had to look all the information up after watching the film, because I wasn’t quite sure what I was seeing; actors or musicians, scenes or concerts, mockumentary or documentary, fiction or fact.  Turns out, it’s all a bit of both, and, honestly, the movie would have been excellent either way.  What we have here is a real band performing at real shows as they really try to get an audience to support their music.  These aren’t actors, and even the side-characters are played by the crew, so Big in Japan becomes a movie that’s half documentary.  But only half, because the story is fictionalized, the plot is crafted, and this isn’t real life.  Except, it kinda is.  Confused yet?  Well, thankfully, it doesn’t matter, because the film is great however you look at it, entertaining from every angle.

First, the music is incredible, a mix of rock & pop that Tennis Pro pounds out with equal parts true talent and pure charisma.  Their songs are imaginative, classic, funny, beat-driven, and always cool, creating a real-life soundtrack that those of us who don’t live on the west coast are lucky to have heard as live as we could get it.  Secondly, the film is filled with hilarious action and lovable characters, with a pace that keeps audiences interested.  It’s the antithesis in many ways of films like God Help the Girl, which is much more fanciful, romantic, studio, and ultimately unbelievable.  Big in Japan is a film that always feels real, adult, physical, and likeable, mirroring a band that exhibits those same characteristics.  It’s a quirky way to make a movie, but perfect for what the band was intending, and I hope they win more hearts than mine, becoming big not only in Tokyo, but everywhere. Video – Presented in widescreen color format, and without any other details to share, the video quality of Big in Japan takes a backseat to, well, everything else.  It’s a very personal visual, following the characters closely and intimately, but without the high picture quality that we’ve come to feel entitled to.  The shot selection of the film is much stronger than the camera clarity, but that fact only adds to the documentary feel and the realism of what we are seeing.

Audio – The only audio option on the DVD is the ability to turn English SDH on or off, and no other audio details are available.  The sound quality of the film is the same as the video; poor, but understandably so, and even presented in a way that aids the goal of the movie, which is to give audiences an all-access pass to Tennis Pro and the tour that launched their career.

Extras – There are a large number of excellent extras on this disc.  The film can be viewed with commentary in two forms: either from the band (Phil Peterson, Sean Lowry, David Drury) or from the director/crew (John Jeffcoat, Ryan McMackin).  There is a behind-the scenes segment that runs for two minutes and features a song from the band laid under BTS footage.  A seven-minute interview section can be viewed, with discussion about the film from the director and cast.  There are five trailers available: Big in Japan, Wetlands, Cupcakes, Living is Easy, A Wolf at the Door.  And there are five music videos as well: Fishin’, Kimberly, Mix Tape, Rock Over Tokyo, Shopping Day. Highly Recommended.  Big in Japan is more than a movie or even a true story.  It’s the documentation and entertaining presentation of a journey that changed the fate of a band, the humble concert tour that will seem so familiar to so many, and hopefully inspire a few.  It’s half-realism, half-fantasy, but all-encompassing in its honest portrayal of the American rock dream.  Tennis Pro is a talented, exciting band, but beyond that they’re also an example of the struggle to succeed and to be heard; something we can all understand, which makes them all the more lovable.  The video and audio qualities of the DVD won’t impress, but they’re adequate for the format, and the extras on the disc make up for a lot.  Indie, quirky, off-beat, musical, very very strange; these words might all describe parts of both Big in Japan and Tennis Pro, but you’ve got to watch them work to understand their work, and words will not suffice.