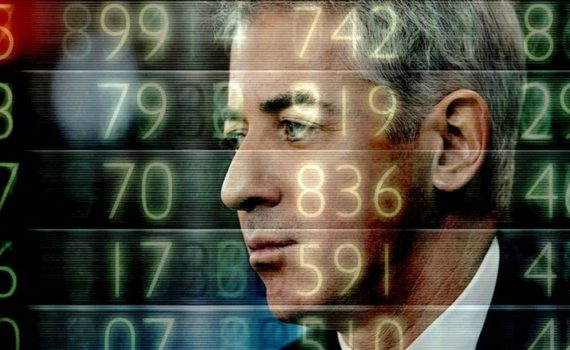 In a time when one of America’s favorite national arguments has reared its bitter head with renewed energy (capitalism vs socialism, free market vs big government, cutthroat competition vs equal protection), Betting on Zero is a documentary that will slide into the conversation with ease.  It’s specifically based on Herbalife; the company, the court cases, the sanctions, and the famous Ackman short.  But it can’t help also being about politics, using this bizarre story to highlight the two polar viewpoints that fight against one another and make our entire country spin.  In case you don’t know much about Herbalife, this documentary is here to fill you in, and it’s also prepared to take sides when it feels the need.  This isn’t unbiased observation, nor is it a positive message we can all get behind and learn from.  Rather, it’s a fearless statement against crooked policies, and a warning for us to open our eyes. Hedge fund manager Bill Ackman was perhaps the most arrogant man in the business, but he made money, a lot of money, and that much green can cover up any amount of flaws.  He knew what stocks to buy, which companies to back, and he made his clients very happy, despite a personality that only a genius can pull off.  From time to time, Ackman’s fund would come across a business they thought was destined to fail, so instead of buying a ton of stock and hoping the price would rise, they bet that the value would fall.  This is called shorting, and it can make certain people rich while a company goes under.  Ackman’s latest target was Herbalife, a vitamin supplement and health shake distributor that he predicted would go belly up in a matter of years.

Ackman believed that Herbalife was a pyramid scheme, not as actual product-selling, multi-level marketing corporation, as they would claim.  It’s not illegal to make money by having people under you and to gain commission on their sales, but it is illegal to turn a profit solely by this method, without any product value.  Ackman argued that Herbalife was built on tricking people into buying the product in bulk in order to enter the system, a product that they then couldn’t sell.  Only those at the very top ever see any income, while those at the bottom watch their life savings vanish.  The Latino community was especially affected by the Herbalife scam, class action laws suits popping up all over the country, even while the giant company expanded across the globe. You can’t talk about this movie without getting into politics, as the director does not shy away from making this a choose-a-side issue.  To be fair, he points out the ways in which Ackman would make money off of Herbalife failing, so of course he wants to convince people that Herbalife is going to fail.  That’s not an issue the film skirts around, but it also makes no bones about how it feels toward the capitalist manifesto and how it specifically, negatively affects the poor, the uneducated, the naive, and the immigrant.  A free market economy is great in theory, but in reality the greedy will always rise to the top, spreading the lie as they do that anyone can reach the same height if they work hard enough, when they themselves had to destroy the lives of countless others on their way up.  Capitalism isn’t fair competition, and we need to stop pretending that everyone has the same chance, that a good work ethic is all it takes to reach your dreams.

Putting politics aside, Herbalife is still a shitty company.  It is based on the idea that becoming rich is worth any cost, that the lives of others don’t matter, that those who don’t succeed are merely weak, rather than taken advantage of.  This film shows footage from Herbalife meetings, from rallies, from training sessions, and the message is clear in each one; get as many suckers under you as you can, they don’t matter, the only thing that counts is you making money off their backs.  It paints the company in a horrible light, and I for one am not sure in what other way it could appear.  We walk along with the protestors and the scammed, understanding that this is an actual crime destroying the lives of millions, not just a Wall St. power play for dollars, not just another capitalist theory, but a practice put in motion that needs stopping. Video – With an aspect ratio of 1.78:1 (16×9), the video quality is as unremarkable as you would expect from a documentary that mostly sits while others talk.  They do add in some graphics to help us understand what’s going on, and we do receive some nice footage of the past to give us context, but overall the picture quality isn’t going to wow.

Audio – The DVD was done in English 5.1 Surround, with an option of 2.0 Stereo.  Subtitles are available in Spanish.  That’s it as far as the audio goes, but there is a nice soundtrack in the back and a nice theme that runs throughout, giving the story some musical weight.

Extras – Only a few special features are available on the disc: six additional scenes and a trailer for the film. Highly Recommended.  Some might say that it isn’t a critic’s job to get political, to take sides on an issue while trying to understand a film.  But with Betting on Zero, audiences don’t really have the luxury of standing in the corner while two fighters duke it out.  We’re put in the middle of the action and asked to form an opinion, not presented with a balanced account that has many sides …many sides.  The director is biased, and so was I coming in, but this film isn’t about us all getting along, it’s attempting to broaden the knowledge of a scam, to expose corruption to as many people as will look.  The video is only fine, which isn’t shocking, the audio is OK, with a nice theme track, and the extras are minimal, so don’t expect much from a technical standpoint.  This is a documentary I would quickly recommend to left-leaners, because they would support it, and perhaps even right-wingers, with the hope that they might learn something.