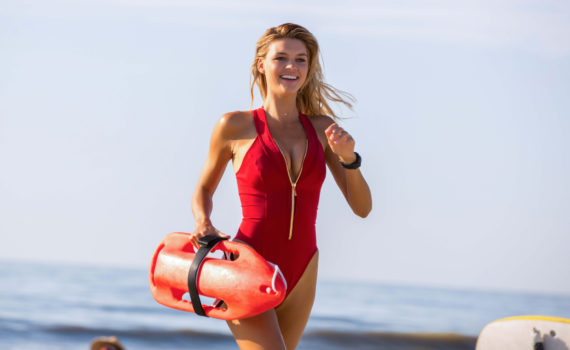 For anyone who grew up in the 90s, Baywatch was a constant TV companion.  It lasted 11 seasons, 242 episodes, completely engulfing the decade in red bathing suits and slo-mo beach runs.  Chandler and Joey of Friends famously loved the show, even naming a pet chick Yasmine Bleeth.  That’s how popular it was, it was featured on other successful shows while it was still on air.  Now, you might scoff at the word ‘popular’, you might rather go with ‘ridiculed’, and you wouldn’t be completely wrong.  Part of why some watched the show at all was to make fun of it, the stupid scenarios, the bad dialogue, the impossible breasts and abs.  As a boy during the era, I watched for Kelly Packard, Nicole Eggert, and Nancy Valen, I didn’t watch for the plot twists.  Whatever your reason was for tuning in though, Baywatch became an icon, and as silly as it was, we still talk about it today.  A movie version just made sense, and I’m glad they made it, the fact that it isn’t really that good shouldn’t come as a big surprise nor does it really matter. Welcome to Emerald Bay, realm of the aqua-god also known as Mitch Buchannon.  Mitch rules the beach with an iron fist, leading Baywatch as part dictator, part saint, part father-figure, and part sea king.  Baywatch has been tasked with keeping visitors safe, a job that they don’t take lightly.  Mitch demands passion from his employees; being a lifeguard isn’t just an occupation, it’s a way of life, and the team is an elite group of water-saviors that also happen to have killer good looks.  Mitch, the muscle-bound behemoth, but gentle underneath.  Stephanie, his right hand woman, his sergeant of the sand.  CJ, the bubbly beauty, but don’t assume she doesn’t know her stuff.  And now the team needs to hire three new recruits, younglings who will be thrown to the waves as sacrifices if they can’t pull their weight on shore.

First is Matt Brody, an Olympic swimmer who can’t stay out of trouble, a hot head who needs a real job with a real purpose if he’s going to get his mind right.  Next, Summer Quinn, a smart cookie who knows her own heart and has dreamed of becoming a Baywatch babe for years.  And last, Ronnie Greenbaum, a pudgy computer expert who loves CJ from afar, has no physical gifts whatsoever, but refuses to quit when the going gets tough.  This trio of newbies will have to learn fast, because danger is always lurking in the water for anyone who doesn’t stay vigilant.  Trouble is working double time currently, as local landowner Victoria Leeds seems to be up to no good, and the beach is due to suffer.  Dead bodies and hard drugs keep popping up wherever Victoria goes, and Mitch knows that she’s the snake in the grass.  Convincing local law enforcement is a tougher matter, so Baywatch is on the case, and these limber sea lions won’t let their Lieutenant down without diving in and rescuing the town before it’s too late. I can’t imagine watching this movie without some prior information about the show; it would be like visiting a foreign planet where there are creatures resembling humans, but they act like in they’re in a vaudeville comedy and they look like they just came off an assembly line.  And that’s just part of it; not having any connection to the show would make these characters insane, this story absurd, and the jokes so incredibly bad that you’d feel the need to call the authorities.  Basically, you can’t watch this movie without first having enjoyed the show, at least a little, at least to laugh or ogle or something.  But assuming that you tuned in at some point during the 90s, there’s enough about Baywatch the film to entertain even the most casual fan of the series.  The character names are recycled, allowing you to remember the old cast.  The unbelievable plot becomes acceptable when the players make fun of themselves.  The slo-mo, the running, the bouncing, even Hoff and Pam; so much from the old has been brought to the new, and I think that’s why the movie works.

Now, hey, let’s be real, it doesn’t work that much.  There are only so many asses you can parade in front of the camera, so many jokes you can make about penises before even the lewdest fan starts to get bored.  That didn’t surprise me, the step toward the adult that this film took, like the old show had been combined with Silk Stalkings, but it did feel a little juvenile, like they should have gone all the way (bare boobs) or nowhere at all (hairy man chest).  What did surprise me was the relative background that the ladies occupied, while the gentlemen were front stage.  Specifically, Daddario should have been featured much more heavily than Bass, who was a poor man’s Josh Gad and didn’t make me laugh once.  She’s actually a good actress and did OK in her side story with Efron; I’m not sure why she and the other women were secondary characters.  The Rock was good though, he’s just a stud, and maybe he’s even getting strong enough at acting that he can lead movies of this caliber.  He was cool, the cameos were nice, the eye candy was constant, no one took themselves too seriously, Dwayne even calling Zac ‘High School Musical’ at one point.  So if you watched the show, if you understand that the movie version is going to be equally dumb, there’s a good chance you sit through this film and come out the other side smiling. Video – With an aspect ratio of 2.35:1 (1080p HD) and shot using an Arri Alexa XT Plus camera with Panavision G-Series, ATZ, and AWZ2 lenses, the video quality of this Blu-ray disc is pretty spectacular.  The beaches, the sunrises, the life guards, the perfect bodies, the red bathing suits; it’s a feast for the eyes, that is if you’re looking for color saturation, breasts, and tanned pecs.  In all seriousness, the picture is quite nice, and the Blu-ray really shows it off.  There are a couple scenes in which CGI is used that look pretty stupid, but otherwise, you’ll like what you see.

Extras – There are many special features on the Blu-ray, enough to please fans of the show and the movie alike.  Meet the Lifeguards is a 21-minute behind-the-scenes segment.  Continuing the Legacy is a 9-minute look at how the film honors the series.  Stunts & Training is a 9-minute featurette on preparing for the thrilling moments.  And Deleted & Extended Scenes is a compilation of 6 bonus footage sequences. Recommended.  Baywatch works because so many of us remember the old stories, the old characters, the old jokes, and we actually wanted to be reminded of them now; ‘why’ might be a question for a different time.  We like what we like, and we liked the show, for whatever insane reason, making us the perfect audience for a film version.  It’s far from perfect; actually it’s a bit farcical and more than a touch pandering.  But then again, we weren’t expecting anything less, and got exactly what we paid for.  I can’t imagine critics and audiences who went in preparing to hate it coming out with a different opinion; you can tell yourself right now whether you will enjoy more Baywatch beauties or not.  But at least no one is trying to trick you, you will get what you desire.  The video was surprisingly nice, the audio was solid as well, and there are some extras thrown in for good measure, so the technical side holds up.  Watch for a good time, don’t expect much, remember the good ol’ days, enjoy the slo-mo, sit back, and try not to think it through.