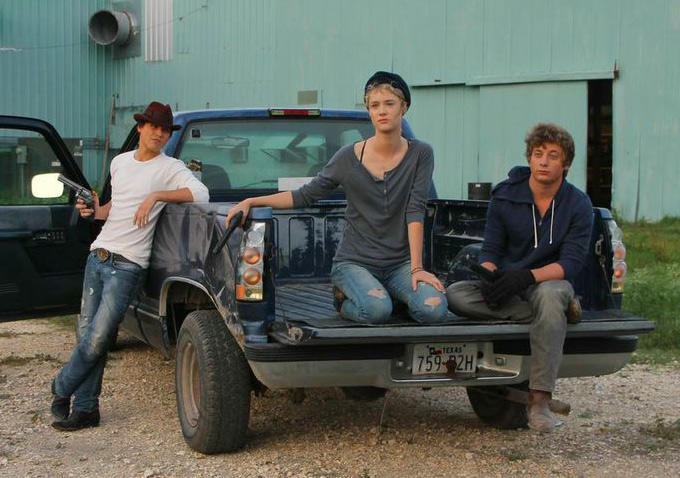 Why do bad things always happen in Texas?  Is it because it’s hot & flat?  Maybe it makes people itch for trouble.  I don’t know, but it seems to be a great place to stage your criminal thriller, amid the cacti and the oil derricks.  There’s a sense of lawlessness about the films set there, perhaps a holdover from the more wild days of the frontier, the independent spirit of Texans themselves, or the wide open spaces that seem to suggest that anything can happen.  Anyway, Bad Turn Worse is Texan trouble at its most pure, a story about bad choices, worse luck, and the ramifications of living your life as if there were no consequences.

This is the story of three friends: Sue, Bobby, & B.J.  They’ve known each other their whole lives, growing up alongside each other in a hick town where no one has a future.  Except Sue, she’s got dreams and the smarts to make them come true.  She’s off to college after the summer, hoping to some day become a writer.  Bobby “Shit For Brains” is going to follow her, not because he has any great aspirations, but because he’s in love.  That leaves B.J. behind.  He’s not the brightest, but he’s confident, good-looking, and knows what he wants.  Sue is his girl, kind of, and he’s not real happy to be left for the more exciting prospects of life outside their small town.  But hey, he understands, and even offers to treat the trio to a night on the town before two of them leave for good.

But, wait a second, where is B.J.’s money coming from?  He’s dirt poor and yet has thousands to blow on alcohol, girls, and general partying.  Well, someone probably should have asked that question before they spent all the dough.  Because now local bad man Giff claims he’s missing twenty thousand dollars, and when the boys confess to spending it, he’s got another fun fact for them; the money didn’t belong to him.  It was the property of an even badder man named Big Red, the boss who runs a local criminal operation.  So now the trio has to get back the money through unholy means, pay back Giff, and avoid a bullet through the brain.  One bad decision can create a much larger problem, as these life-long friends are about to learn. As far a Texas-based bumbling criminal thriller goes, Bad Turn Worse doesn’t disappoint.  It takes all the elements of that genre and stays true to the feel we’re looking for.  Bad guys with accents, big trucks, a beautiful blonde, dimwitted friends, disposable Mexicans; it’s a Texas tale, both good & bad, and comes with Texas-sized trouble.  The movie begins by saying that all stories are, at their core, the same, that every plot is just a revelation that all is not as it seems to be.  And over the course of the 90 minutes of this film, that proves to be true.  Twists, back stabs, confusion, error; it’s not a bunch of geniuses pulling off the crime of the century, that’s for sure.  But what it is is entertaining at least, believably poor decision making compounded by idiocy & deceit.

But what keeps this movie from being truly great is the acting.  Mackenzie Davis is actually really strong for being basically an amateur actor.  You may have seen her in What If or That Awkward Moment, and I think she’s a talent to watch.  She’s pretty but not dazzling, girl-next-door but not forgettable.  And Mark Pellegrino as Giff is pretty good too, pulling off the crazy criminal fairly well, if a bit stereotypically.  No, the problem isn’t with them, it’s with the boys.  Logan Huffman as B.J. is a complete shell of a character, leaving nothing in my mind at all.  And call it worse or better that Jeremy Allen White stayed with me, but for all the wrong reasons.  He was terrible as Bobby, less than one-note, never revealing anything or adding anything to the drama of the plot.  I get that he was a bit of a bystander, a quiet hero who wasn’t really smart enough to take matters into his own hands.  But if that’s the case he was featured too much, given too much screen time for someone who doesn’t seem to have much talent, allowed to effect the success of the film without adding too much to it. Video – With an aspect ratio of 2.35:1, the video is top notch.  Each scene is clear, crisp, with a nice color balance, and made to exhibit the Texas landscape in the background.  The film is kept mostly dark, but still offers an interesting use of filters in many shots.  The picture quality is high for a non-mainstream film and should be given credit for that fact.

Audio – Done in Dolby Digital 5.1, the DVD doesn’t offer any other audio options.  There is a choice of subtitles: English SDH or Spanish.  The audio clarity is fine, with no glaring mistakes but also no stellar moments.  The slight use of guitar music in the background adds to the drama of the film. Rent It.  Bad Turn Worse is a cool crime caper perpetrated by a misfit bunch that actually makes you feel a little sorry for them.  There isn’t some elaborate scheme, no masterminds will emerge, but you’ll leave slightly entertained.  It’s not a great piece of cinema and there are a couple actors who stunk it up, but overall this is an OK movie with an OK story that kinda works.  Not fantastic praise perhaps, but that’s about all it’s worth.  The video is nicely done, the audio is just fine, but there are no extras on the DVD.  A short, easy, throwaway film perhaps, but not a complete disaster.