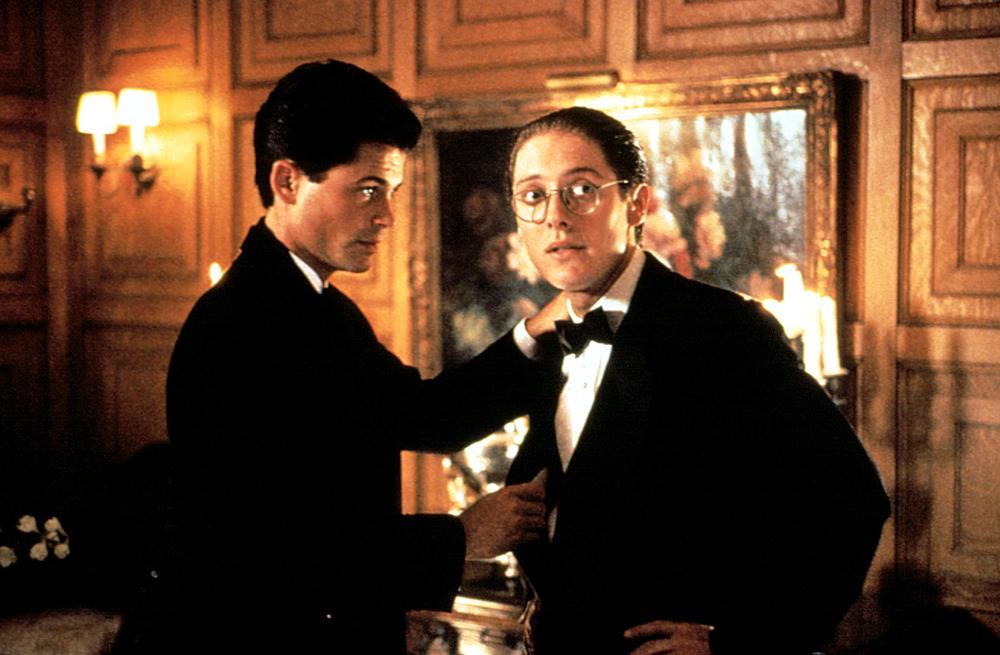 Curtis Hanson did some pretty impressive work in the 90s, directing The Hand That Rocks the Cradle, The River Wild, and L.A. Confidential.  Later, he’d do Wonder Boys, 8 Mile, and In Her Shoes; not quite as impressive, but at least the guy has range.  No, his moment was the 90s, and it all started with a little-seen film called Bad Influence.  This movie channels the modern/noir vibe of the era, a time when so many films decorated apartments in stark black & white, cast their characters as stock brokers, inserted a femme fatale, played some light jazz, and watched as it all went to hell.  Bad Influence does the genre credit, launched Hanson’s career, features many name actors, and succeeds in entertaining, even while is settles in as much more of a time capsule piece than something independently great. Michael is a mild-mannered California analyst whose life seems already set on a course for unhappiness.  He enjoys his job, but will probably be beaten out for a promotion by the conniving Patterson.  He loves his girlfriend, but doesn’t want to become the typical married man.  He has a nice apartment, new gadgets, lovely decor, but is beginning to feel stifled by the mundane aspects of his day to day existence.  One night, at a bar, he plays with standing up for himself, making up for the fact that he earlier backed down when faced with a confrontation at work.  Well, jealous boyfriends aren’t the guys you mess with while testing out your wings, and Michael prepares himself to learn a very valuable lesson in physical pain.

But at the last second a stranger steps in and saves the day, protecting Michael from a beating, and then disappearing into the night.  When Michael sees this man later and thanks him, he learns that Alex has an extra helping of bravery, charisma, personality, adventure; all the things Michael has been lacking his entire life.  The two quickly become friends, as close as brothers, painting the town red together like they were young, uninhibited studs.  But what is Alex’s motive for befriending Michael, what does he get out of it, and is he pushing this normal, conservative guy too far?  As Michael gets in way over his head, he begins to suspect that Alex may not be the greatest influence, though that knowledge may have come dangerously late. You know what to expect from this film five minutes in, which isn’t necessarily a terrible thing, the plot sliding right into the genre with glove-fit accuracy.  Basic Instinct, The Hot Spot, Malice, Cape Fear; movies with murder, dames, saxophones, and twists, ready on VHS to pop into your VCR whenever you’re in the mood.  There’s a place for these films, and a following as well I imagine, though not all of us would call ourselves 90s thriller junkies, some of us not having yet reached teenage years when these movies were released.  I did sneak a few episodes of Silk Stockings when I was young though, and Bad Influence has a touch of that USA original series, minus the bright cops & the bright colors.  No, this film is more character driven then those aforementioned noir films perhaps, relying on fear more than mystery, channeling Poison Ivy or The Babysitter, without the white-hot murderess.

This film is a great chance to see two young actors finding there styles, and in a way playing roles that would become the opposites of their type casts.  James Spader is the pushover here, not the deep-voiced powerhouse we see in recent TV shows, and not the scientist that we saw in Stargate, a movie I’ll always picture when hearing Spader’s name.  This role is more his 80s persona: Less Than Zero, Sex Lies & Videotape.  And for Rob Lowe, this villain character is something we don’t often see from him, playing the evil, twisted, madman fairly well.  A couple other minor stars pop their heads in too: Lisa Zane & Kathleen Wilhoite from ER, Marcia Cross from Desperate Housewives.  There’s a lot of TV crossover here, which makes sense after watching the movie, since it definitely has 90s television quality, and barely stands up over all these years.  Still, it is what it is, never claiming to be Oscar-caliber, and can still entertaining. Video – With an aspect ratio of 1.85:1 (1080p HD Widescreen), the video quality of Bad Influence is what you’d expect from an 80s or 90s film transferred to a Blu-ray disc.  The picture quality is passable given the time period, but a VHS could have conveyed the story just as easily.

Audio – The Blu-ray disc was done in DTS-HD Master Audio Stereo, with an option of English subtitles.  The sound quality is fine, again matching the era, and the music is that sleazy, jazzy, droning tune you’ve heard from this genre time & time again.

Extras – There are two special features on the Blu-ray disc: Under The Influence Of David Koepp, a half-hour interview with the writer, and a theatrical trailer for the film. Recommended.  This film is at least partly entertaining and at least gives us a glimpse of young talent.  There’s not too much else in its favor, other than a cool time capsule vibe and a chance to see two actors playing challenging roles in the early parts of their careers.  Other than that, Bad Influence is a typical 90s thriller, complete with short-haired hotties and cold-blooded murders.  The video is fine given the context, the audio the same, though neither will knock you out, and there are two extras available for those looking for a bit more.  More a rental on a rainy night or a throw back if you remember this movie from days gone by, the film itself doesn’t stand alone without the support of its period and its players, but can still give some enjoyment to a select few.