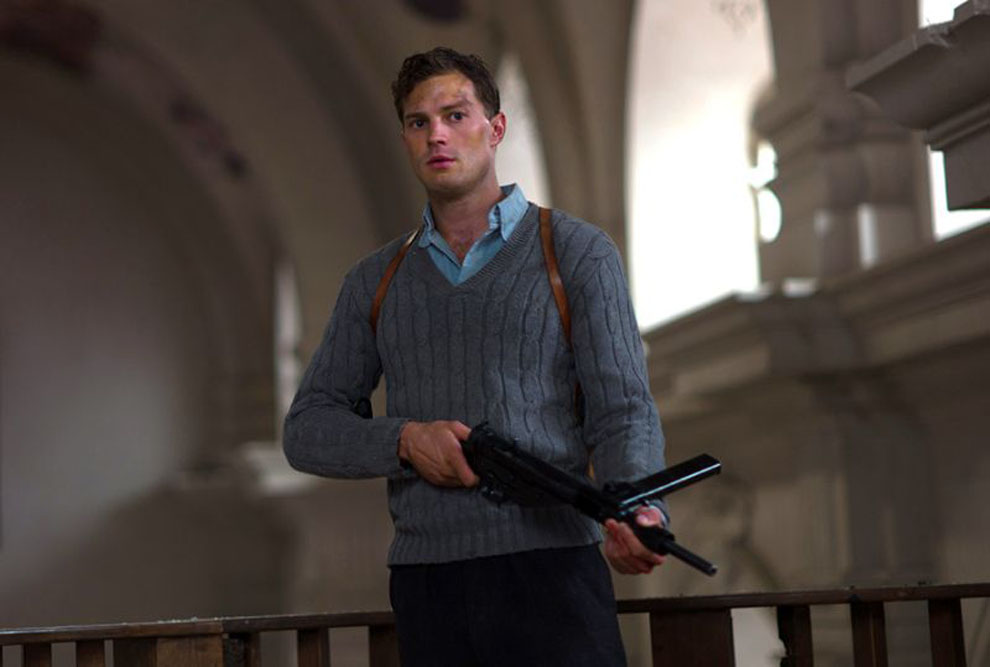 The last time I heard from Sean Ellis was with 2006’s Cashback, a little gem of a movie that looked at nudity as art and at love as magic.  The last time we heard from Jamie Dornan was with Fifty Shades, and I doubt he lives that role down any time soon.  Murphy & Le Bon appear here and there, though neither can be considered a huge star, even with Murphy’s talent and Le Bon’s frequent French character roles.  No, this is a cast & crew that have a lot to prove in a what-have-you-done-for-me-lately kind of world.  Taking on WWII and the Nazi military campaign isn’t the easiest project to throw yourselves back into the mix with, but I was pleasantly surprised with the solid work from all involved, and I think I can say with confidence that they are all back on the map.

Europe at the end of the 1930s was a continent in terrible anxiety, as the world powers played their games, alliances were formed, and the Earth prepared for another Great War.  Hitler and his Nazis had taken over Czechoslovakia with no fight, had invaded Poland next, and were consolidating their forces, laying their plans.  Meanwhile, a fierce resistance movement had emerged in Prague to combat German occupation, even as the country’s military was forced to stand down due to a lack of strength and support.  The Czech government was in exile in London, but the Czech people refused to lay down for the Evil Empire, making their stand where they could, at the risk of their very lives.

A group of young paratroopers from London were dropped into the forests surrounding Prague with the mission of contacting the secret resistance movement, of bolstering their forces with fresh blood.  But two of them, Jan and Josef, came with a different directive; to assassinate SS General Reinhard Heydrich, Hitler’s third in command and the Butcher of Prague.  The general was in charge of pacifying Czechoslovakia by any means necessary, and of orchestrating the Final Solution of the country’s Jews.  More blood was on this man’s hands than almost any killer in history, and for the Czech hierarchy, his death was absolutely necessary.  In a time of war, in a country under the German jackboot, heroes emerged to do the impossible and to change the course of history.

Any aficionado of WWII history should see this film, a dramatization of a lesser-known aspect of the war, and a very personal story of one small country’s bravery in the face of such immense power.  I don’t think the audacity and heroism of the mission can be argued, although the actual intelligence of the act can be, as the death of anyone in Hitler’s staff would only guarantee retribution, including mass killings, rampant torture, and even the possible annihilation of the country involved.  These fears were in the minds of the resistance movement, but these young men were willing to die trying, were willing to put their homeland in jeopardy, if only to show the Germans that Czechoslovakia hadn’t surrendered, that it had only chosen its moment to fight.

A stirring story, and well told by all involved.  Ellis made a mighty return here with a film that made some very smart decisions, mainly to focus on the characters and their sacrifices rather than on the actual war raging around them.  We were allowed to connect to these soldiers, these frightened young men, the brave young women in their lives, and the fearless families who housed them when doing so was almost a death sentence.  Cillian Murphy led the cast, and he was tremendous, as were the freedom fighters surrounding him: Toby Jones, Marcin Dorocinski, Harry Lloyd.  Jamie Dornan was only alright, and although he isn’t as bad as his film choices, he may not ever be a standout star.  Charlotte Le Bon isn’t my favorite, I think she’s a major one-note actress, but no one actor stood out as poor, the film as a whole worked very well, and the important story was delivered, which has to be viewed as the ultimate goal. Video – With an aspect ratio of 2.40:1 (1080p HD) and shot using an Arriflex 416 camera with Hawk V-Lite 16 1.3x lenses, the video quality of Anthropoid is top-notch while still holding to the aged feel of the period.  The background of Prague, the churches, the houses, the streets, everything was perfect, and the film took on a very authentic feel, making the history as important as the drama.

Audio – The Blu-ray was done in English DTS-HD Master Audio 5.1, with subtitle choices in English SDH, Spanish, and French.  The audio quality of the film was impressive as well, with balanced effects and a fitting soundtrack.

Extras – There are two major special features on the disc, both well worth your time.  The first is The Making of Anthropoid, a 30-minute featurette including interviews and the history behind the film, one of the longest Making Of segments I have ever seen.  The second is Storyboard to Film Comparison, a collection of three scenes (Church Battle, Assassination, Opening) shown in their original 1/6 scale action figure choreography alongside their final film capture.  It’s a fascinating method, filming action figures with exact lighting and posing in order to capture the scene to perfection.  Also, there are five previews available: Eye in the Sky, Danny Collins, I’ll See You in My Dreams, Pawn Sacrifice, Trumbo. Highly Recommended.  For those who love the historic magic of the time period, complete with all its sinister undertones, this film was made for you.  For those looking for more drama, rather than more war, this film delivers on that level as well.  Anthropoid is an authentic look at real events, but also a connection to the lives of those who experienced them, a refreshing take of history with all elements taken into consideration.  Director Sean Ellis returns with a bang, Cillian Murphy leads a good cast, and everyone contributes to honoring those who fell and those whose lives were touched by these events.  The video and audio were strong, while the extras were given considerable time as well.  This is something worth seeing, a reminder of a terrible time, if not the movie of year exactly, but a film well-made, and one that should both remind us of the past and reacquaint us with some solid talent.