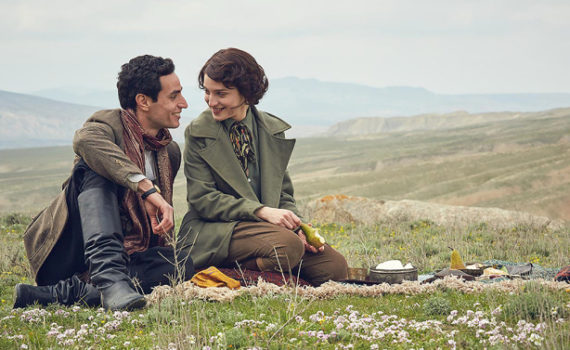 First, a little history behind the tale of Ali and Nino, since this film is, first and foremost, a fictionalization of history, as well as a metaphor for actual events.  It’s based upon a 1937 novel by the same name, written by the mysterious Kurban Said, a pseudonym for an author whose real identity is still up for debate to this very day.  Said wrote the story approximately 20 years after the events on which it is based: WWI and the relationship between the budding country of Azerbaijan and its dictator, Russia.  Some 30-40 years after its publication, the book would catch the attention of millions, becoming the national novel of Azerbaijan and one of the world’s greatest literary love stories, a masterpiece of drama and romance.  The film is an attempt to bring that tale to life, to gain a greater audience for an important piece of forgotten history, and in so doing becomes a surprisingly strong feature entirely on its own. In the beginning years of the 1910s, the world was approaching global war for the first time.  Alliances were formed by the major countries of the world, battle lines were drawn, and an assassination would ignite a fire that would burn the entire world.  Starting in 1914 and ending in 1918, the Great War engulfed the world, and affected the lives of countless millions across the planet with its ripples.  In the Caucasus of Russia, the ancient kingdoms there had become oil empires, wealthy families holding on to old traditions but ultimately under the thumb of the Czar.  Georgia, Armenia, Azerbaijan; these regions were closely related, strongly desired by the world powers, and greatly changed as WWI came to an end, signalling a new era in Eurasia and a time of great upheaval that would change the fates of men.

For a young Muslim from Azerbaijan and a beautiful Christian from Georgia, the results of the war would be felt in every aspect of their lives, for both good and for ill.  Ali’s family supported his desire to marry whomever he wanted, even if she was a Christian and wouldn’t allow him to host a harem of wives.  Nino’s family was less open-minded, worrying about the Muslim faith she was marrying into, worrying that the couple should wait until after the war.  But when Nino was abducted by a rival, a traditional method at the time, all plans imploded, as she was now seen as unclean and Ali was forced to leave his home country.  Their love would conquer much in the end, but not even true romance can stop the wheels of history, and when the Russians demanded their colony with its oil fields back after the war had ended, Ali would have no choice but to fight for both the rights of his family and the freedom of his land. There is a piece of kinetic art in Georgia (country not state) that represents this star-crossed, Romeo and Juliet, Tristan and Isolde style love affair, and if it’s so breathtaking in pictures, I wonder what it’s like right close.  Look it up if you get the chance, it’s a pair of giant, metallic statues that move through and then away from each other over a period of time, a gripping portrayal of love and loss.  That story should be remembered as one watches this movie, because it fuels every scene, the passionate and powerful fictional romance that captured an entire time period and won the hearts of an entire nation.  Watching the film without that context will simply result in something less emotional, and most audiences would probably then walk away with a “meh” upon their lips.

Understandably so perhaps, because the acting isn’t exemplary, the battle scenes aren’t amazingly choreographed, the film definitely needs the backstory to stand up to scrutiny.  But it has that base inherently, and even as someone who didn’t go in with much knowledge, I came away impressed and wanting to know much more.  To go back, I don’t mean to devalue the acting or the beautiful scenery, it was all quite nice, it just may not impress American audiences who have become used to Hollywood standards.  Maria Valverde, who you might recognize, is both solid and lovely, the young man who plays Ali is fine, and Mandy Patinkin pops in for a nod, just for fun.  To enjoy it, you’ve got to appreciate the way it brings the book to life, the way it depicts the old story, and the way it puts the history of the land into personal context, making the war seem much more realistic when viewed through the eyes of people and not nations. Video – With an aspect ratio of 2.40:1 Anamorphic Widescreen, the video quality is passable without being wonderful.  The visuals and the colors are nice, very vibrant, very representative of the time period, they just aren’t produced with a stunning clarity or ultra-talented eye.

Audio – The disc was done in Dolby Digital English 5.1, with subtitle options in English SDH or Spanish.  No other language choices are available, and the sound quality is as simple as the sound options.  Some lovely music is weaved throughout the story, heartbreaking notes set to the plot, which was the highlight of the audio.

Highly Recommended.  I want to travel to Georgia to see the moving art, a piece at first titled ‘Man and Woman’ but later dubbed ‘Ali and Nino’, as the artist was inspired by the great love story.  It’s that tale that kept me interested in the film and continues to fascinate me now, a plot that, without which, the movie itself might have lost some of its flavor.  It won’t impress you as an epic Hollywood war drama, but its simplicity shouldn’t count against it, neither should its reliance on the book do it discredit.  The video was fine, the audio showcasing a wonderful score, the extras were lacking, so look elsewhere for extraordinary technical features.  Watch with an eye toward history and romance, knowing that the movie is simply a vehicle for both.