It starts with sex.  And while, yes, it then follows up with more sex, that’s not what it’s about.  The beginning of a film can be both deceptive and revealing, and the beginning of 28 Hotel Rooms is no different.  When the first scene of a movie opens and the title appears, we start to form opinions and expectations; we do this with every movie we watch.  But they can change, these ideas, they are forced to change as the movie itself changes.  And that is why we keep watching; to see if our assumptions pan out or if we get to be surprised. 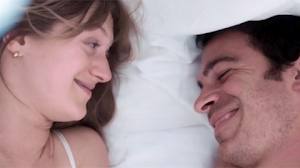 The beginning of the film is the beginning of a relationship; sex, laughter, sharing, uncertainty.  And as the two unnamed characters get to know each other, we start to know them too.  The man, a writer from New York, has a girlfriend, but travels alone promoting his new book.  The woman, an analyst, is married but leaves her husband at home to work all across the country.  The two begin an affair that spans, you guessed it, twenty-eight hotel rooms.  Their relationship starts out based on physical attraction, desire, and loneliness, but quickly turns into much more.
As what started out as a few trysts becomes a relationship, life gets complicated.  The closer the two become the harder it is to let go, the harder it is to be away.  And when they’re away, when they are participating in their every day lives, there is always the knowledge that waiting in the next hotel room is a person who turns them on, who understands them, and who is everything they want in life but are too afraid to take.

It’s safe to say I was surprised by this film, even though it was relatively what I thought it would be.  When I first heard about it, it sounded decent but not special.  Ok, so two people meet up in hotel rooms, cheat on their significant others, and become closer than they thought they would.  And while that is exactly what happened, I reiterate that it’s not what the film is about.  Decide for yourself what the true meaning is, but you’ll get more out of watching 28 Hotel Rooms than a cheap ploy.  You’ll get passion, sensuality, pain, heartbreak, love, intimacy; basically everything that a relationship brings to you in real life.  All in all, the film is a summary of love; eighty-two minutes of life put on film.

Perhaps what surprised me most was the acting.  Every line but one was spoken by the two main characters.  So, obviously, they had better be able to carry a film with no help, and they did.  Messina, who you might recognize from a dozen projects but might never be able to put your finger on, was excellent as a goofy, angry, idealistic writer who wants love above all things.  Ireland, who has been around but hasn’t done anything big, was solid as a structured, success-driven, closed-off young professional who takes what she wants and pays the price later.  Both actors did what it took to pull off an adult and modern version of what amounts to a classic love story.
Speaking of adult, this film is not for everyone.  Both characters are shown nude, having sex, screaming obscenities, and leading lives that are not morally exemplary.  However, putting those themes aside, the film is one that can speak to anyone.  It has global appeal, as it is about what we all desire; love, companionship, and the feeling that we are wanted.  28 Hotel Rooms is a deceptively poignant film that somehow is not typical, despite being simple and universal.  It is anything but lighthearted, and it may not be for the fragile or frigid, but give it a chance and it might surprise you. 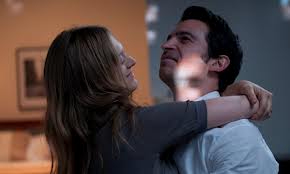 Video – With an aspect ratio of 1.78:1, the video quality was good, but it doesn’t catch your eye.  For one thing, all of the camera work takes place inside hotels, often with sunlight purposefully glinting off the camera, or else in the semi-darkness, as the couple is in bed quite often.  But even without being used to its full potential, the quality is high.
Audio – All options here are in English, with the choices being between Stereo, 5.1, and subtitles for the hearing impaired.  As with the video, various hotel rooms are not ideal for showing off Hi-Fi sound.  Only two characters speak, there is almost zero action, and the music that is present is either playing softly in the background or else creating a haunting mood.
Extras – The features here are minimal, which is surprising given the very attractive Oscilloscope DVD case, which is big, paper, and has an insert that folds out to reveal various screenshots.  However, don’t go searching through the folds looking for a bonus disc, because you won’t find one.  All that the unusually large case holds is a single DVD, which has about as many extras as the box.  There is no commentary and no “making of” sections.  What you get are some interesting deleted scenes, including an alternate beginning and an alternate ending.  There is also an interview with director Matt Ross during the Sundance Film Festival that is intriguing, especially his ideas concerning improvisation and organic cinema.  And lastly, you can watch the original theatrical trailer, and also four more Oscilloscope trailers including Monogamy, Bellflower, We Need To Talk About Kevin, and Four Lovers. 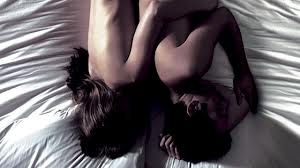 Recommended.  28 Hotel Rooms is a surprisingly touching film that, although flying underneath the big budget radar, is worth watching.  It is sexy, deep, sad, and darkly real.  The fluidity of the acting and natural feeling of the movie are worth seeing.  The audio/video elements are all that you need, but won’t blow you away.  The extras are interesting, but the DVD itself won’t be the crown jewel of your collection.  All in all, a solid and intriguing film that could find a place in the hearts of a surprisingly large number of audiences.