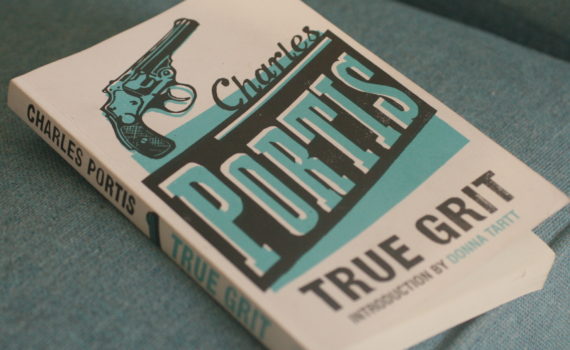 True Grit is one of the easiest novels I’ve ever read, and I don’t mean because it was so simple it took no effort to read, I mean that the time I spent with it in front of me felt like time I spent listening to a fascinating person tell their equally fascinating story with a smooth flow and an honest charm that kept me from being able to even blink, I was so curious to hear what happened next.  It’s less a book and more a memory, and it feels every inch our own true story, like we were along for the ride every hoof print of the way.  Charles Portis barely wrote a thing other than this book, but it doesn’t matter, he gave us something special, and for that he will always be remembered.  So will True Grit, a simple tale with only three real characters, and a Western experience like no other.

Mattie Ross is not the type of girl to take life’s punches and not punch back, even during the time of the American West, when women weren’t expected to say boo.  Mattie has much more to say than that, and she has a knack of getting her way in any situation, even aged only 14 years.  When her father is robbed and killed by a hired man while traveling on business, Mattie makes up her mind to travel herself; first finishing the business and then tracking down her father’s murderer.  To help her, she enlists the aid of Marshall Rooster Cogburn, a man known to understand the territory they will be forced to travel in to catch the crook and seen as a rugged peace officer who has, as they say, grit.  But he’s not the only one, Mattie is herself a tough cookie, and along with another lawman, a Texas Ranger named LaBoeuf but pronounced LaBeef, they will set out on an adventure of a lifetime.

Like no other book I can think of, True Grit feels like sitting around a campfire and listening to a mighty Western tale, one full of simple choices and brave deeds in turn, one told with embedded language that you begin to understand as you listen along, and which begins to feel like your own story by the time it winds down.  Mattie is an awesome character, just awesome, and Rooster is no less so, this bear of a man who you quickly understand is all Teddy underneath.  And talk about history; if you’re into this sort of thing this book reads like a time capsule or time travel, as you learn more about guns and vittles and horses and outlaws than you ever knew you wanted to know.  A combination of adventure and instruction, wry humor and real heart, Portis’ claim to fame is not simply worth your time, it’s worth your bookshelf.