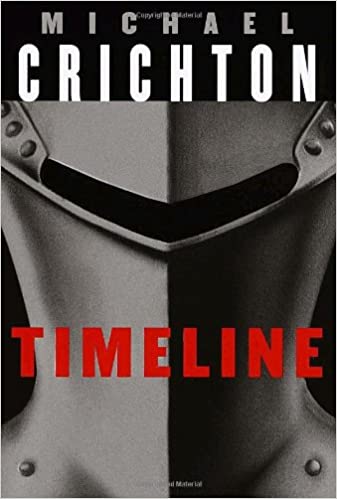 I was at the beach once at a book store looking for a beach read, when I stumbled across Timeline by the famous Michael Crichton, and thought I’d give it a whirl.  Turned out to be one the best beach reads ever, a novel that I simply could not put down, at the expense of my own vacation, probably.  It might not be the best written novel, or the most cerebral, but man is it fun to fly through.  It’s medieval history, it’s modern science, it action-adventure; what else could you want?

A team of grad students majoring in all fields history dig out an ancient castle in France along a lovely river, pulling apart the facts one grain of sand at a time.  But what they find deep in a collapsed chamber shocks them; a note from their very own Professor, just hundreds of years old.  Somehow he’s back in time, kind of, as the company that oversees the dig soon explains, and they arrange for a team to go back and bring him forward.  But it’s not really time, it’s dimensions, and it’s not really safe, back in the medieval times amid war & disease & constant danger.

What a great read, as long as you’re expecting some Dan Brown awesome, but just way better.  It’s better because it’s based on Crichton’s research, which we know is expansive, and it’s also based on combining history with technology, which is really fun.  The castle age details are incredible, you’ll learn so much, and the quantum physics element is equally as impressive.  The characters maybe you won’t care so much about, it’s not that kind of story, it isn’t that deep, but you’ll enjoy the plot as it unfolds and I bet you’ll have a hard time not reading.