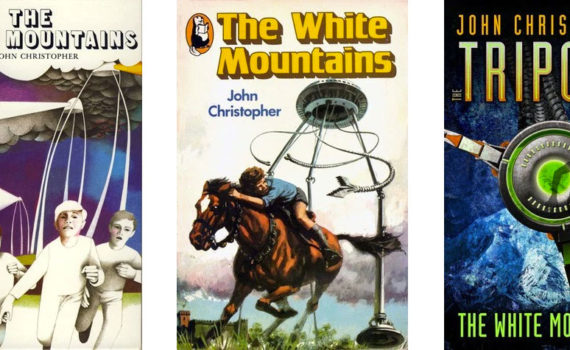 Technically this is a quadrilogy, with a prequel written 20 years after the original trilogy, telling about the origins of the Tripods and their conquest of Earth, but I don’t consider that to be a part of the foundation of the franchise; the first three books are where the magic happens.  I read them in school when I was young; technically I think my Gifted teacher read some or all of them to us, which is a nice memory, and I’ve always remembered this story as one of the first sci-fi series to have an affect on my taste level and my reading interests.  I recently read them to my kids, so now I’ve passed that love along, and I got to enjoy the stories all over again as well.  This trilogy should be considered foundational, a coming-of-age tale set amid a dystopian future, and one of the better young-adult fantasy epics out there.

Will has never known life without the Tripods’ presence, has never questioned their absolute authority over the lives of the people of his village.  Why would he; the adults in his life are happy, they don’t mind the metal caps on their heads, the Tripods almost never interfere, war and hunger have been eliminated, tales of the Ancients and their very different existence seem far away and unimportant.  But when a vagrant man comes through town telling Will the truth of the Tripods, and of a place where free men still hold out hope of defeating this otherworldly enemy, Will is filled with a passion to join them, and to fight against those who have made his race their slaves.  So begins an adventure to join a battle that will decide the fate of mankind; first a journey to the stronghold of free man in The White Mountains, then a dangerous mission to The City of Gold and Lead, and finally the discovery of The Pool of Fire, which may be the key to defeating the Tripods once and for all.

The Tripods Trilogy is such a fun fast-forward to a world that’s been conquered and barely remembers us, that sees the Ancients (modern humans) as a people full of troubling war and unnecessary disease.  Christopher quickly puts in perspective the relatively happy world of controlled man, but at a cost, which is, of course, the crux.  Will emerges as a great vehicle for us as readers, with his youthful energy and his rash nature, wanting to prove himself sometimes more than he wants to help.  But as he grows and matures he begins to understand the dangers all around him, and how he must become a piece of the puzzle if he ever wants to be truly free.  This series is a wonderful introduction to fantasy, dystopia, sci-fi, whatever genre you’d like to place it in, because it takes its time and weaves a fascinating tale, letting us live in this future world among the characters until we understand their plight.  It’s written strongly, has just enough action, some solid introspection, and takes us all over the world as humans fight Tripods, with the fate of Earth in the balance.  I enjoyed my re-read, I enjoyed sharing this with my kids, and I will always remember the trilogy as an important cornerstone that paved the way for so many more to come.