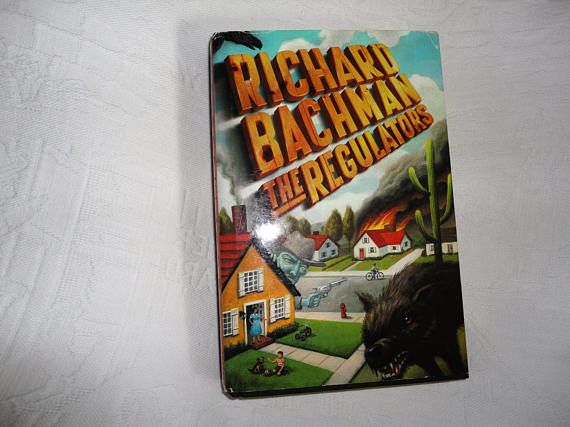 Stephen King wrote Desperation under his own name and The Regulators under a pseudonym, releasing them at the same time as a sort of experiment; which would do better, the former because King’s name had become a household word, or the latter because readers simply choose the novel they think best?  Both are based on the same idea, both use the same characters, but they are set in parallel universes, so it’s up to us to pick our favorite.  For me, there was no contest; Desperation is among the best King has ever written, while Regulators is among the very worst.

In a suburb of Columbus, Ohio, terror comes to an otherwise quiet street, as a group of space-age vans drive up and start peppering the neighborhood with gunfire, killing indiscriminately and often.  But there’s a deeper reason than just simple violence, and a darker force at work behind the mayhem.  A local woman has recently taken in her nephew, whose family was killed in a freak accident after driving through Nevada.  The young boy picked up an invisible hitchhiker there, a force older than the Earth, an evil that needs to feed and has picked this small town as his buffet.

Where Desperation tells a wonderfully complex but compact tale, Regulators fails to tell a story at all, relying instead on our foreknowledge of Tak, the evil spirit, and our desire for blood, of which there is much.  Too often, the tale isn’t even unfolded, it’s interrupted by articles, letters, journals, scripts, content that is supposed to flesh out the plot but really only delays the crappy action.  The novel is short, relatively pointless, and not well thought out, presenting death and not much else.  It’s a weak attempt and a poor experiment; King “killed off” Richard Bachman after this novel (although one more would come later, found in the attic, so to speak), and it’s a good thing he did, if this was all Rich could give us.