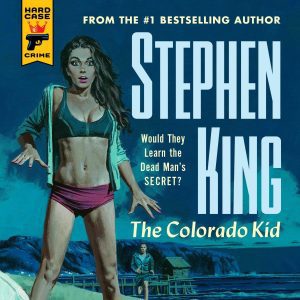 Very much a lesser Stephen King book, The Colorado King is barely even a book at all, it’s a pulp fiction throwback to a paperback rack filler, and that’s all fine, but we still need substance, and King somehow forgot to add that in.  This is not only one of his shortest books, it’s also one of his most phoned in, without characters, plot, or reason to read.  I’ve read a ton of King, he’s the master, I rarely question him, but with this one I’ve gotta ask why, and then wonder why he never asked himself that.

Two old newsmen in a small Maine town discuss the history of the weird stories of their town with a young gal who’s just coming up in the business, but who might take over for them rather soon, she’s such a smart whip.  She wonders why they don’t share all their unexplained mysteries with the larger public, and they explain that not every story is pleasing to hear, some make so little sense as to be unappetizing.  Take the tale of the Colorado Kid for example, a murder that maybe isn’t and a man far from home.  His truth will never be known, and while that makes for good conversation, it’ll never satisfy.

This is just a really weird book, it should have just been a short story, then maybe we could have read it, said “huh”, and moved on with our lives.  As it is, we’re supposed to read this like dime store fiction, like pure creepy fun for the simple sake of it?  I guess, but it first needs to be fun, creepy, cool, freaky, something, not just slightly curious, that’s not enough.  The characters aren’t around long enough to get to know, the mystery just isn’t interesting, and King fails with this one, a mere blip in his bibliography, not something worth the time.