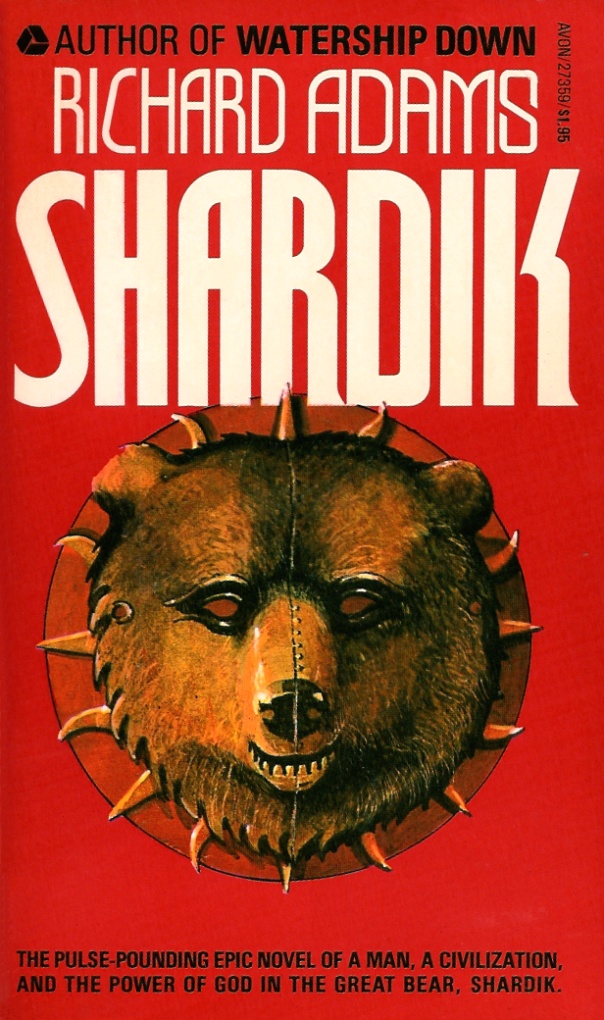 Richard Adams is known for one thing and one thing only; Watership Down.  I’m not very familiar with his other books, but neither are most people, as Watership Down dominates Adams’ bibliography.  It’s an award-winning modern classic, a beautiful book that happens to be one one of my all-time favorites, and also happens to be the first novel Adams ever wrote, published in 1972.  It won him acclaim, he would go on to be a successful author, but nothing would ever duplicate the success of his story about a band of rabbits.  The only book to ever come close, incidentally, is Shardik, another story about another animal.  But this time the landscape has changed.  The book is not set in England, but a fictional world, and we aren’t privy to the thoughts of the creature, but rather witness to how his life impacts the humans around him.  One thing remains the same though, and that’s the quality of the work, as Adams delivers near-perfection once again with his second novel, a book that I loved nearly as much as his very first.

There are two main characters here, one a man and one a bear.  Kelderek is a simple hunter from an island village, a place in which Barons scratch out what control they can and the people of the land live simply.  They were once a proud nation, leaders of a great city-state called Bekla, and devotees of a religion based on Shardik the bear, the Power of God.  Priestesses from a nearby island are still revered for their faith, but Shardik left them generations ago, abandoning his people and allowing them to be driven away from their rich capitol.  But the winds of change are coming, driving a fire that drives a colossal bear onto the island of Ortelga and into the presence of Kelderek.  He feels God through this bear, declares him to be Shardik, and carries the message back to the priestesses.  So renews the religion, and with Shardik as their guide, the Ortelgans march toward Bekla to reclaim what is theirs.  But is Shardik God’s chosen one, or merely a bear?  Does he walk toward Bekla because of divine instruction or out of pure instinct?  And when he turns from the path, will his people follow him blindly or bind him to their goal instead?

This book struck me as one written without an audience in mind.  That might sound strange, and even bad, but Adams starts the story as if we already know it, parcels out details as if they are unimportant, let’s us know where the story is headed only when it suits him, and somehow masters the art of hooking his audience without even seeming to try.  It’s a fantasy story that sucks you in, with its history & its lands, its varied peoples and its obscure locations.  You have to immerse yourself to keep up, and honestly in the first few chapters I wasn’t sure I was ready for the work.  But wow am I glad I hung on for the ride.  Shardik became a novel like no other, a fantasy that seemed so real, with Roman allusions and religious undertones that had a lot to say without stopping to speak loudly.  Kelderek becomes a character that is so incredibly complicated and layered that I doubt I’ll ever read his like again.  And the epic sweep, the lands traversed, the terrible evil encountered, the doubt that gnaws away at the brain; this is a book that requires the reader to focus, to think, to empathize, and to acknowledge that you might actually learn something.  Stephen King homages Shardik at the beginning of the third book of his magnum opus The Dark Tower, and I wish Adams had created such a masterwork.  But after Shardik there is only one more, Maia, a prequel set 12 years sooner and containing a few common characters.  I could read a dozen more stories set in this land, but I’ll have to make do with two, and what a great start this was.