Book Review – The Hitchhiker’s Guide to the Galaxy 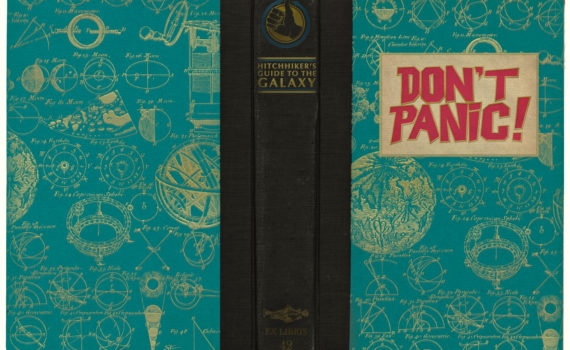 Book Review – The Hitchhiker’s Guide to the Galaxy

Originally a radio comedy series by the same name, The Hitchhiker’s Guide to the Galaxy‘s origins explain a lot; for starters, why it isn’t very good.  Douglas Adams’ book is highly regarded in its genre, a comedic benchmark and a novel that has spawned many offshoots in many forms of media.  It’s the first of a six-part “trilogy”, and acts as an introduction to a collection of characters who will go on to many other adventures.  But, and I feel slightly alone holding this opinion, it’s not a strong enough book to warrant reading any more.  It reads as an adaptation of something better, even a failed grasp to snatch ideas away from others, and is never funny in the way it was originally intended.  Suffice it to say, I was completely disappointed in this novel, a humorous take on sci-fi philosophy that I had high hopes for based on its fame, but which ultimately left me utterly unsatisfied.

Arthur Dent is a quiet Brit who lives by himself, never harming a fly, never experiencing anything unexpected; until the day his home is slated to be bulldozed, his only friend reveals that he’s an alien, and a group of intergalactic marauders destroy the Earth as part of a space-paving project.  Not the greatest day, but at least Dent survived, with the help of Ford, his odd mate who is actually from another planet and who aids in the development of the galaxy’s greatest guide.  Together, Dent & Ford hop a ride aboard a spaceship, ready to head out on more adventures.  But by a strange trick of probability, there are beamed aboard the Heart of Gold, a ship that can contort chance.  They meet Zaphod, the President of the Galaxy, his partner Trillian, and a grumpy robot named Marvin, a trio who will now join the team as more wacky journeys commence.

As a huge fan of Kurt Vonnegut, I found Adams’ novel to be a cheap copy of Vonnegut’s work, especially The Sirens of Titan, which was published 10 years prior.  Adams injects absurdism instead of socialism, but his novel is too familiar, and his style is something I’ve read better elsewhere.  Hitchhiker’s is all over the place, literally, and never comes together to make any single point, relying solely on the hope that readers will be amused enough to keep reading.  Well, I wasn’t really, but the book was short enough to make it through.  I didn’t find it smart, interesting, or important, rather a farce that has no place being called science fiction.  I understand that it was supposed to be silly, but I see nothing in its favor beyond that, and I can’t understand why it receives so much acclaim.  Do yourself a favor and check out Vonnegut instead; his novels are unusual as well, but have very clear & fascinating messages that are actually worth your time.