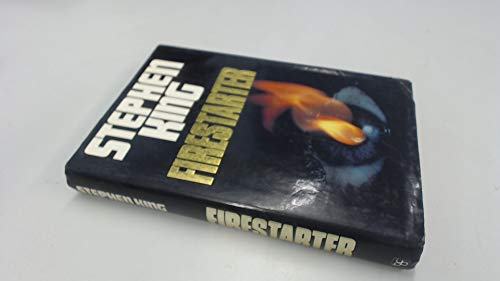 Firestarter is one of King’s weakest book, and no wonder; it was written smack dab in the middle of The Stand and The Gunslinger, two epic tales that took too much attention to worry about anything that wasn’t connected to The Dark Tower.  It’s a throw-away novel that lacks so much of the magic that King seems to weave so easily, and that’s a big disappointment.  They made a crappy movie version of it anyway, with Drew Berrymore if you remember, not that novels should be judged by their film counterparts; don’t blame the author for taking the money and running.  Firestarter is just a weak story all around, and so can’t be brought into our living rooms in any successful format, because the base simply isn’t there.

Many years ago, when they were in college, Andy and Vicky volunteered for a government drug test where they were given a light hallucinogen and then sent on their way with hard cash.  Seemed a simple thing to do, but the trial bonded the pair, and they would go on to get married and have a whip-smart girl named Charlie.  But the lingering effects of that drug, a substance that the government lied through their teeth about, would change the course of their lives.  Andy developed the ability to “push” the minds of others toward what he wanted, though at a cost to himself.  Vicky began to be able to close doors and move objects, mostly without even knowing she was doing it.  And Charlie, the mutated product of two superpowers, could wield fire, with a stunning ferocity that even she could not control.  Now a secret program wants Charlie as their own personal weapon, and Andy will have to use all of his ability to make sure she stays safe and free.

The foundation might be cool, but the rest of Firestarter never lifts off; it remains cold and grounded despite King’s best efforts to breathe life into its plot.  We get too little of Andy & Vicky and far too much of Charlie in captivity; the best part of the story is the drug, the effects, trying to live a normal life, getting scared, worrying about being watched, heading out on the run.  But that part seems like an afterthought; we spend far too long on Charlie being broken down by an NSA-type government group, where the characters are all evil Deep Throats and insane sadists.  The main bad guy is a giant Native American who loves to hurt people; it’s pretty strange.  King focused on the wrong pieces, and I simply don’t think his mind was entirely on the work at hand, because the entire book felt rushed, pushed, and poorly-executed.  It’s a rare miss for an amazing author; chalk it up to a simple mistake.