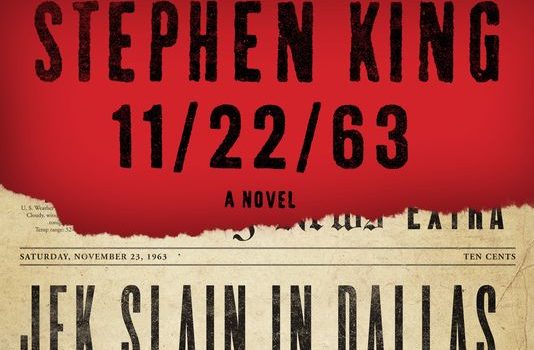 My love for Stephen King has been well-documented; the guy is a genius.  I enjoy his short stories and novellas most, he simply has a way of plopping us down in the middle of a character’s life and leaving us there to experience whatever bizarre happenings might take place, and it’s brilliant.  And then there are his giant epics, his stories that span years to play out, his books that took years to write, and those are fun too, in their own way.  The Dark Tower series, The Stand, Under the Dome, It, Hearts in Atlantis; some are better than others, but he can write brilliantly in that style too, and 11/22/63 showcases that ability perfectly.

Jake Epping is a teacher who stumbles across, and later literally stumbles down into, a time/space anomaly that will allow him to change the world.  The owner of a local diner, Al, one day appears before Jake’s eyes to have aged years over the course of hours, and Al explains this by claiming the impossible; that he’s been living back in time.  A dimensional doorway in the back of his diner allows the visitor to go back to the 1950s, to do whatever they want for as long as they want, and then to return to the present with only two minutes elapsing.  Sounds cool, maybe even fun, but Al has bigger plans, a mission, that he wants Jake to take over.  He wants Jake to go back in time, save JFK, and alter the future of the entire world.  But it’s not as easy as stopping Lee Harvey Oswald from pulling the trigger, the past doesn’t want to be changed, and, for the sake of the multiverse, should it be?

King pens another masterpiece with 11/22/63, an epic adventure that takes us within a man’s soul as he battles against the current of time to change the world for the better.  Or so he thinks, that’s the idea, but it’s not that easy, and so much is explored here, King goes deep down, which is part of why this book is so great.  Another reason is its simplicity, after you get past the time travel; this is basically a character book, as we get to know Jake, see him fall in love, watch him fight between self-preservation and magnanimity, cheer him on as he closes in on that fateful day and his chance to make a difference.  It’s a trip back in time for readers too, a perfect representation of the era, and a magical retelling of history.  King nails it again, with wonderful writing, solid humor, heart-wrenching moments, and a great overall arc that has so much to say.